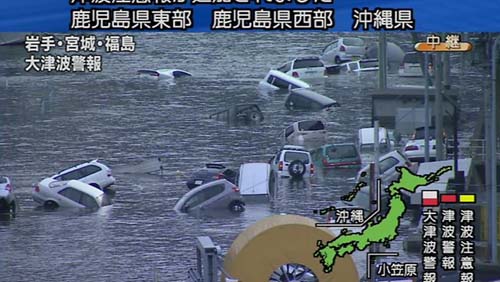 The Great Tohoku Kanto Earthquake, which is now what the Japanese call the March 11 disaster, is the strongest earthquake in the country’s recorded history. That’s saying something for a country where quakes are so common there are established rules for what you’re supposed to do when they strike, like people in Kansas are taught from childhood what to do if a tornado touches down.

The fortunate (if that’s the word) thing about this quake is that it struck off the northern coast of Japan, not east of Tokyo. It’s unimaginable what kind of devastation it could have caused if the quake had been closer to Tokyo. As it is, there was some damage in the capital but not to the extent of the Great Kanto Earthquake of 1923, which demolished much of Tokyo, or even the Great Hanshin Earthquake, which was a lessor temblor but killed over 6,000 people in Kobe.

Although the tsunami hit in a more rural part of Japan, the damage and the human cost is enormous. I’m sure when the final tally is in, the death toll will be over 10,000. It breaks my heart to think of the entire towns close to the northern shore that were simply washed away by the tsunami.

I watched in horror when I first saw the email breaking news alerts about the earthquake and tuned in CNN. The footage was terrible, and yet difficult to turn off. The power of nature to overwhelm human endeavors is incredible, and truly awful.

Overall, I have to say that the U.S. broadcast news media have been stuck looping video clips over and over and not adding much of value to the news that I’ve been looking for, about damage to Nemuro, where my uncle still lives. I can tell when the anchors are just stretching their limits of knowledge and filling time. I’ve also been irritated by the mispronunciations of words such as “tsunami” and “Tokyo.”

So my main sources for coverage have been news media from Japan, thanks to the Internet.

My favorite is Yokoso News, a project of Katz Ueno, a Japanese man who was educated in LA and normally uses Yokoso News as an outlet for cultural news and education about Japan for Westerners.

His dogged determination to translate every news development from Japanese to English in real-time on his site’s video livestream has been absolutely heroic. He originally was on the air for 18 hours straight, then took a couple of hours off to sleep, and has been on mostly nonstop since. At times he’s been joined by a woman calling herself “Ema” who lives in Tokyo (Katz is based in Western Japan, far from the quake’s epicenter) using the Internet video phone service Skype.

Ueno has been reading the latest news as he sees it for 14-hour stretches, and has been answering questions people post to him via Twitter. He’s been the best source for information, hands-down.

Here’s his livestream. If he’s not broadcasting it’s because he’s gettng some shuteye, and because, as he says, “I need to make some money.” As I write this he’s about to take a break and promises he’ll be back with the latest news in 11 hours. I’m sure he’ll eventually return to his regular programming, but I swear, he deserves an international award for his efforts the past few days:

I have relatives on Hokkaido, Japan’s northern-most island . One uncle and his family are in Sapporo, which is inland and away from the tsunami. Another uncle still lives with his family in Nemuro, which is on the coast and probably vulnerable. My mom wasn’t able to get through to their phones for a day, but finally was able to connect with her brother. He reported that the tsunami did hit Nemuro, but not with the force that it hit cities such as Sendai. He’s fine, luckily.

My mom also has an old friend who lives in Tokyo who has kids about my age, and they’re all fine too. So are a couple of online friends through Facebook and Tumblr, and some friends from the U.S. who had the unfortunate timing of traveling to Japan last week.

My biggest fear is that a man-made, nuclear disaster will overtake the natural one.

Here are some other resources to follow developments in Japan:

First, you can donate to the Red Cross by texting REDCROSS” to 90999. This will automatically donate $10, and the charge will appear on your next mobile phone bill (see note below about Red Cross vs Salvation Army, and also DirectRelief.org if you’re uncomfortable with either org’s policies).

The Japan America Society of Colorado (and many other organizations across the country) are accepting donations for earthquake and tsunami relief efforts.

NHK World has been the go-to source for all the US media; this is the English version of NHK (Japan’s public television network)

Guardian UK Japan Earthquake Coverage has a different perspective than the US mainstream media. The BBC is also worth checking for their coverage.

The Nikkei Youth Foundation based in Tokyo has posted an online form looking for volunteers around the world to translate Japanese into multiple languages for relief efforts.

Since the beginning, Al Jazeera English has had different, and often more in-depth coverage than the US cable networks.

From Facebook, amazing street-level view of tsunami raging through town.

A note from Emily Nakano Co of Absolutely Fobulous (via the comment below) about donating to the Red Cross vs alternatives such as Salvation Army, and other links:

Red Cross is a good option but there is also the Salvation Army. The org has been in Japan since 1895 so it’s an NGO that understands Japan’s infrastructure, which is really impt. You can also text “Japan” or “Quake” to 80888 to make a $10 donation to the Salvation Army.

A reader pointed out on Facebook that if you’re uncomfortable about the policies of either the Red Cross or Salvation Army, this organization seems to be a good alternative: Direct Relief International.

The Salvation Army is also taking pre-orders for a t-shirt emblazoned with the Kanji, “Army for Japan“ if you’re a strong supporter of the SA. 100% f proceeds go to the SA’s relief efforts.

A Boulder-based startup, SparkRelief, has launched QuakeHousing.com to help coordinate housing efforts (I assume for both displaced victims and relief workers converging in the Northern Japan area).

Help Rebuild Japan is a website launched by American Volunteers for International Disaster Support to recruit volunteers to travel to Japan to help in the rebuilding efforts to come.

Ganbare Japan is a projecyt that ivites people to record video greetings of support for Japan, ending with the line, “Ganbare Japan!” (“Cheer up Japan!”)

The JACL has launched a DirectAid page to donate to Japanese relief efforts for those who would rather not donate through the Red Cross or Salvation Army.
Here’s a new Nikkei View post about the comments some people are making, saying that the disaster in Japan is “payback” for Pearl Harbor.

University of Michigan’s Center for Japan Studies has a page of Earthquake and Tsunami Links.

Time Out Tokyo has a Live Report blog with the latest news and emergency information that they have.

The Asahi Shimbun, one of the giant national newspapers in Japan, has createda Facebook page with latest news, “Asahi Japan Watch.”

The office of the Japanese Prime Minister Naoto Kan has launched an English-language Twitter account for official statements translated from his Japanese announcements.

The Consulate Generals of Japan have posted links on their website (we have a Consul General of Japan in Denver, with a web page for resources) and they recommend donating money directly via Japan Red Cross.

Here’s the Japanese Foreign Ministry’s English language website with official announcements and (probably a filtered view of) developments in Japan and what Prime Minister Naoto Kan is doing in response to the disaster.