Posted at 14:12h in pop culture by Gil Asakawa
Share

OK, so you might think writing about sunglasses is not nearly as important as writing about racism or Asian American role models or earthquakes in Japan. But I submit that the search for glasses that fit on Asian faces without sliding down our noses and smearing on our cheeks, or smashing our eyelashes (those of us who have long lashes, real or fake) can be pretty darned important, and for one Japanese American entrepreneur, downright critical.

I’ve worn glasses since third grade, except for a few years after 2000 when I got lasiked and experienced the miracle of not having to wear glasses. Today, my eyes have gotten worse so I need to wear glasses again but I take them off when I’m sitting at the computer and don’t need them for watching TV. And the glasses I do wear have much — much — thinner lenses than I’ve worn in the past.

But one frustrating part of being Asian and wearing glasses is that I couldn’t wear plastic frame or horn-rimmed style glasses or sunglasses without having them slip down my nose and stick against my cheeks. My low bridge and high cheekbones never quite fit with the small protruding attached nose pieces those kinds of frames had. Instead, I had to order wire-framed glasses because they had the adjustable nose-pieces that I could pull out (I broke them off a couple of times) to make the glasses sit better on my nose.

There have been times when wireframes have been hip, so I accepted my fate. But I wasn’t able to wear timeless cool sunglasses like the original Ray-Ban Wayfarer, without pushing them up very few minutes.

But one entrepreneurial Japanese American, Megumi Hosogai, is bringing fashion flash to Asian faces with her MEGUMI-O sunglasses, Jackie Onassis-style big round sunglasses that scream retro-chic on any face. Hosogai created a frame that Jackie-O might have worn, but with an extended bridge designed specially for Asian faces (or for people who have extra-long eyelashes). So far she has them available in a handful of LA boutiques, but she’s started a Kickstarter fundraising campaign to raise money to mass-produce her glasses.

Another Asian American, Alexandra Peng Charton, launched a line of eyewear made to fit Asian faces with her copany, TC Charton. But Hosogai is so earnest about the potential of her MEGUMI-O glasses that it’s hard not to root for her to succeed. 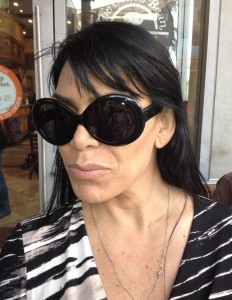 Last week Hosogai said she had the “best day of my life” when she was able to snap a series of photos of reality TV mob wife Renee Graziano wearing MEGUMI-Os.

When she’s not pouring all her money and energy into launching Megumi-O, Hosogai is is a commercial real estate agent. Born in Yokohama, raised in Hawai’i (where she attended the same Punahou prep school as Barack Obama) and educated at Loyola in New Orleans, she’s obviously a smart, sassy woman on a mission. She also acts when time allows… but then doesn’t everyone in LA?

MEGUMI-O is Hosogai’s priority these days, and she needs your help. The way Kickstarter works, she needs a minimum of $10,000 in donations by Sunday, April 1. So far she’s raised $1,371 from 20 backers toward that goal, with 42 days left in the campaign. If she doesn’t raise the minimum $10,000, which is what she needs to begin mass-producing her sunglasses, she won’t receive any of the donations and all the backers won’t be charged the amounts they promised. Here’s the page to donate.

It would be cool to see her succeed. Personally, I’d like to see what she comes up with for men once she has her company up and running and getting enough revenues to come up with more styles. Maybe an extended-bridge version of the classic Wayfarer look?