Gil Asakawa's Nikkei View | It’s time to take the offensive yellowface of “The Mikado” off the stage
5079
post-template-default,single,single-post,postid-5079,single-format-standard,qode-quick-links-1.0,ajax_fade,page_not_loaded,,qode-title-hidden,qode-theme-ver-11.0,qode-theme-bridge,wpb-js-composer js-comp-ver-5.1.1,vc_responsive 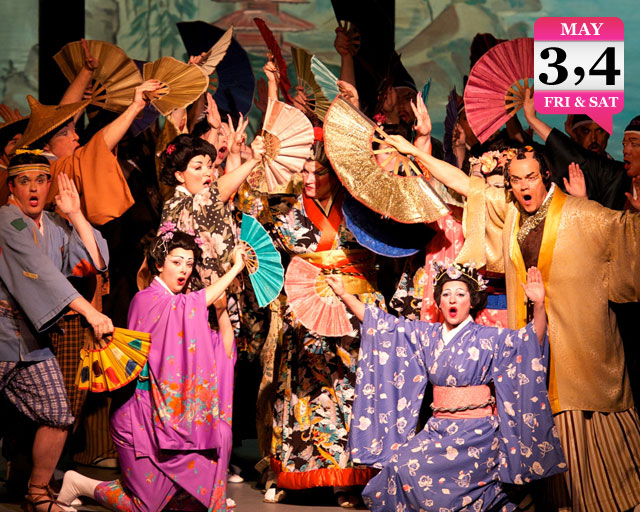 Instead, he named the village where “The Mikado” takes place “Titipu” and gave his characters improbably names such as “Nanki-poo” and “Yum-Yum.”

The acclaimed New York Gilbert & Sullivan Players (shown above) brought “The Mikado” to Denver for two performances at the University of Denver’s Newman Canter a few weeks ago, with updated lyrics to songs that made fun of Colorado’s legalized marijuana and other contemporary news items.

The social and political commentary was in the grand G&S tradition. But even though the characters at least spoke in British accents (which is how the play is usually produced) instead of horrible Japanese ones, it was difficult for me to get past the exoticized Japanese setting, cheesy fake kimonos-on-acid costumes and of course, the horrid yellowface.

Honestly, I thought for all it mattered, the play could have been set on Navi, the planet on which the sci-fi film “Avatar” took place. For Gilbert and Sullivan, Japan in the late 1800s was as alien as a fictional, faraway planet would be to us. So for anyone considering producing this now-outdated play (the music was utterly forgettable, by the way), drop the fake Japan and go for a place that modern and alien, which won’t offend any ethnicity (unless you’re a blue-skinned Navian who’d take offense).

There have been some protestations over “The Mikado”‘s yellowface, a book written about Gilbert’s use of Japan, and a funny satire for stage and adapted to film called “The Mikado Project.” But most people continue to blindly attend the “The Mikado” and appreciate it as high art.

The following week I attended one of the final performances of Rodgers and Hammerstein’s “South Pacific,” an all-American musical about U.S. military soldiers, sailors and nurses on a Pacific Island during the waning days of WWII. The play was originally produced in 1949 on Broadway, and it was turned into a hit movie in 1958 and remade in 2001. This production was by the local Performance Now Theatre Company, at the Lakewood Cultural Center.

Some of the characters, including a Tongan woman who falls in love with a G.I., was played by a Caucasian woman but she didn’t have any spoken lines so she didn’t need to make a cheap imitation of a Polynesian accent. Her mother, Bloody Mary, was played by Janell Kim who spoke in an exaggerated Asian, not Polynesian, accent but she’s a talented singer and actor, who most recently was in a local production of “Joy Luck Club.”

The “yellowface” in “South Pacific” was incidental, and I assume the result of the small pool of Asian and Pacific Islander actors in the area. Maybe the production could have featured more accurate ethnic actors, but the casting didn’t bother me. Unlike “The Mikado,” the South Pacific setting of this play is an important part of the narrative.

After all, the main point of the musical is to criticize racism – a pretty progressive idea for 1949, when it originally opened. People probably remember songs such as “Some Enchanted Evening,” “Bali Ha’i” and “I’m Gonna Wash that Man Right Outta My Hair,” but the keynote of the book is “You’ve Got to Be Carefully Taught,” about the two main protagonists and their racial inhibitions: The nurse who falls in love with a Frenchman but is put off by the fact that he has two children by a native woman who died, and the G.I. who turns away from the Tongan woman he loves because of how others will think.

I enjoyed “South Pacific,” but couldn’t wait for “The Mikado” to end. We need to have some perspective on “classic” theater and judge them by contemporary standards if we’re going to perform them today. As far as I’m concerned, just because it was by Gilbert and Sullivan and is a “classic” work of theater from over a century ago doesn’t make “the Mikado” appropriate for today.

I’d compare “The Mikado” to blackface minstrelsy. Although blackface minstrelsy – a form of musical revue where white performers would smear burnt cork or shoe polish on their face and hands and play broadly stereotyped black characters – was one of the most popular forms of entertainment throughout much of the 1800s and well into the 20th century (Al Jolson famously sang “Mammy” in blackface in “The Jazz Singer,” a 1927 Hollywood film that’s significant as the first “talkie” to feature a synchronized dialogue soundtrack), it’s hard to imagine a theater troupe touring the country today doing a black minstrel routine…, unless it’s to make a point about the racism of blackface.

Likewise, I think it’s time to put “The Mikado” on the shelf – or, if someone wants to produce it, have enough guts and cultural sensitivity to set the musical on another planet. Then in a century, the inhabitants of that planet can complain about the stereotypes and force another evolution. The yellowface of the “The Mikado” is now as out of place as the blackface of “The Jazz Singer.”

Art and pop culture aren’t static, any more than social conventions are static. We shouldn’t continue to accept unacceptable depictions of people just because the play is a “classic” from long ago.

Here’s a promotional video of the New York Gilbert & Sullivan Players’ production of “The Mikado”:

And here’s Al Jolson singing “Mammy” — would someone reproduce this in a film or on a stage today?

And here’s the trailer for “The Mikado Project,” which seems to me to be the best way to deal with the play: