3. What’s the chain of evidence that sees these names when they’re submitted? Producers? Directors? Reporters? Anchors (she obviously didn’t catch it)?

I am not one of those journalists who denigrate broadcast news folks. I have lots of friends in TV and radio news, and many of them are first-rate journalists who take their profession and craft seriously. But this is just fodder for anyone who does think that TV news is where “talking heads” open their mouth without engaging their brains. Is getting the story first so freaking important now that all judgment and common sense go out the window just so you can read some names during a noon news show?

I’m waiting for some reaction from KTVU management. It better be good.

Uhh… here’s a Poynter blog post that says KTVU apologized for the error later in the same newscast but without noting the racial offensiveness of the content.

Earlier in the newscast we gave some names of pilots involved in the Asiana Airlines crash. These names were not accurate despite an NTSB official from Washington confirming them late this morning. We apologize for this error.

Several other media outlets contacted the NTSB and were told those names were not confirmed by KTVU. The official apology focuses solely on journalistic accuracy, but not the content of the “hoax,” as the station puts it. KTVU got punk’d but the deeper issue is, why are Asians always — and still — easy targets and fodder for racial hatred, stereotypes and tasteless “jokes?” Is it because we’re invisible (especially in news media) and historically we don’t complain or fight back?

I for one am mad as hell, and I’m not going to take this anymore.

Here’s the video of the apology during the noon broadcast:

Late today, the National Transportation Safety Board released an apology of its own: It turns out a summer intern did confirm KTVU’s list of pilots. “Earlier today, in response to an inquiry from a media outlet, a summer intern acted outside the scope of his authority when he erroneously confirmed the names of the flight crew on the aircraft,” the NTSB said.

This is yet another layer of incompetence to this saga. I trust the NTSB will deal with this errant intern. But it doesn’t absolve KTVU — even if someone at the NTSB confirmed the names, holy cow, wouldn’t you think there’s something not quite right, and check with someone else (like the AP article that ran a couple days ago)?

“Words cannot adequately express the outrage we, at the Asian American Journalists Association, feel over KTVU’s on-air blunder that made a mockery of the Asiana Airlines tragedy and offended so many loyal viewers of the San Francisco Bay Area station,” AAJA national president wrote in his original statement. By the evening, that outrage had softened somewhat, though AAJA still expressed itself well:

KTVU touted itself as the leading source for accurate coverage of last Saturday’s Asiana crash. That boast took a major hit Friday when the station fell victim to a hoax that made a mockery of the tragedy and offended many loyal viewers.

During its Friday noon newscast, the station reported that it had learned the names of the four pilots in the cockpit of the ill-fated flight, which crashed at San Francisco International Airport on July 6 and killed three passengers.

Those names were not only wrong, but so grossly offensive that it’s hard for us at the Asian American Journalists Association to fathom how those names made it on the broadcast. We choose not to repeat those names.

By the end of the day, KTVU had released an unprecedented second apology that acknowledged that there were several lapses of judgment, including not sounding out the names phonetically, and not asking for the title of the NTSB staffer who confirmed the names/ The station accepts full responsibility, and apologized again.

I accept their apology, and I’m sure they’ll work really hard to make sure this embarrassing mistake never ever happens again on any of their newscasts.

In case the video gets taken down, here’s a screen capture: 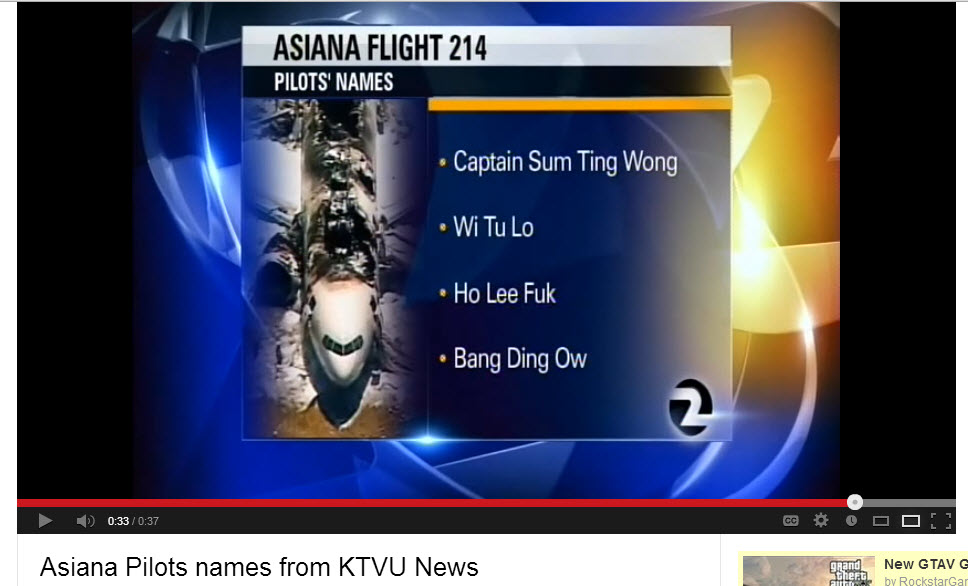