Inouye went on to an illustrious public career and passed away last December. Ironically, Sakato is a retired US Postal Service employee.

He’s a quiet, incredibly poised man. He’s obviously proud of his medal – he wears it when he makes public appearances in the Denver Asian community, and at Memorial Day and Veterans Day events. He was honored a couple of months ago at a Colorado Rockies baseball game, on the field during the 7th Inning Stretch. If you visit him in his north Denver suburban home, Sakato tells stories about his wartime experiences, but only if you prod him.

He was given his Medal of Honor, which was upgraded by President Bill Clinton from a Distinguished Service Cross, in 2000 at a White House ceremony where other Nisei soldiers received the same upgrade, 45 years after the end of the war.

Sakato was cited for his bravery during the famous battle to save the Texas “Lost Battalion” in the forests of France, who were surrounded by German forces. The 442nd was sent to rescue the Texans, and ultimately succeeded after several days. Over 200 Texas soldiers were saved, but the 442nd suffered 800 casualties to accomplish the mission. 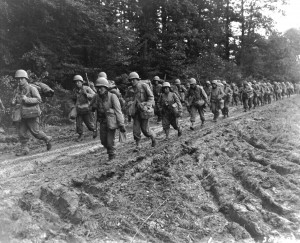 Joe Sakato (second from left, in the far row) is captured in a press photo during WWII. (Courtesy of Wikimedia Commons)

In telling the story of the battle, Sakato’s eyes tear up every time when he describes how his inexplicably buddy stood up in their foxhole and was fatally shot. Sakato cradled his friend’s head as he died, and then, enraged, charged the enemy position and killed every German. The Medal of Honor citation states, “During this entire action, he killed 12 and wounded two, personally captured four and assisted his platoon in taking 34 prisoners.“

I’m glad Joe Sakato is getting the accolades he so richly deserves for his heroism, even though it’s so many years since he charged that bunker. It’s nice to see his face on a sheet of stamps, and in the newspaper and on TV news. We see him at many Asian and Japanese community events, even though he’s now frail and is always accompanied by a friend or family member.

I’m glad he lives in Denver and serves as an inspiration for younger JAs and Asian Americans. And I’m proud for my dad, who may not have earned any medal for heroism, but served his country — my country – during a time of war.
I went through the supermarket looking for the scruffy guy who dogged me about the poppy, but didn’t see him again.

On my way out after shopping, I stuffed a $5 bill into the donation jar that was manned by the vet’s wife, and proudly told the couple, “My dad served in the Korean War with the U.S. Army, and he’s now buried at Fort Logan.” Fort Logan National Cemetery is in south Denver, and is the final resting place for almost 100,000 U.S. military, many who gave their lives for the country. Thanks, Dad, for your part in the country’s history.

And thanks, Joe, for your incredible heroism. Hope you had a terrific Veterans Day in Washington.

This post was originally written for use by the Pacific Citizen, the national newspaper of the JACL, for which I’m a columnist and on the Editorial Board.