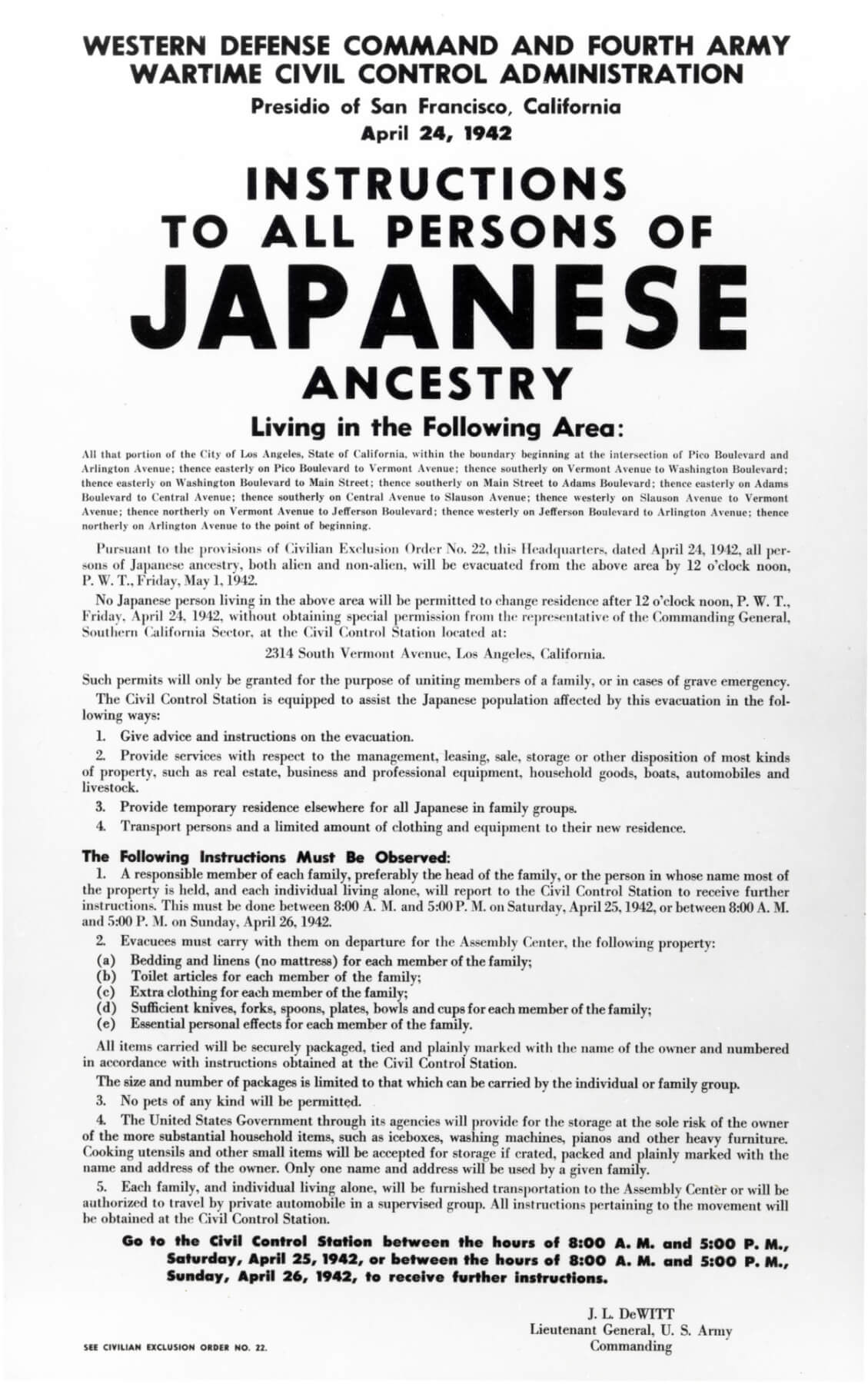 Would Muslims be imprisoned like the 120,000 people of Japanese descent who were incarcerated after President Franklin Roosevelt signed Executive Order 9066 on Feb. 19, 1942? That order allowed the U.S. Army to remove anyone of Japanese descent (half of the population was born in the U.S., so they were American citizens) from the West Coast and place them in prison camps surrounded by barbed wire and guard towers, for reasons of military security. Many of these families lost their homes and business and farms.

Thousands of JAs were brought to the concentration camp in Southeast Colorado, Granada Relocation Camp, better known as Amache, located outside the town of Granada, between Lamar and the Kansas border.

For decades, Japanese Americans have said “never forget,” and we mark that signing of EO 9066 every February 19 as a Day of Remembrance. In Denver, the Mile High chapter of the Japanese American Citizens’ League, the country’s oldest Asian American civil rights organization, will commemorate the 75th anniversary of EO 9066 next February 19 at History Colorado Museum. Full disclosure: I’m a member of the chapter’s board, and I’m also the Editorial Board Chair of JACL’s national newspaper, the Pacific Citizen.

The theme of next year’s DOR? The post-war resettlement of Japanese Americans in Colorado, and the continuing need to build bridges with the Muslim community.

Every year on the Saturday before Memorial Day weekend, there is a pilgrimage from Denver to Amache.

It’s a sobering sight, the crumbling foundations of barracks that once held 9,000 people at the camp’s peak. A water tank and a guard tower have been rebuilt; one of the tar-paper barracks serves as an equipment storage shed in a nearby Granada park. The site is desolate and mostly dirt, blowing dust and tumbleweeds. The one bit of green is where the Denver Optimists Club built a memorial to the men who volunteered and fought for the U.S. in Europe for the famous 442nd Regimental Combat Team… even though their families were in Amache while they fought for our freedom.

There were 10 camps in all, and Amache was the only one in Colorado. If you ever visit, you’ll understand why Japanese Americans feel a kinship to Muslims and Arab Americans. We know the sting of racism and how the government can legitimize such a mass act of hatred.

More than 40 years later, President Reagan signed the Civil Liberties Act of 1988, which paid a pittance of reparations to survivors and offered an apology that admitted that the incarceration was because of racial hysteria and economic reasons, not national security.

In the days after the 9/11 attacks, a similar wave of hysteria took hold. Conservative commentator Michelle Malkin even wrote a book, “In Defense of Internment: The Case for Racial Profiling in World War II and the War on Terror.” She thought that locking up people of Japanese ancestry during WWII was justified.

But within days of 9/11 the Japanese American community was the first to raise its collective voice in solidarity with Arab Americans, when hate crimes spiked and a Sikh man was murdered just because he wore a turban to show piousness for his South Asian religion. JAs said don’t let what happened to us happen again. In Denver, JAs and the larger Asian American and Pacific Islander community have purposefully built bridges with Muslims and Sikhs.

A registry is the start of a slippery slope, as Megyn Kelly pointed out in her interview with Carl Higbie. Ask the Jewish community. Ask Japanese Americans. Ask Muslims. Registry can lead easily into much, much worse.

This post was originally written for and an edited version posted on Denverite.com, and was also submitted to the Pacific Citizen newspaper.