Gil Asakawa's Nikkei View | Read who, how and why Japanese settled in Colorado
6206
post-template-default,single,single-post,postid-6206,single-format-standard,qode-quick-links-1.0,ajax_fade,page_not_loaded,,qode-title-hidden,qode-theme-ver-11.0,qode-theme-bridge,wpb-js-composer js-comp-ver-5.1.1,vc_responsive

22 Jan Read who, how and why Japanese settled in Colorado 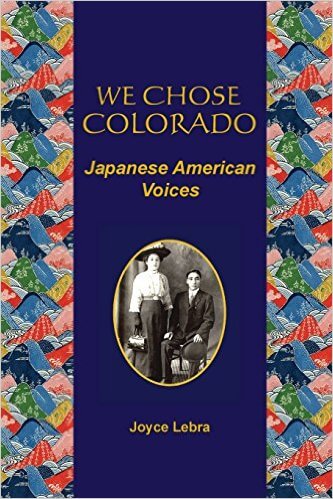 That’s why I enjoyed reading “We Chose Colorado,” a collection of oral histories from Japanese and Japanese Americans who live in Colorado — mostly in the Denver area. The book is by Joyce Lebra, Professor Emerita at the University of Colorado and a longtime expert on Japan and India. She’s written non-fiction books about the history of Japan, as well as novels set in Japan. Lebra was raised in Hawai’i and lived in Japan for 10 years. She received her doctorate in Japanese History from Harvard and Radcliffe, and lived through a big moment in Japanese history herself.

She was at the Self Defense Force’s (army’s) headquarters the day writer, actor and Nationalist leader Yukio Mishima and some followers took over the building and attempted to incite a coup d’état on Nov. 25, 1970. After giving a speech from a balcony with Lebra among the evacuated watching from below Mishima committed ritual suicide. Lebra’s story witnessing the incident ran in the New York Times three days later.

Lebra chose eventually to move to Colorado, and taught for many years at the University of Colorado in Boulder. She began working on on “We Chose Colorado” several years ago, and I was introduced to her when she was looking for Japanese Americans to interview. After talking to her, she chose to write about my anecdotes about my mother in her book. I can’t say all the facts are correct in the section about my mother (I don’t have two older brothers, for instance), but these are small nits I pick. Overall, reading her book has added to my understanding of and appreciation for many people in the local JA community.

The text begins with a historical background about Japanese immigration to the US, and then to Colorado. The meat of the book reflects its subtitle: “Japanese American Voices.”

Lebra interviewed a number of people across northern Colorado’s farms and ranch towns to the Denver metro area’s much more concentrated Japanese community. She focuses at the start of her oral histories on the Watada family, whose Issei, or first-generation forebear, Masajiro Nakagawa Watada, made his way from Fukui prefecture to work eventually in Denver. The Watadas are now spread across northern Colorado and down to Denver. Our insurance agent is a Watada. A young Watada runs the Greeley Stampede rodeo and stock show.

It’s a pleasure to read many family members’ recollections and scenes from their lives, sometimes everyday fragment, sometimes more dramatic. Lebra finds other JAs and tells many such stories of coming to Colorado and living out rich, full lives here. I read the stories of many people I’ve known for years through associations with various organizations and events, and was surprised to learn their backgrounds — one worked as a rocket scientist; another is famous the world over for innovations in meat packaging. Many have advanced degrees and levels of education that I will never attain.

The last part of the book includes interviews with more recent immigrants — shin-Issei, or the “new Issei,” including businessmen and my mom.

After reading “We Chose Colorado,” I have come away with a renewed respect for the people here in my local community, and what they’ve accomplished in their lives and for this community. For that, Joyce Lebra deserves our thanks.

Now, let’s hope for a second book in the series that can include many more families and individuals — there are still so many stories worth telling!

You can order “We Chose Colorado” from Amazon.com (also in a Kindle edition). On Monday, January 23 (yes, tomorrow), Joyce Lebra will be interviewed at the Denver Public Library’s Central Library by David Wagner, a business consultant and former Coloradan now living in Tokyo, about her book. It should be a lively and interesting conversation. The event, sponsored by the Japan America Society of Colorado, is scheduled from 6-7:30 pm. I’m looking forward to it — I hope if you live in the Denver area, you can make it too. Click here to register.