11 May When family caregiving isn’t enough for your parent 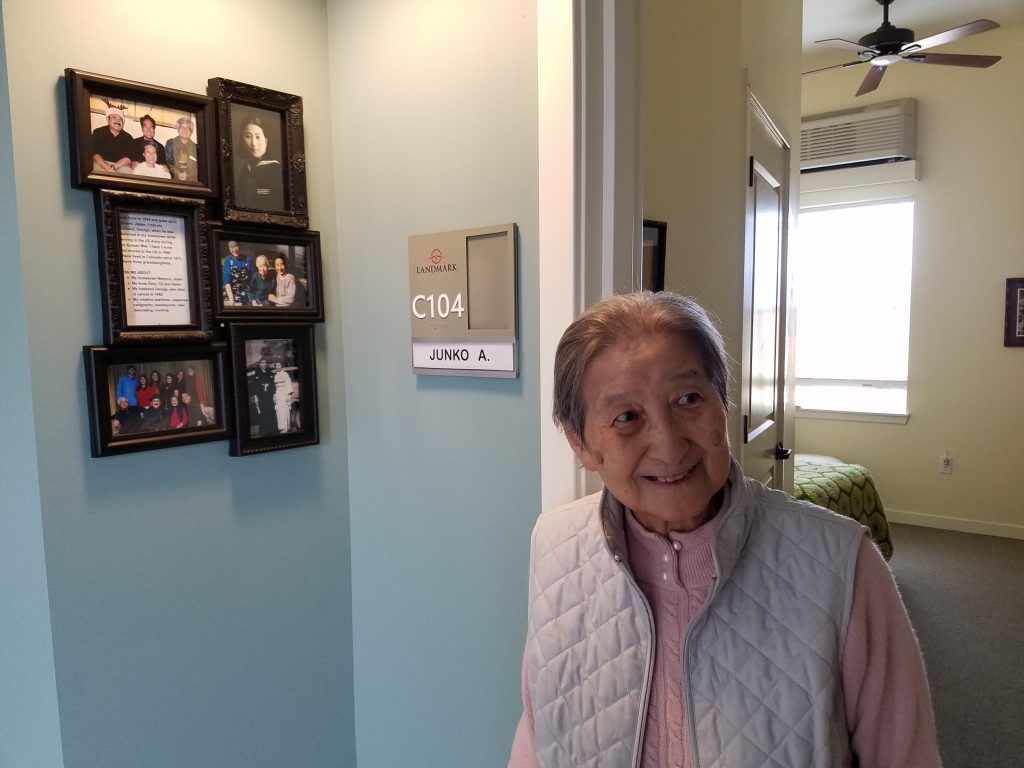 My brother Glenn and I moved my mom from her house in Lafayette, Colorado, last month to live in a memory care facility nearby. She’s had dementia for a long time, and it’s gotten noticeably worse for the past couple of years. I’m still sorting through how it felt to take her out of her house, and how it feels now.

Junko Asakawa was born and raised in Nemuro, a small fishing town in the northern Japanese island of Hokkaido. She grew up in the pre-war years, and was even crowned “Miss Nemuro” when she was a teenager.

My mom went to work after the war for the Americans who occupied Japan, because she could speak a little English. Nemuro had a contingent of GIs, and she met my dad, a Nisei born in Hawaii who was stationed in Nemuro during the Korean War. 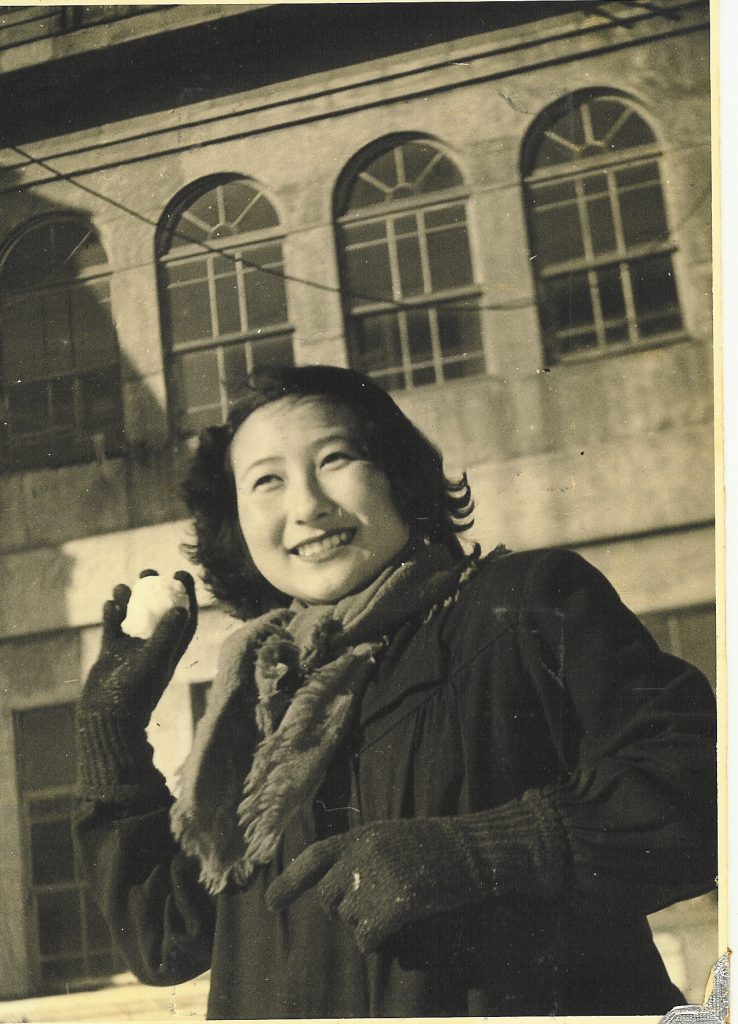 By the mid-1950s she moved with my dad to Tokyo where my two brothers and I were born. She was a typically strict “tiger mom” of the day, expecting us to clean our rooms and study hard. She was like many foreign-national military wives, speaking in halting English to chat with neighbors’ wives or go shopping at the PX (Pacific Exchange, the wonderfully inexpensive military shops where GIs bought and brought home emerging Japanese tech in the form of cameras and hi-fi stereos).

When my dad took a job with the Army Corps of Engineers outside Washington DC, we moved to northern Virginia, and then to Colorado when I was in high school.

My mom always cooked Japanese food even when she made American-style dinners. I have vivid memories of eating steak, or hamburgers, or spaghetti – while she had salmon, miso soup and white rice. The rest of us had white rice with every meal, even with spaghetti and with turkey or roast beef served with mashed potatoes. There’s nothing more delicious than white rice smothered with gravy!

She also baked and decorated cakes for years for extra money, and I was proud to help her by making templates for her of cartoon characters like Snoopy or Charlie Brown when customers requested them. And, while in Virginia she began making mochi manju, the Japanese sweet bean-paste-filled sticky rice pastries, for sale in a DC Japanese grocery.

After we moved to Denver, she continued making cakes and selling manju through Pacific Mercantile, the Japanese supermarket in Sakura Square. I found two small albums of faded photographs of her cakes, a catalog of her creative output, that I’ll treasure.

She used to make Japanese dolls but quit when manufacturers started selling only body-forms made of plastic instead of the wood-shaving-stuffed fabric bodies. She made the “shoji” screens in our house in Denver. She began studying Japanese calligraphy, and ended up teaching classes for appreciative students in our house. She eventually got into Bunka Shishu, Japanese embroidery, and framed a lot of her finished pieces.

My dad died of cancer 26 years ago. My mom lived in our big suburban house until almost a decade ago, when my younger brother Glenn suggested she should love across the street from he and his wife and their daughters’ house in Lafayette, a northern suburb east of Boulder. After her move, it seemed like she became a smaller person, not just in stature but in presence, and lonelier. Her Japanese friends were farther away.

She became, like a lot of older people, isolated. Mostly, in the last few years, she’s spent her time watching TV Japan, a satellite television feed of Japanese programming that includes news, kids’ shows, game shows, dramas, music and variety shows all on one channel, all day long.

We took away her car keys about five years ago when state police found her at a highway exit in Wyoming, a two-hour drive away. She thought she was going to Walmart five minutes away.

Her fading memory meant she was cooking less and eating more instant or frozen foods. My wife Erin and I got in the habit of buying her half-a-dozen Unagi-Don, or grilled eel bowls, from a Japanese place near us and having her freeze them. She’d eat half for one meal and save the rest for the next night.

Because Glenn and his wife Michelle lived across the street, they became my mom’s primary caregivers, taking care of the house and yard, and making sure she was all right. They’d take her grocery shopping (in the end they just bought the groceries she needed) or to the hair salon.

But we all knew that my mom’s dementia would make it harder and harder to care for her. By this January, Glenn and Michelle were going across the street every morning, noon and night to feed her because she’d stopped cooking for herself.

Erin and I accompanied her to Japan a couple of times because she wasn’t capable of traveling there herself. The last trip a year and a half ago, we told her it was so she could say goodbye to family and friends, because it would be her last time traveling to Japan. Her dementia had gotten worse and she had trouble remembering peoples’ names, even family members.

It’s hard to face the reality. Even though you think you can keep caring for a loved one in their home, or in your home, there will come a time when the burden of caregiving can feel like a crushing weight. For Asians especially, there’s so much cultural value placed on respect for elders and caring for elders that Asians tend to have among the highest numbers of multi-general households.

We finally realized it was time to let professionals care for mom fulltime, 24/7. Glenn did an excellent job of contacting nearby senior centers and memory care facilities (specially created for people with dementia and Alzheimer’s) and we chose one that’s just a few minutes away from his house. Glenn and Michelle brought some things from her home to make her room look familiar, and we pay for TV Japan on her cable box. 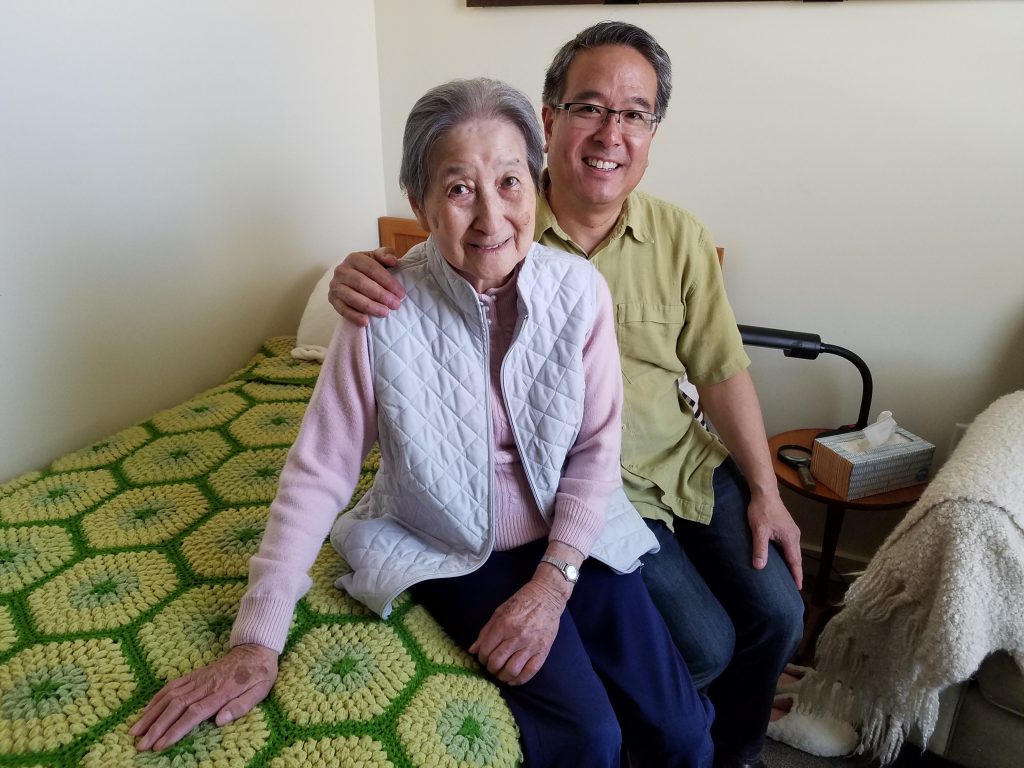 Mom with my brother Glenn in her room at Landmark Memory Care.

To my surprise, in the weeks since we moved her, my mom seems to have adapted to her new home, even though she gets confused sometimes when we visit and asks when we’ll take her home. A few days ago, much to my surprise when I visited with my niece, my mom was playing an alphabet game with four other residents sitting around her at the table, watching and helping. The staff at the center says my mom is very social (shock to all of us) and sits in the lobby great room area and socializes with other residents most of the time (another shock) or watches the cable news channels or old American TV show networks (shock), takes care of everybody else and spends very little time in her room watching Japanese TV (shock, shock, shock).

But it’s hard to shake the feeling of guilt that I’m not doing enough for my mom. Many of you will become caregivers, or your family will need to care for you. Just know that there are a lot of emotions that get stirred up in making the decision to place a loved one in an institution. And, there are ripple effects that continue to affect you.

We’ve been cleaning out my mom’s house so we can rent it out, and I turned to Glenn a few days ago while we were dragging out old furniture and some of my mom’s lifetime of, well, just stuff to a dumpster in the driveway, and I had to say, “This is so weird, it’s as if mom already died and we’re cleaning out her estate.”

Sadly, that is what it’s like to clean out anyone’s property. But the optimist in me knows that we’re doing the right thing and our mom will be well-cared for. And she’s delighted when we bring her a Japanese snack like the mochi manju she used to make, or osembe crackers.

We’re looking forward to taking her to Japanese restaurants when she’s mentally settled in her new home. That should bring her some very nice memories.

An edited version of this post ran in the Pacific Citizen, JACL‘s national newspaper. I’m the editorial board chair of the P.C.