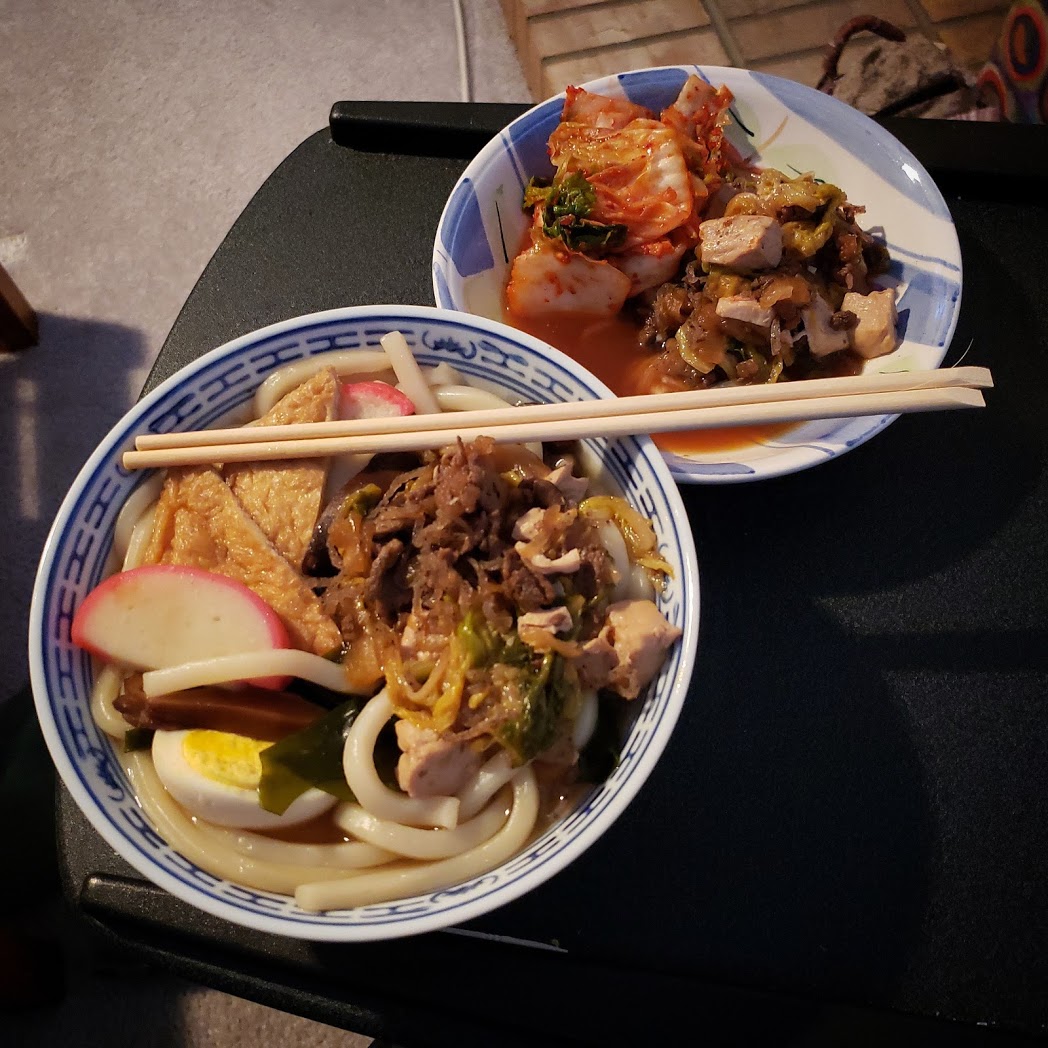 23 May Food for thought – and sheltering at home

Anyone who knows me knows that I love to eat. I’m a foodie. I love restaurants (I’m opinionated about them, too). And, I love to cook. I post photos of my food on Instagram, Twitter and Facebook, and even use the hashtags “#twEATs” and “#foodporn.”

I like all food from around the globe, from burgers and pizza to Middle Eastern, Italian, Swedish (thank you, Ikea!), Ethiopian, Mexican, Argentinian, South Asian, Vietnamese, Korean, Filipino and all flavors of Chinese including American Chinese. I’ve even eaten candied ants and cooked crickets. My gastronomic motto is “if someone somewhere on Earth eats something, I’m willing to try it… at least once.”

But my favorite food, not surprisingly to anyone who knows me, is Japanese cuisine, or Nihon Shoku. In restaurants or cooked up at home, I love Japanese food. I grew up with it, after all. And I’m proud of knowing about Japanese eats, how it’s done right, what people do wrong, and the cultural nuances and the history of the dishes I crave.

Last year I became obsessed with Japanese knives, and got both a super-sharp Santoku all-purpose kitchen knife and a heavy single-bevel Deba knife for filleting fish and cutting up meat. I also sharpened and fell in love all over again with two old knives from my mom, a Gyuto, a Japanese take on a Western chef’s knife, and a useful smaller Petty knife. I swear, having good sharp knives makes cooking a lot more fun.

As the coronavirus changed our world, I’ve found myself enjoying cooking – both Japanese and non-Japanese dishes even more than I always have. My wife Erin is a great cook too, and specializes in the Japanese food she grew up eating, which includes dishes I didn’t have when I was young, because of regional differences in where our families come from in Japan.

In the two months we’ve been mostly homebound, we’ve also served up crazy international mashups: some we cooked, some we bought, some we picked up to go, like one night when we had leftover homemade spaghetti, salad, pork tamale, Japanese-style spinach with shoyu and katsuobushi bonito flakes (one of the few vegetables I remember my mom giving us growing up in Japan), and Spam and eggs with lotsa onion and shoyu.

One recent night after dinner, when my father-in-law dropped off some salmon and mackerel that he generously grilled for us, I made a post-prandial side dish of ochazuke: salmon and furikake sprinkled over rice with green tea poured over it. That’s a flavor I remember vividly from when I was a kid. I even reached further back into my Japanese side to have smelly snotty natto (fermented soy beans) drizzled with shoyu and mixed into hot rice. Then I doubled down another day for breakfast, and had raw egg and shoyu mixed together and poured over hot white rice. Yum!

We’ve made okonomiyaki, the savory Japanese pancake (sort of – some describe it as a pizza) made with flour and egg and various vegetables like bean sprouts and shredded cabbage with pork belly (bacon) on top.

When I wasn’t playing chef, I served as sous chef for Erin, and the other day helped cut up a pork shoulder roast into small strips that she added to miso, ginger and dashi soup and tofu to make butadofu.

We’ve had delicious steak shiskebab grilled by my father-in-law Rex, accompanied by our specialty, Japanese Potato Salad, which we made enough of to deliver to three family households.

We’ve eaten Curry that was given to us by a friend some time ago, which we thawed and poured over brown rice.

From Costco, our go-to store, we got Miso Cod that was pretty good from the frozen section (Limit 1 per member for many weeks). We served it with a brown rice spaghetti dish we made from a Chrissy Teigen recipe, “Lemony Arugula Cacio e Pepe.”

And, we’ve bought a ton of kimchi and jhap chae Korean pan-fried glass noodles at Hmart, and have kimchi with almost every meal, because it’s good for you. Just ask any Korean. We also started making an indispensable accompaniment, Toum, which is a Lebanese garlic sauce that’s the consistency of mayonnaise. It’s just garlic, salt, lemon juice and oil blended in a food processor… and it’s very garlicky!

It’s been a wonderful adventure. I bet a lot of readers have had some great foodie adventures at home, too. I’d love to hear about them in your comments below.

Or maybe you’re supporting your favorite local restaurants, Japanese or not, by ordering food for pick up or delivery. Hint: Order and pick it up – the food delivery services that many of us have gotten comfortable using charge exorbitant fees to the restaurants so they actually make less money if you have GrubHub or UberEats deliver dinner.

When we make a big batch of sumthin’ sumthin’, I’m happy to box up the Tupperware and deliver them to family in my Subaru, calling myself “GuberEats.” Get it?

If you want inspiration, you can find lots of amazing Japanese food videos (in English and Japanese, and the Japanese videos often have good English closed captions) on YouTube. My go-to YouTuber for Nihon-shoku is Namiko Chen, or Nami, and her channel “Just One Cookbook.” Her videos are very instructional and the blog posts and articles on her website are educational, putting the food into cultural context. Here’s one of her recent videos, on how to make Curry Udon:

Nami also posts on Instagram and Facebook and her website is a terrific resource. She was born in Yokohama but now lives in the San Francisco area. With her husband’s production help filming and photographing her cooking, Nami is an impressive culinary ambassador for Japan. I’ll be interviewing her at length soon, so stay tuned.

I’m enough of a foodie, and enough of a fanatic for Japanese food in particular, that this year I’m writing a book, “Tabemasho! Let’s Eat!”) about the history of Japanese food in America. Stone Bridge Press, the publisher of my previous book, “Being Japanese American,” will release it in 2021. I’ll cover early Japanese restaurants to Benihana, the chain that helped popularize Japanese food (at least Japanese-style steakhouses) as mainstream American fare. I’ll write how other kids used to think it was gross that I ate raw fish and this stuff called sushi, but how spoiled kids now think it’s perfectly normal and it’s available at supermarkets (it might be meh sushi, but it’s still sushi). I’ll write about the Chinese roots of ramen and how it became a staple of American college kids once a genius in Japan first invented instant ramen, then later invented Cup-Noodles.

And let’s not forget the contributions that Japanese Americans have made to Japanese cuisine… Erin grew up with cookbooks from Buddhist Temples (we have one from the 1960s from Gardena, a suburb of LA!), and various JACL chapters have published cookbooks over the years. The St. Louis JACL was kind enough to send me theirs, “Nisei Kitchen,” which was originally published in 1975 and is still sold today.

I hope you’re still staying at home unless you need to venture out for food or medicine. I hope you’re all wearing masks outside, observing social distancing and washing your hands obsessively. Stay safe, everyone, and we’ll get through this together, maybe fatter but healthy.

NOTE: A shorter version of this post was published in The Pacific Citizen newspaper, where I published a monthly column called Nikkei Voice.