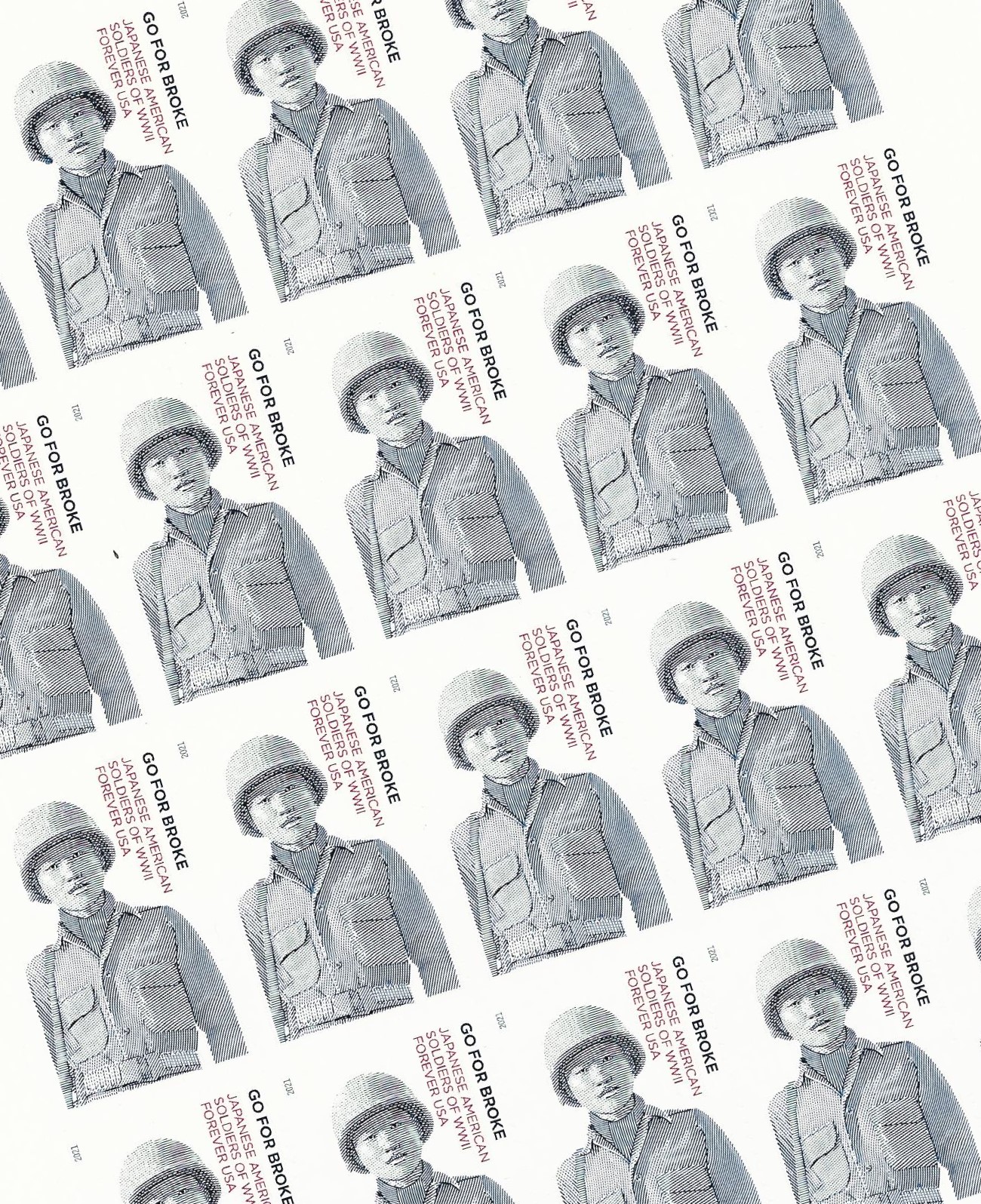 It took 15 years, but the US Postal Service (USPS) this past June released a Forever stamp that memorializes the “Go For Broke” 100th Battalion and 442nd Regimental Combat Team, the Nisei soldiers of World War II who served in Europe and became the most highly decorated unit in the history of the US military for their size and length of service.

The Pacific Citizen newspaper reported last year on the approval for the stamp, which was the result of a decade-and-a-half of work by a volunteer trio of women who founded the Stamp Our Story Campaign in 2005, as well as JACL members across the country and organizations such as the Japanese American Veterans Association (JAVA).

The stamp is a portrait etched in a printmaking process called intaglio, of U.S. Army Private First Class Shiroku “Whitey” Yamamoto of Ninole, Hawaii. Yamamoto is the avatar for all Japanese American soldiers who fought for their country, and though the USPS didn’t overtly include the members of the Military Intelligence Service or MIS in their tribute, JAs understand the respect is shared with the soldiers who were in the Pacific during the war and afterwards, working in General Douglas MacArthur’s Occupation Forces in Japan.

Denver, where I live, has claimed its share of 100th/442nd veterans – 11 local men were awarded the Congressional Gold Medal in 2011 and were honored at a White House ceremony hosted by President Obama. Among them, George “Joe” Sakato had already received the Distinguished Service Cross in 1944 for heroism in battle, and then his medal was upgraded in 2000 after the awards of Nisei veterans was reviewed, to the Medal of Honor, the nation’s highest military honor. His medal was placed around his neck by then-President Bill Clinton.

Joe earned his medals because of the valor he showed as a soldier under the most terrible of circumstances.

Imagine being a young American whose family is uprooted and sent to a concentration camp just because of your ethnic heritage. Then when your country needs help, you volunteer and leave your family behind barbed wire while you go across the world to fight for the country that locked you up. Joe Sakato’s family moved from California to Arizona to avoid incarceration, but like the men who enlisted from prison camps, Sakato joined the Army in 1944, along with almost 18,000 other Japanese Americans who fought in Europe, and 6,000 who were in the MIS. The 100th/442nd suffered so many casualties they became known as the “Purple Heart Battalion.”

One of the many battles that contributed to this nickname was the rescue of the Texas Lost Battalion, which had been trapped by Nazis in the Vosge Mountains of eastern France in October, 1944. The JA troops were sent to rescue the surrounded Texans, and suffered 800 casualties to save 211 men. Among the casualties was Joe Sakato’s best friend Saburo Tanamachi. 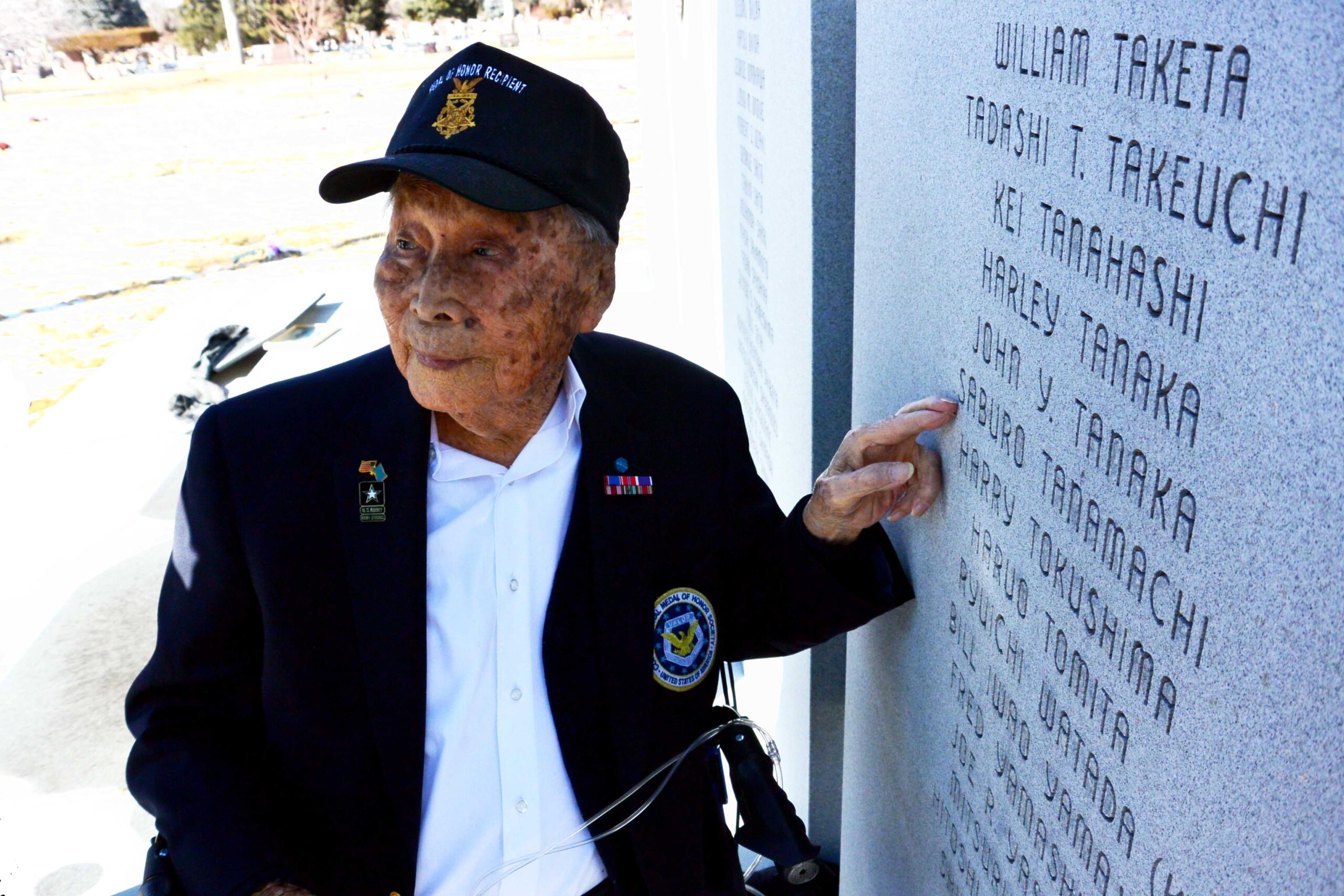 Sakato and his platoon were pinned down by a German machine gun nest on the forested mountain and when his friend stood up to try and figure out the enemy’s location he was shot and died in Joe’s arms. This enraged Sakato to the point that he left his foxhole and advanced uphill, killing German soldiers and eliminating the machine gun nest. Whenever he told the story of his friend’s death, Sakato’s eyes welled up with tears as he remembered crying out why Tanamachi had stood up.

Joe was a regular presence at the annual Memorial Day service at Denver’s Fairmount Cemetery, where a Nisei Veterans’ Memorial had been built. He would point out the name of his late best friend, Saburo Tanamachi etched in the memorial, if anyone asked about his wartime experience. 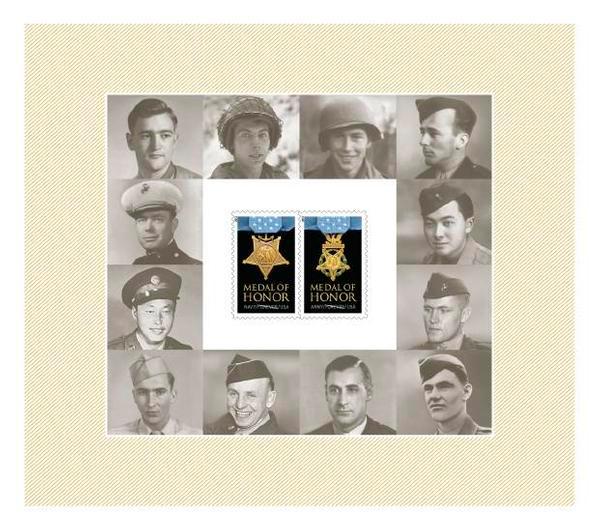 Joe died in 2016, but in 2013 his portrait was included on the sheet surrounding a USPS stamp honoring Medal of Honor recipients. Ironically, Joe worked for the Post Office for decades until his retirement. After the war, he couldn’t find a job – he said there was too much hatred towards Japanese (and, by association, Japanese Americans) even though he wore his military uniform to job interviews. But he was hired at the Post Office. In 2019, the USPS renamed the post office branch where he had worked after him.

Now Joe Sakato’s legacy has come full circle, thanks to the 15-year Stamp Our Story Campaign’s efforts. The contribution of Sakato and so many other JA soldiers has officially been recognized with a postage stamp. It’s a small but significant and powerful symbol. I bought sheets of the stamp not to use but to keep.

But if you ever see a Go For Boke stamp on a letter, or if you stick one on an envelope, please salute the history that went into it.

NOTE: This post was originally written for the Pacific Citizen newspaper of the JACL.