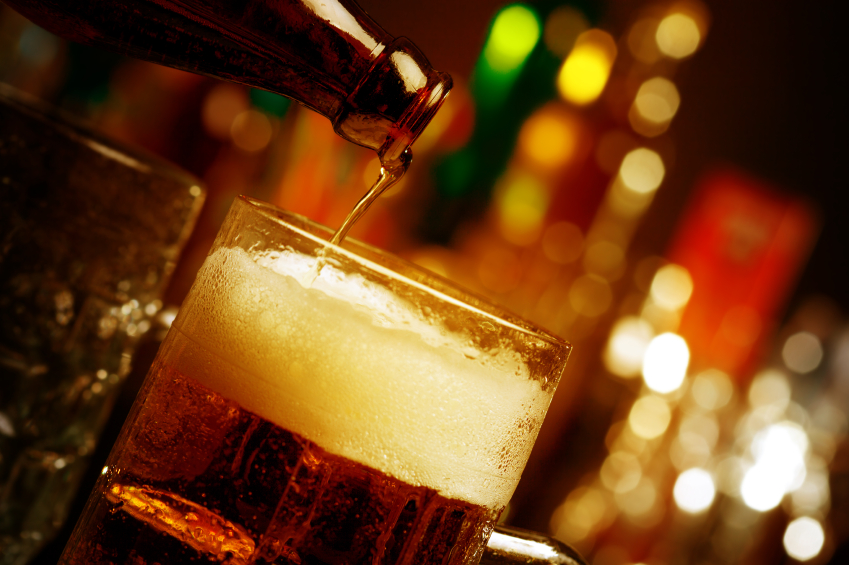 I don’t drink, but it’s not because of moral objections or religion or prudishness. Like many Asians, I’m allergic to alcohol.

Specifically, I get the familiar “Asian Flush” after just a few sips of even beer. I drank when I was younger, but I felt self-conscious about my face turning red, my eyes glowing in the dark and my body getting splotchy like I rolled around in poison ivy.

It’s not fair: My dad used to drink like a fish and he didn’t get the Asian flush. My younger brother Glenn is blessed with the same ability to drink without the outward sunburned display; my older brother Gary turns red but it’s never stopped him from drinking.

As a high school student (yes, it’s true, I may have done some under-aged drinking… I blame my jock friends), I could never hide the fact that I may have sipped a beer or two. Even if I came home at 1 in the morning, my mom would be inside the front door or at the top of the steps. “You be drinky? she’d ask. “Uh, no mom, I don’t drink. I was just driving around the mountains with Bubba and John.” “Heh? You sure? You look like you be drinky…”

Same thing during college. I remember the day I turned 18 in my freshman year at Pratt Institute, I walked the few blocks to John’s Liquor and got myself a big ol’ bottle of Bacardi and a litre of Coke. I felt like a grownup… until I glanced in the mirror and looked like Captain America’s nemesis, The Red Skull.

I generally avoided drinking at parties, preferring to imbibe in the privacy of my dorm room. Even after I graduated, the very few times I drank (like when Peach Schnapps was all the rage, and later Jaegermeister), it was alone, in my apartment.

After college, when I volunteered as a control participant for a study on alcoholism within the Native American population, I learned I’m very allergic to alcohol. I’ve pretty much stopped drinking alcohol ever since, and that was almost 30 years ago.

There are a lot of advantages to not drinking. I save a lot of money compared to friends who go out drinking at the drop of a hat, and I’ve avoided the health issues associated with heavy drinking.

On New Year’s, since Erin also doesn’t drink, who hoist a bottle of sparkling grape juice. But every once in a while, I get the yearning to be more sociable — drinking is so social — and have a beer, or a mixed drink, with friends. Some of the new mixed drinks like the fancy martinis look so yummy, too (yeah, I always had a soft spot in college for “girly” drinks like Tequila Sunrises, Boone’s Farm and Sangria). 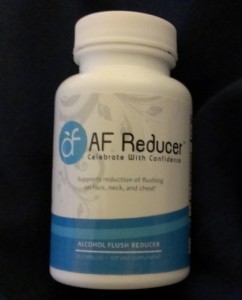 Now, thanks to a new product, I can have a drink or two whenever I want in a social setting. I was recently contacted by Pat Moynihan, a business school senior at the University of Colorado, who is Caucasian but whose family has always exhibited the flush — which he calls Alcohol Flush.

He came up with a capsule of vitamins and minerals that he calls AF Reducer, and launched a Denver-based company in November to sell it online with the tagline, “Celebrate with Confidence.” One bottle costs $29 (two for $50) and each bottle has enough capsules — you take two or three half an hour before any alcohol intake — to last through 15 nights of drinking.

I tested the product after he sent a sample bottle, at a part over the weekend.I asked the partiers (it was a mostly Asian gathering) for volunteers. One woman joined me in splitting a Sam Adams; a couple of others took some pills to test in the privacy of their own homes. We took pills — she had two, I had three — and half an hour later, we drank our beer.

It tasted weird after all these years. I’m really not a big fan of the taste of beer — hence my preference for sweet frou-frou drinks. I can say with certainty that back in the day, I would have turned a bright red and my eyes would have glowed in the dark within minutes of the first couple of sips. Seriously. But not this time. I swallowed the Sam Adams and felt just fine — not even any heat from my face.

Here’s how it works from the AF Reducer website:

Alcohol Flush (Also known as “Asian Glow”, Oriental Flushing Syndrome, or Asian Flush) is a common cosmetic skin condition that affects 65% of East Asians and 38% of Caucasians. Most people who are affected by Alcohol Flush might not realize that it is a condition that can be treated medically and is due to a deficiency in Aldehyde Dehydrogenase (ADH), an enzyme that breaks down alcohol. Alcohol Flush is often quit noticeable and can range from a minor red skin flush to fully red and irritating flush on the face, neck, and chest. This irritating red glow is unsightly and can be quite embarrassing.

Alcohol when consumed, is rapidly absorbed by the body and the maximum concentration in the blood occurs within 30-60 minutes. From the blood, alcohol is extracted into the liver (90%), or is eliminated (10%) through the kidneys, lungs, or sweat. The liver contains an enzyme called acetaldehyde dehydrogenase (ALDH2), which is responsible for breaking down the alcohol into a normal metabolite, which can then be broken down in carbon dioxide (CO2) and water (H2O).

However, a genetically inherited deficiency in ALDH2 causes the body to not metabolize alcohol as rapidly as normal. This build up causes the acidity level in the body to rise which then makes one’s blood vessels dilate. This is how Alcohol Flush occurs. The unique natural makeup of AF Reducer helps to reduce the acidity level within the body process, thus reducing the flushing.

The side effect of having this deficiency and putting up with Asian Flush, by the way, is that our bodies process alcohol very quickly. That’s probably why, back in my drinking days, even if I got falling down drunk in school, I never, ever had a hangover in the morning. It’s also why some scientists ponder that Asians as a demographic allegedly resist alcoholism. It’s possible that the flush began 10,000 years ago — about the time rice was first cultivated in China (and fermented into alcohol). And some Caucasians developed the flush as rice cultivation traveled west into Europe.

So calling the symptom “Asian Flush” suits its origins. And Asians by far suffer form it more than other races. I found out yesterday at a meeting of Asian American journalists (a couple of whom took some of the AF Reducer to — ahem — test it for themselves) that the younger generation of Asians take Pepsid AC as a solution to the flush, but that it’s not always effective.

I’ve seen some other recent products online that claim to address the flush. But AF Reducer does the job for me. In the rare case that I anticipate being someplace where I’ll want to hoist a toast and want something stronger than water or juice in my glass, I’ll keep it handy.

You can read more about AF Reducer at http://afreducer.com.

UPDATE: My friend Tom tried AF Reducer at home and had a glass of wine. He says his Asian Flush was noticeably reduced, but not completely eliminated (AF Reducer says the dosage might need to be adjusted, and that not everyone will be affected the same by the pills). Tom added though that his daughter, who had about half a glass of wine diluted with some water, didn’t feel the flush at all. Split decision.

8 Responses to AF Reducer passes the taste test: I drank beer and didn’t get Asian Flush