When Erin and I traveled to Hawai'i last September, we spent several days at the home of my cousin Laura McHugh and her husband John, in Mililani, northwest of Honolulu. I didn't write abut it at the time, but one of the coolest things about our stay was that John is a music fan who shares a lot of the same interests as me and my rock-critic friends. I found a stash of CDs I promptly had to put on my iPod, including a bunch of John Hiatt, and some gems I hadn't even thought of in decades, like Green on Red, a late '80s alt-rock group I had seen at the Mercury Cafe that I had once compared to Neil Young and Crazy Horse. Anyway, it's taken me months to pay John back, but I've burned him some of my favorite music. These CDs contain sounds that sustain me, surprises me and makes me smile when it comes up in my iPod, which is always set to shuffle through all my music. 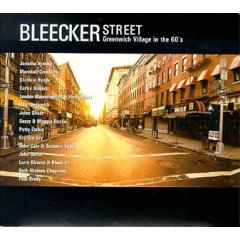 Various Artists Bleecker Street: Greenwich Village In The 60's To a fan of folk and folk-rock music like me, this is a rare, and little-known, treasure. It came out a few years ago and I came across it at a Borders bookstore. Itâ€™s a compilation of â€˜60s urban folk-era remade by contemporary singer-songwriters, and though some of the covers are reverential and dry, some are really fresh takes on these songs, all of which Iâ€™ve known for decades. My favorites include Jonatha Brookesâ€™ crystalline, haunting take of Paul Simonâ€™s haunting â€œBleecker Street,â€ the tribute to the first folk eraâ€™s ground zero in Greenwich Village, from Simon and Garfunkelâ€™s debut album. Another favorite is Loudon Wainwright III and Iris DeMentâ€™s rollicking â€œPack Up Your Sorrows,â€ which led me back to Richard and Mimi Farinaâ€™s greatest hits album, where the original still glows, and Cry Cry Cryâ€™s beautiful version of Tom Paxtonâ€™s deeply moving â€œLast Thing on My Mind.â€ Droll baritone folkie John Gorka tackles Eric Andersenâ€™s â€œThirsty Boots,â€ John Cale and Suzanne Vega (!) wrap themselves around Leonard Cohenâ€™s â€So Log Marianneâ€ and Larry Kirwan of the NYC Irish rockers Black 47 revs up Phil Ochâ€™s still-relevant anti-war rant, â€œI Ainâ€™t Marchinâ€™ Anymore.â€ Yeah, I like everything on the disc, and Iâ€™ve turned many souls onto this disc.
Read More