Turnabout is fair play, right? It’s karma. In Japanese, it’s a bachi coming back — basically, you reap what you sow. McDonald’s in Japan has started using a laughable nerd who doesn’t have a clue in its ads, mangling Japanese, looking all uptight in glasses and ill-fitting khakis. You’d think it’s how an Asian would be cast in American commercials… and in fact, Asians have been portrayed this way, many times.

Except this is a goofy white guy in Japan.

The women over at Disgrasian posted about the campaign (I love that they’re part of the Huffington Post crew, don’t you?), and gave the right slant on it (sorry, couldn’t resist) by including this graphic of Asians portrayed in US mainstream media: 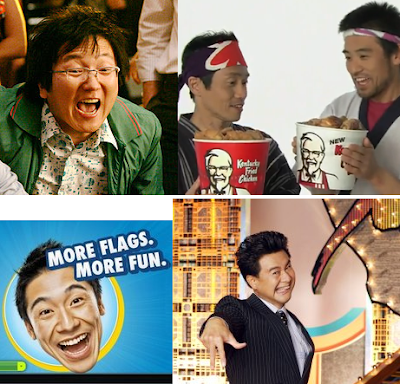 It’s easy to chuckle over this, but this kind of stereotyping and treatment of foreigners in Japan is no laughing matter.

There’s a lot of racism in Japan — I guess it would seem like reverse racism to us here in the US of A — including lots of instances of foreigners banned from businesses a la the segregation years here.

There’s a movement in Japan to fight such institutionalized racism, and one of its leaders is a European American professor in Sapporo, David Aldwinkle, who married a Japanese woman and changed his name to Arudou Debito (the Japanized pronunciation of his English name). I’ve followed his battles for years on his website and email newsletters. He’s taken on local governments as well as businesses, and he’s posted the text of a letter sent by a group he works with, to the McDonald’s corporation, over the new ad campaign.

What’s odd about this ad campaign is that the Japanese in the past have sort of worshiped Westerners as spokespeople for their ad campaigns. I remember seeing Arnold Schwarzenegger dressed as a samurai for a ramen company, and Hollywood stars such as Mickey Rourke (OK, this was a while ago, before he crashed and came back) have been plastered all over Japan to peddle cigarettes — something unimaginable here.

Maybe the use of a nerd as the image of an American reflects Japanese culture coming to grips with its obsession with all things American.

Or maybe it’s just a reflection of the country’s innate racism showing a little more publicly than it has in the past. It’ll be interesting to see if McDonald’s backs down.