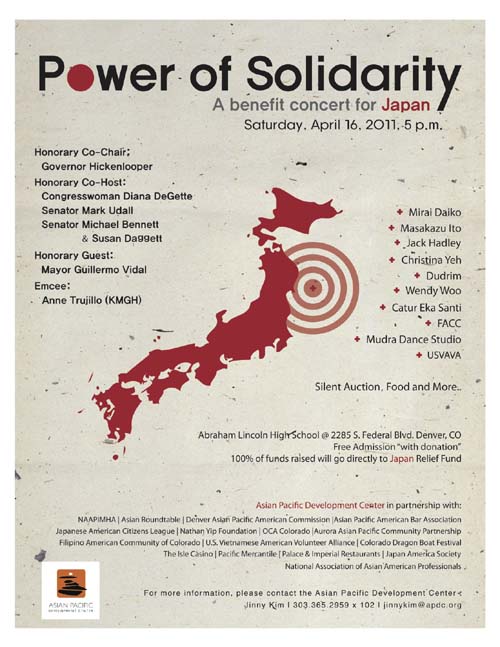 One of the heartwarming positive ripple effects of the tragic disaster in Japan has been the worldwide outpouring of support for the country and the earthquake and tsunami’s victims. That’s true locally in Colorado, where a handful of benefit events have already been held, and not just by Japanese or Japanese Americans.

A couple of weeks ago Colorado’s taiko groups got together to perform an evening of Japanese drumming to raise money for earthquake relief. On Saturday April 16, the Asian Pacific Development Center and 16 — count ’em, 16 — other local Asian community organizations who’ve signed on as partners are hosting “The Power of Solidarity,” a pan-Asian event of epic proportions. (Click the flier for full size.)

Admission’s free but donations and all proceeds from merchandise sales and a silent auction will be distributed 100% to three different portals, to maximize the benefits of the funds reaching their intended destination. The money will be split equally between Direct Relief International (for medical aid, the preferred charity of national JACL), UNICEF (aimed at children) and the Japan America Society of Colorado, which is working with personal contacts in affected areas to get 100% of funds it raises directly to organizations on the ground.