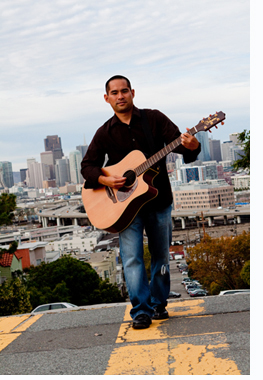 “Live My Life,” the lead track from the new album, “Close My Eyes” by Curt Yagi and The People Standing Behind Me (great band name) grabs me right away.

It reveals Yagi’s wide-ranging musical palette with dabs of color — Yagi’s funky acoustic guitar, then a drum flourish — before he splashes the canvas with bass and very cool horn section riffing, and then Yagi’s vocals and grungy electric guitar add a sonic signature that has me tapping my toes and nodding my head to the catchy melody.

The album (which is officially released on April 12 but is available for advance purchase online) is full of such sweet pop confections that take diverse musical elements and mashes them together into memorable hooks and melodies. “Sweep Me,” the second track starts with a ballad intro but kicks into an acoustic ska arrangement pushed along by that horn section.

Yagi, who’s a Yonsei, or fourth-generation Japanese American born and raised in the Bay Area, credits the reggae and ska influences to his love for the genres when he was in high school. He added alt-rock influences when he was in college. He became a musician relatively late in life — he started writing songs after his father died of a rare disease 10 years ago — and started singing at open mics.

He holds down a day job as executive director of a non-profit, Real Options for City Kids (ROCK) that serves at-risk children with enhanced public school and after-school programs. He started as a volunteer in 1998 and was also a board member before taking on his current role. So he’s an artist who already invests his heart and soul in his day-to-day life and is talented enough to also express it musically.

Yagi’s now 40 (he looks 25) and he and his band were voted “Best of the Bay” by the alt-weekly SF Bay Guardian, and they regularly play Bay Area venues. I wish I could see him live just to experience the intriguing mix of acoustic, electric and horns in person.

It’s tempting to pigeonhole Yagi’s music as steeped in R&B because of the horns, funky rhythms and his often soulful vocals, but after a few listens to the album, I’ve decided he’s a musical omnivore, who likes a lot of different sounds and is able to call on them all as elements to mix in like pigments a painter might use to get just the right shade, the right tone, the right light and shadow.

Throughout, Yagi’s vocals are a smooth painter’s medium in the mix, silky with a light touch that works on songs like the folky ballad, “Home” with lyrics that are almost saccharine but saved by his phrasing. But other times like on the next track, “If Only,” Yagi’s singing slips from a world-weary moan to a from-the-gut growl. He invests his songs with emotion effortlessly, not being over-dramatic or gimmicky. Without any melodrama, one of Yagi’s most heartfelt songs is the mid-tempo reggae-flavored title track “Close My Eyes,” a tribute to his late father who died in 2002.

There are times, like on “Always the same Thing,” when the horns remind me of horn-based pop bands of the 1960s instead of R&B or soul bands — the sharpest reference point is Spiral Starecase’s 1969 hit “More Today Than Yesterday.” OK, so Yagi’s music’s not pure pop fluff like that — it’s got alt-rock guts along the lines of Dave Matthews, Big Head Todd and the Monsters (as a singer, Yagi especially reminds me at times of Todd Park Mohr, a Korean American musician from Colorado whose career I’ve followed since the mid 1980s) and Sublime, all artists he admires. But “Close My Eyes” is such a fine listen that it leaves me satisfied and smiling after it’s over, in the tradition of classic pop records.

So it makes perfect sense to me, when I asked him via email how he sees his music, that he responded, “To describe my music, I would have to say happy acoustic rock with a touch of funk for flavor.”

I couldn’t have said it any better.

Here’s a video of Yagi and band sans the horn section performing “Take Me Away”:

And Yagi solo performing “Sweep Me” from the new album:

curt yagi people standing behind me