Posted at 10:49h in asian american by Gil Asakawa
Share 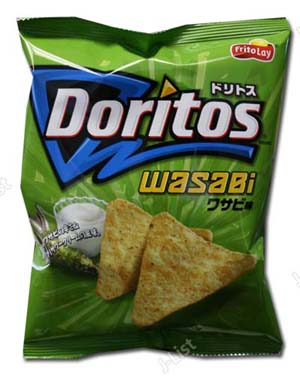 It’s one of those things that you taste and go, “Damn! Why didn’t someone think of this sooner?”

We bought a bag of Wasabi Doritos at our local Costco the other day, and though I try not to over-indulge, they’re hard to resist. I’ve always considered Nacho Doritos the perfect American snack chip. But I think Wasabi Doritos outdoes them. They’re what you’d expect: Crunchy, salty and satisfying, but instead of cheesy they have the flash of wasabi that floods your mouth and makes you go “aaaaaah.”

Wasabi’s no stranger to the U.S. Ever since sushi became mainstream in the 1990s and made for the most memorable of the early 2000s’ Budweiser “Whassup” TV commercials (see below), Americans have embraced the green glob of fiery horseradish that you mix with soy sauce to dip sushi.

Wasabi’s a common snack flavor in Japan already, as anyone who shops at Asian groceries in the U.S. knows. You can find wasabi-coated peas and wasabi-flavored rice crackers that can bring the familiar horseradish burn that makes you inhale (and sometimes cough) and brings a tear to your eye.

Frito-Lay originally produced wasabi-flavored Doritos for consumption in Japan, and apparently tested them briefly in the U.S. in 2010, because a Facebook group, “Frito Lay: Bring Wasabi Doritos to the USA! Permanently,” was started. Recent comments show that Costco across the country is now selling them, so it looks like the company has decided it’s worth diving into the U.S. market with the cool new hot flavor. Fans of the stuff no longer need to import them from Japan — at least for now. Frito Lay’s website currently lists 19 different flavors of Doritos (the Late Night Cheeseburger is a favorite, although it’s not always available at our local supermarket), but Wasabi Doritos ain’t one of them.

Just in case Frito-Lay pulls them off the market, we might have to go and buy up a bunch of bags from area Costcos and stock up.

(As a side note, almost all the wasabi we eat in the U.S. and much in Japan and the rest of the world isn’t real grated wasabi root, which is hard to grow and expensive. The green globs we crave are more common horseradish with green food coloring added.)

(Cross-posted from my Posterous blog, where I post more and often shorter bits and pieces about Asian and Asian American culture and issues.)