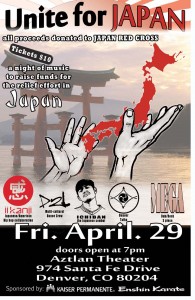 It’s great that so many local benefits in the Denver area are being held event for Japan disaster relief, but I wish some weren’t so ad-hoc and we had more time to promote them.

Tickets cost $10, and 100% of all proceeds including from a silent auction to be held during the show will be donated to the Japan Red Cross (to avoid the admin fees of the American Red Cross).

The event also needs donations in advance, such as services, entertainment/sports tickets, Asian items, etc. for the silent auction.

If you can provide a donation or want to volunteer at this event, please Mike Ninomiya at 914-826-4991. “Unite for Japan” is sponsored by the Kaiser Permanente Asian Pacific Staff Association and Enshin Karate, the traditional martial arts dojo that brings literally kick-ass, full-contact Sabaki tournaments to the area.