04 May A Colorado ramen roundup: Noodling on a theme 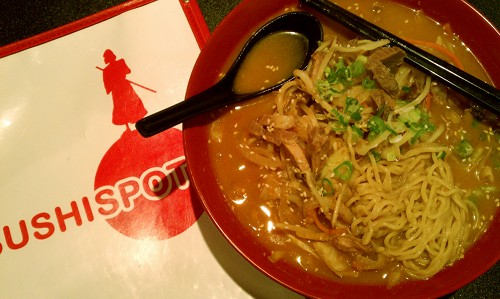 I should say upfront that although I love sushi, I’m not big fan of the crazy variety of special rolls that have been invented to entice and entertain Americans as sushi became mainstream in the past two decades. To me, even a California Roll (which I know is these days commonplace in Japan) is a mutant invention. I mean really, rice on the outside? Avocado? Come on….

I grew up with the comfort-food working class versions of sushi — fat futomaki rolls with seven ingredients (none of which is sashimi) and inari, the “footballs” of sushi rice stuffed into a pouch of fried tofu skin. The fancier kinds of sushi, even the tekka maki (tuna at the center of a tight roll) but especially all the nigiri zushi with sashimi perched atop an elongated ball of sushi rice, was for special family dinners at expensive restaurants. My mom could make all the varieties, but would mostly just do it for New Year’s feasts because it’s so “mendokusai” — a pain in the butt. So anyway, I generally don’t go to sushi bars (unless someone else is paying).

But ramen, now that’s food of the working-class gods.

I’m not talking the 10-cent instant ramen packets that have nurtured college students through their noshy meals for several decades. I’m talking real ramen, the stuff that was celebrated in the quirky Japanese movie “Tampopo” or a little less believably and a lot more predictably, the Hollywood indie flick “The Ramen Girl.” I’m talking the traditional Japanese dish that evolved out of Chinese noodle dishes like lo mein. Ramen is the dish my mom still calls “Shina-meshi,” or “Chinese food.”

My mom isn’t a fan, but I’m crazy about the kind of ramen I grew up eating when I was a kid in Japan: Hot rich soup sloshing with fresh chewy noodles, garnished with a bit of meat and a bit of vegetables, and maybe a boiled egg. I used to watch ramen delivery guys on bicycles steering with one hand and holding up a tray with eight or 10 steaming bowls perched precariously as they weaved through Tokyo traffic.

Whether it’s a street vendor, a simple counter shop or nice sit-down restaurant, I yearn for that ramen experience, and whenever I’m in cities like New York, or San Francisco or Los Angeles, I seek out the ramen-yas (ya being shops) for my noodle fix.

Denver used to be a ramen dead zone. But then in the 1990s, the Japanese chain Oshima Ramen came to town with a franchise.

It was expensive — no 10-cent late night fare this, but a $10 bowl, more with a order of excellent gyoza dumplings on the side. The owner justified the cost by explaining he imported the flour for the noodles, which were made on site. Oshima’s gone downhill in the years since — the original owner sold the place to his chef, who I’m not sure has cleaned the place in years. There’s a layer of sticky greasiness on everything from the soy sauce bottles to the countertops. And the ramen isn’t as special anymore. I doubt the noodles are made in-house these days.

Luckily, Oshima isn’t the only place in the area that serves ramen anymore. Though I’m not sure a ramen expert would agree, as a ramen fan, I can say that there are a couple of places I’d gladly go to any day for a slurp of those kinky noodles.

That’s why I was so happy to hear that Bento Zanmai simply got folded into the nicer location of its sister eatery, Sushi Spot. I went there today and had a bracing bowl of Chashu Miso Ramen.

The soup is salty with red miso paste and robust with chili pepper, the noodles plentiful and the liquid is topped with tasty strips of chashu, marinated barbecued pork (I prefer the slices instead of strips but I can live with it). Sushi Spot’s ramen is also thick with vegetables, including napa cabbage and lots of bean sprouts.

I’ll go back for their other ramen including Tonkotsu Ramen, the pork-broth style that’s rich and fattier, as well as the other Japanese fare from Bento Zanmai. They serve the fat udon noodle soups, a solid yakisoba fried noodle dish, and a variety of very good bento box meals, and of course those fancy shmancy sushi rolls which I suppose I’ll try sometime.

Back in Denver, we used to have a funky ramen dish at Taki’s back when the late Hisashi Takimoto ran the downtown restaurant on Colfax that was called “Flu Killer Soup” because it had a miso and ginger soup base. I just checked and Taki’s no longer serves ramen, and there’s no Flu Killer Soup on the menu.

But a new source for ramen has appeared, miraculously, to take Taki’s place: Kokoro, the local casual chain with three locations that grew out of Beef Bowl when the Japanese chain pulled out of Colorado in the ’80s. Kokoro is celebrating its 25th year, and after testing out ramen at its 6th and Broadway location for months, owner Mareo Torito has expanded the offering to his other locations.

Kokoro’s ramen hits the spot — the ramen spot — although there’s only one flavor, Shoyu (soy sauce) Ramen. They serve lots of noodles (a little chewier than the bowl I had today at Sushi Spot) in the lighter soy-based soup, topped with thin-sliced pork, marinated bamboo shoots, Japanese style boiled egg, seaweed and scallions. It’s also cheap at $6.99, and leaves enough bucks to buy some of the other menu items, like the basic beef bowl (on brown rice, gotta be healthy) and Kara-Age, Japanese-style marinated fried chicken.

Sometimes, though, a higher cost brings great rewards. One of the best bowls of ramen in the area is hands-down at Bones, an Asian-influenced fusion restaurant owned by the brilliant chef and restaurateur Frank Bonanno, who’s decidedly not Japanese. The restaurant serves some killer dishes that pay serious homage to Asian cuisines, but the Lobster Ramen at $18 is the piece de resistance (to mix my lingusitic metaphors) of area ramen.

The noodles are perfectly toothy, and they swim in a broth that’s thick and rich like tonkotsu pork soup, but delicious with lobster and miso, with chunks of poached lobster and garnished with edamame soy beans. This is light years from your college meal of 10-cent ramen boiled in a saucepan and a packet of powder mixed in.

My other favorite ramen in the area isn’t exactly close distance-wise. But it’s worth a drive to Windsor, just south of Greeley, to dine at Okole Maluna, a wonderful authentic Hawai’ian restaurant run by Andy and Juliet Higa, who met at Colorado State University even though they’re both from Hawai’i. His family runs a Japanese restaurant back home; hers a Chinese restaurant. They graduated with business degrees and decided to open a gem of a Hawai’ian eatery.

Everything we’ve had on the menu’s terrific, but the Saimin, a Hawai’ian variant of ramen (sai mein translates to “thin noodles”), is a must-order, even if you get it as an extra entree and treat it like a side of soup. The broth is perfect, the noodles perfect, the kamaboko fish cake slices add the right extra dimension, and — bless ’em — they top off the saimin with slices of Spam instead of chashu. So Hawai’ian!

And finally, two more stops on the magical ramen tour:

I’d heard for a couple of years about a Japanese restaurant in Longmont that used to serve ramen but changed owners and stopped. I happened to be farther north in Fort Collins one day and decided to have lunch at a Japanese restaurant with the whimsical name “Gohan Time” (“gohan” can mean just rice, or a meal). There was ramen on the menu so I ordered it and enjoyed the noodles. I asked them how long they’ve been running the restaurant and it turned out the were the ones who ran the restaurant in Longmont.

The other ramen I kept hearing about but never tried was a mysterious setup in a grocery store in Niwot, a tiny town northeast of Boulder. When we finally went I realized why people raved about Sachi Sushi, which is a cute counter with a few tables in front, snuggled along wall of the Niwot Market, next to the bakery/sandwich counter. Owner Tsukasa Hibino, who worked for years at Sushi Tora in Boulder, runs Sachi Sushi as a one-man band, making the food special…. and sometimes slow.

Because ramen takes so much preparation, he only makes it on Sundays. It’s worth the trek… and the wait. His tonkotsu ramen is very authentic, almost greasy with the richness of pork fat.

Between all these choices, I can have my ramen fix whenever I want — and not have to fly to LA or San Francisco for a bowl.

Domo, one of our favorite Japanese restaurants (and the most unique Japanese restaurant), has begun serving ramen in recent months. They offer shoyu (soy sauce), miso or kara miso (spicy miso) broths topped off with a choice of veggies, chicken or pork, for lunch or dinner. I had the kara miso and thought it was great.

And, although I haven’t tasted the ramen, Kiki’s on South Colorado Blvd. (a tiny place I used to eat at often but haven’t in years) serves ramen according to Yelpers, and so now does Japon (a miso ramen is on the lunch menu, but not the dinner menu). I’ll have to go to Kiki’s again soon — the menu lists a handful of ramens including tonkotsu but also a cold ramen in addition to Hiyashi Chuka Soba, which is a traditional summertime cold ramen dish.

The area’s gone ramen-crazy in just a few months — I’ll keep busy trying them all.