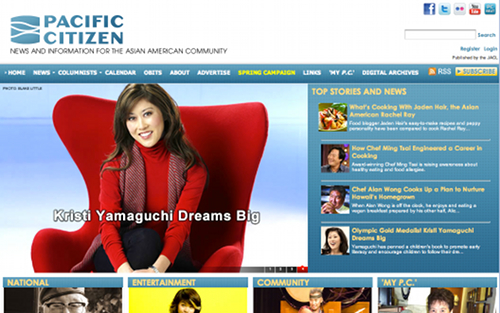 The PC is, after all â€“ especially for people who live away from the West Coast and donâ€™t have easy access to the Rafu, Nichei Bei or other papers â€“ the only national news source about us. For members, itâ€™s often the most visible connection to JACL and a regular reminder of our support for this important organization.

The PC was also, upon its start in 1929, one of the first newspapers serving Japanese Americans all in English. The Rafu, which had been started in 1903 all in Japanese, added a weekly English section in 1926 and committed to daily English pages in 1932. These changes came about because the Nisei were growing up and preferred their news about the community in English, not Japanese. The Pacific Citizen was proof that the Nisei were coming of age.

Itâ€™s impossible to overstate the importance of all these Nikkei community newspapers, not just the Nichi Bei and Rafu and PC, but Nikkei West, North American Post and many others are still vital sources of information to their local communities. So were the many newspapers that have folded over the years, including the ones brought down by the economic downturn and downfall of the newspaper industry in general, the Hokubei Mainichi in San Francisco and Denverâ€™s Rafu Shimpo (my hometown Nikkei paper, where Bill Hosokawa and I traded columns every other week for years) among them.

Today, the PC has evolved and covers not just the small (and shrinking) JACL community, but the larger AAPI world, with dedicated reporting, amazing scoops (the PC led the country in coverage of Ehren Watada) and impressive access to pop culture newsmakers (every issue brings interviews with AAPI stars from sports such as Kristi Yamaguchi, or Hollywood like Tamlyn Tomita). And, the PC continues to serve the very important role of keeping us all informed about whatâ€™s happening at JACL, covering every national board meeting, convention, and district meetings.

The staff of the PC conducts all of this world-class journalism with a very small budget. The PC each year is given less and less of its budget from national JACL, and relies on advertising and, critically, the annual Spring Campaign to raise the funds to maintain its high standards and cutting-edge, evolving online presence. I know how tough it is for Executive Editor Caroline Aoyagi, Assistant Editor Lynda Lin and their tiny staff to keep putting out such a quality newspaper and dynamic website week after week, month after month. I served as the PC Board Chair on the national JACL board for six years and I have nothing but respect for their accomplishments.

I want to inspire even a little of this level of respect in you, the PCâ€™s readers and JACL members, so that you might also appreciate the level of effort it takes, and to support their efforts with your donation to the Spring Campaign.

You wonâ€™t regret it.

Youâ€™ll feel the PCâ€™s impact all your life â€“ perhaps in some future panel discussion, when you realize half the room has also supported the PC for years, or when you find out a journalist you respect got her start at the PC. It’s simple to donate to the PC’s annual spring campaign via Paypal. Just click the “Make a Donation” button.

This post was originally written for the Pacific Citizen to run in its print edition to encourage the newspaper’s readers to donate to the Spring Campaign. If you believe in Asian American media and civil rights news coverage, please consider donating whatever you can.