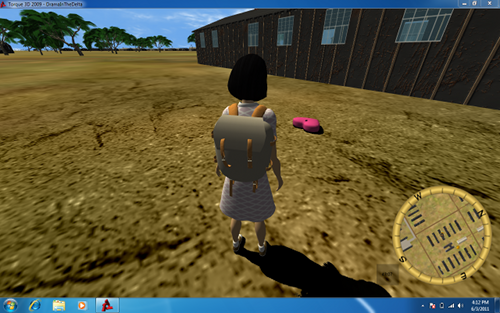 For many older Japanese Americans, the first thing they ask of each other when they meet other JAs is, “what camp was your family in?” and they’re not talking about summer camp.

But now the University of California in San Diego is developing a very modern interactive way to teach people about internment. They’re creating an online, 3D role-playing game so you can experience a little bit of the choices you would have had to make, and the life you would have lived, in Rohwer or the other Arkansas camp, Jerome. The game, called “Drama in the Delta,” is available in a downloadable prototype (Windows only), and you’ll eventually be able to play the game online.

The user takes on the role of “Jane,” a young girl whose family is sent to camp, and you have to wander amongst the tar-paper barracks and, like in many role-playing games, pick up props and clues.

It may seem a little creepy, and it might bother or bewilder older JAs who lived through internment (Erin’s folks, for instance). But if the game helps a new generation of Americans to feel even a little empathy for what Japanese Americans went through 69 years ago, I’d say this is a very cool project.

(Thanks to Angry Asian Man for the heads-up on this game.)