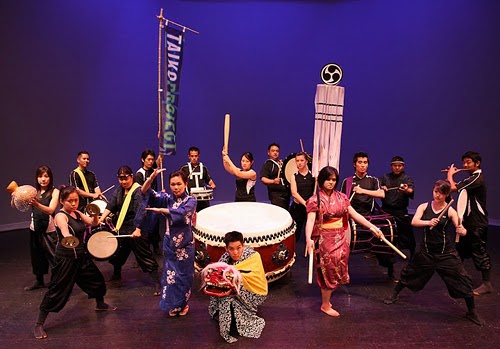 Here’s how TaikoProject describes itself:

Over the last 11 years, TAIKOPROJECT has established itself as the leading creative force in North American taiko, developing some of the most ground-breaking work and collaborative works in American taiko history to date.

In 2000, the group formed and developed an innovative new taiko theatrical production, â€œ(re)generation,â€ which rethought what a taiko concert could be, infusing video, multimedia, dance choreography, storytelling, and hip-hop rhythms into what the LA WEEKLY called â€œnot your mamaâ€™s taiko, but it may be your hip, younger cousinâ€™s.â€

In 2005, TAIKOPROJECT was selected from an extensive audition process to serve as the creative lead for the now iconic Mitsubishi Eclipse national commercial ad campaign, widely regarded as the first and only major corporate advertising campaign to feature taiko drumming. Also in 2005, TAIKOPROJECT became the first American taiko ensemble to compete in the Tokyo International Taiko Contest, Japanâ€™s most highly regarded taiko contest, and became the first American group to win First Place. They are still the only non-Japanese group to have ever won the top prize.

In 2009, TAIKOPROJECT was selected to perform in the 81st Annual Academy Awards alongside John Legend and A.R. Rahman for the international telecast. In 2010, TAIKOPROJECT was invited to perform with the rock band 30 Seconds to Mars at the famed Greek Theatre in Hollywood, and also with music legend Stevie Wonder at the Bonnaroo Festival in Tennessee.

Most recently, TAIKOPROJECT performed with Usher and Justin Bieber as part of a musical medley at the 53rd Annual Grammy Awards, broadcast from LAâ€™s Staples Center.

This is a group that’s bringing taiko and Japanese culture to whole new audiences at every opportunity. Damn, I wish we lived in LA!

Meanwhile, those of us in the hinterlands can click through TaikoProject’s YouTube channel. Here’s one video below, all ninja’d out and performing with Justin Bieber and Usher at the Grammys: