02 Aug Why I love the Colorado Dragon Boat Festival 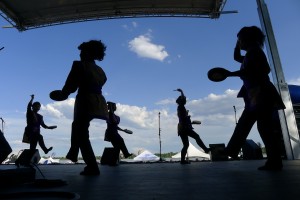 Following the Cultural Unity sampler, which drew a huge crowd to the stage, most of the audience stayed for the Colorado Okinawa Kenjinkai, a group of women from Okinawa who preserve the traditional dances of Okinawa, a culture thatâ€™s distinct from Japan. 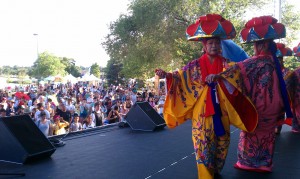 The group has its own educational mission, to explain that Okinawa was once its own country with its own distinct culture. They demonstrated their lovely, flowing folk dances to the audience, who were still dazzled from the hip-hop set and amazingly open to something completely different. They talked about Okinawan history and explained the differences in language between Japanese and Okinawan.

And though the two sets must have been a culture shock for the audience, the â€œah hah!â€ moment that struck me was that this very dichotomy between tradition and today, between preserving our cultural past and embracing our pop present, is what the Colorado Dragon Boat Festival has crystallized for 11 years.

When the Okinawan group ended its performance to wild applause, and I introduced the dayâ€™s finale, a Japanese Bon Odori Dance led by the Denver Buddhist Temple Minyo Kai group, I got all misty eyed. This group performs an Obon dance once a year, at the Sakura Matsuri in downtown Denverâ€™s Sakura Square. Many of the peope who join the dance there are non-Asian but theyâ€™re Japanophiles.

The Colorado Dragon Boat Festival is an entirely different audience of Asiaphiles and the merely Asia curious, as well as people who just love a fun family-friendly summertime event. Most of the audience from the hip-hop performance was still in front of the stage and we had them line up in concentric circles in the grass. 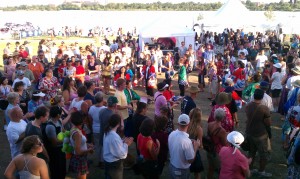 With a little urging, they began following the movements of the Minyo Kai dancers in the middle circle. I saw people having fun, trying new things, learning something about a culture they may not have been familiar with, and embracing the spirit of the Colorado Dragon Boat Festival as we, its organizers, have envisioned it for over a decade.

I felt a welling of emotion from this proof of the power of culture to bring people together. Thatâ€™s why I put so much time and energy into volunteering for this event: Weâ€™re breaking down barriers between people by introducing and education everyone to the richness of our varied traditions as well as the vitality of our Asian American identity.

Now that the festival is over weâ€™ll assess its success financially, but I know that culturally, we accomplished a lot over one weekendâ€™s work.

Here are some more videos from the festival’s main stage:

Monkey Balls frm Thai Pepper, one of the most popular items every year in the Taste of Asia Food Pavilion.

Cool panoramic shot during the middle of the day:

And here’s one during setup in the morning, when things were calmer: