08 Dec Denver’s Lao community suffered the tragic loss of its Buddhist temple, and needs your support to rebuild 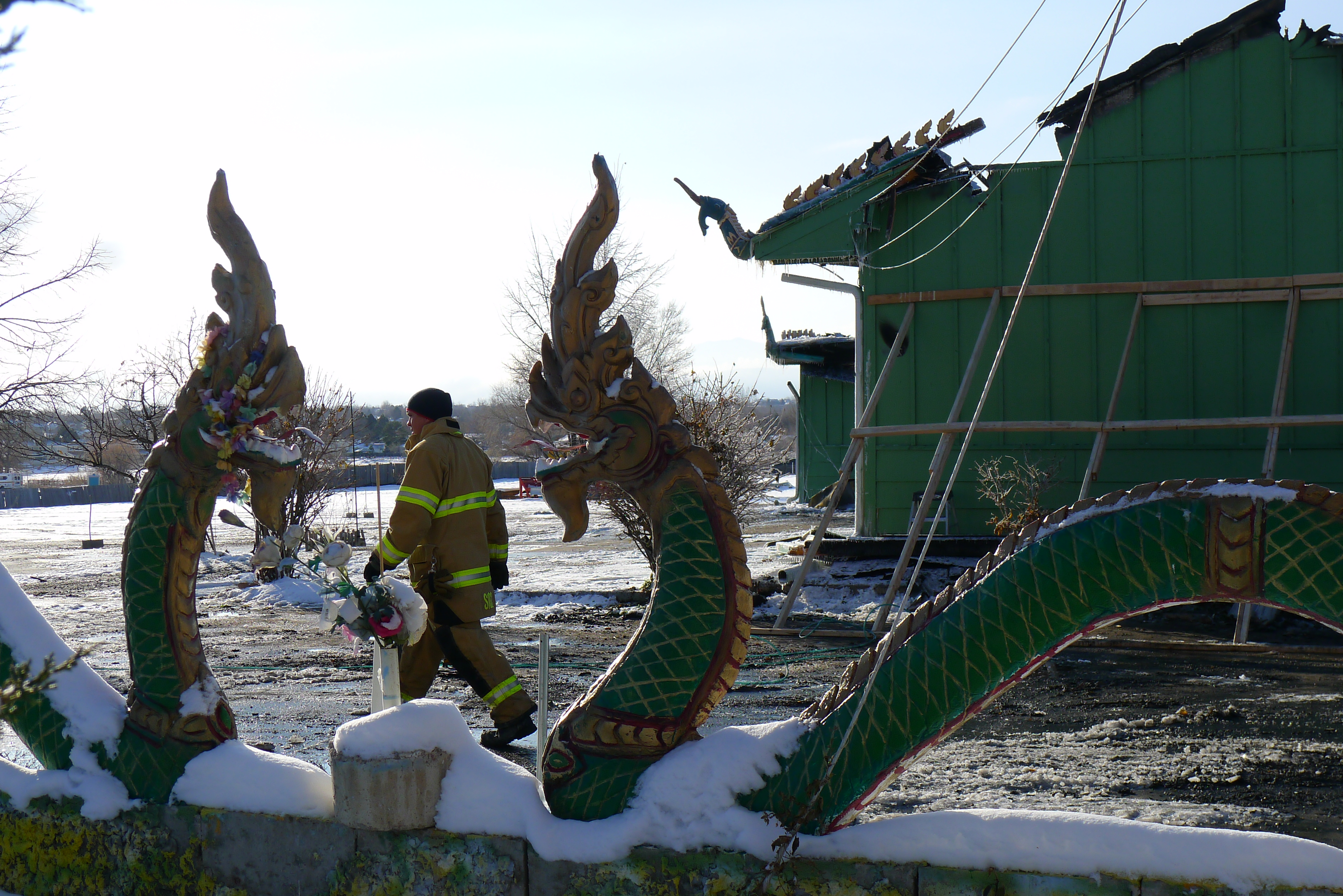 Colorado’s Laotian community woke up yesterday to a terrible tragedy: The morning news shows kept showing breaking news footage from their helicopters circling over a raging fire in Westminster, off 108th and Wadsworth. The Lao Buddhist Temple of Colorado was burning down, the flames and smoke engulfing the building in less than half an hour as firefighters poured water from their bucket trucks in the sub-zero chill of dawn.

I have a special place in my heart for the Laotian community, so my heart broke along with theirs as I watched the coverage of their loss.

My wife Erin and I first met the Laotians because of their dedication and passion for boat racing, through our volunteer involvement with the Colorado Dragon Boat Festival. If people know about it, Laos is probably remembered most for its part in the Vietnam war.

It’s a landlocked country in Southeast Asia, but it’s criss-crossed by a network of 1,000 rivers, and boat racing is a popular national sport with festivals all over the country every September and October. The Lao Buddhist Temple of Colorado sponsored both adult and youth teams from the start of the Colorado Dragon Boat Festival, and they kick some serious butt — the adult team has won multiple championships and the temple’s youth team has taken home the top prize something like four years in a row.

After the first year when the adult and youth teams both won their divisions, they invited the festival organizers to join their celebration party. Erin and I attended and learned some cool traditional Laotian dances (like country-style line dancing but with added hand and finger motions), and had some terrific traditional food. Every year at the festival, the Laotians display an incredible spirit and love for their culture, marching through the “Team City” area playing musical instruments like a bowed lute and pan pipe, and grilling incredible Laotian food like sausages (not your typical Johnsonville brat!) at their team area.

The Laotians epitomize the ability of recent immigrant communities to hang together and promote their traditional culture and values while they (especially the younger generation) embrace American culture and values. That sense of unity will serve them well in the months to come, as they rebuild “their heart and soul,” as one tearful women described the temple. 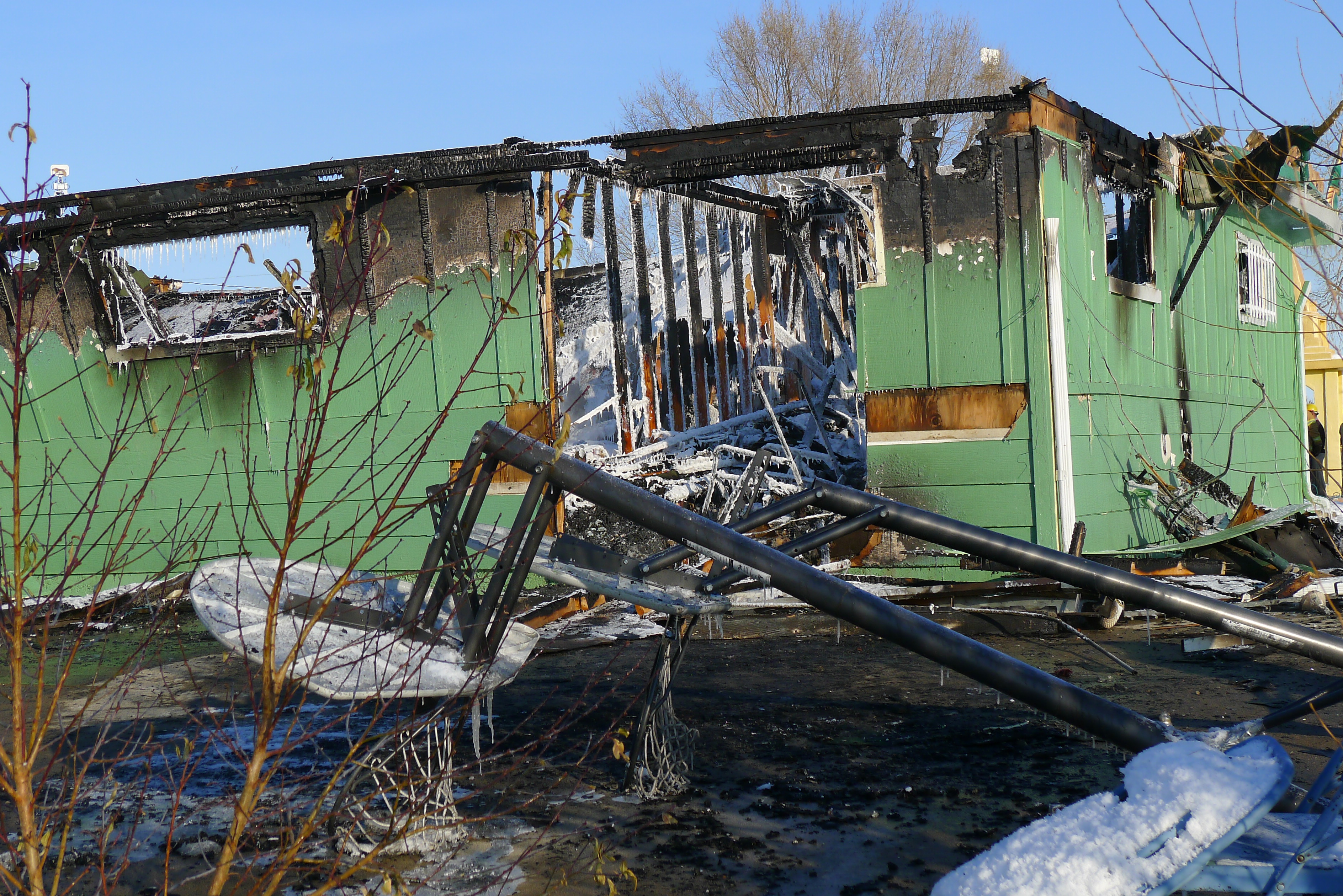 No cause for the fire has been announced, although reports claim that arson is not suspected. Luckily, no one was badly hurt. The head monk for the temple, Ounkham Veunnasack, was staying in the building when the fire started and was taken to the hospital yesterday and treated for smoke inhalation, but the temple’s two other monks were staying in an adjacent building that didn’t catch on fire.

I visited the temple yesterday afternoon and felt an indescribable sadness for their loss. Firefighters were still milling about, sifting through debris, probably investigating the cause of the fire. Police blocked the street (the temple faces a side street, not Wadsworth Blvd., which is a major thoroughfare). But a steady stream of Laotians kept coming by, parking their cars down the block and walking to the temple to pay their respects and offering their help.

One young man sitting in his car with his baseball cap askew rolled down the window and turned down the hip-hop on stereo to ask me details about the fire. I told him what I knew. He told me he’d helped the head monk for several years and considered him a mentor.

A woman who parked her car at the end of the street began sobbing when she got her first look at the burned-out skeleton of the temple. She said she left work early when she first heard about the fire. Many of the visitors had just heard about the tragedy through the community grapevine while at work.

The community has established the Lao Buddhist Temple Fire Relief Fund at 1stBank, a Colorado-based bank chain, and is accepting donations to help rebuild the temple. You can find the nearest 1stBank location here, or call Sy Pong, at 720-210-7555 or Maly at 720-217-6142.

It’ll help the Laotians bring back to life the heart — and soul — of their community.

NOTE: You can donate to the temple’s rebuilding efforts through the LaoTempleCO.org website.