08 Dec PHOTO: Who are these incredible women fighting fires at Pearl Harbor on Dec. 7, 1941? 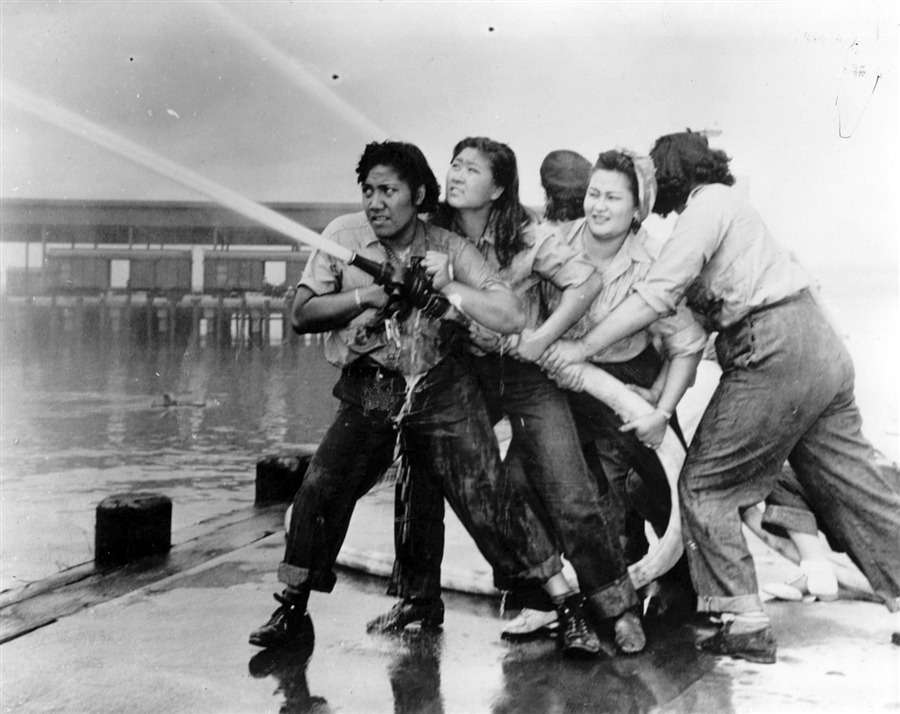 UPDATE DEC. 13: NBC Nightly News reported last night that one of the women in the photo above has come forward, and said that the photo was not taken on Dec. 7, as has commonly been captioned every time it’s been published for decades. Instead, Katherine Lowe, who’s now 96 and still living in Honolulu, says she was at church the morning of the attack. But she and her friends from the Dole pineapple factory signed up as civilian volunteers and she’s sure the photo was taken sometime after Dec. 7, during a training session at Pearl Harbor. It’s great to have this incredible mystery cleared up, and from my perspective, the photo is still an amazing testament to the fact that a multicultural group of women worked together in the days following the Pearl Harbor attack, for the cause of protecting our country. It’s a powerful, moving image even though it wasn’t shot during the bombing.

I thought I’d seen pretty much every photo taken at Pearl Harbor 70 years ago — so many of them are so iconic. But here’s a new one that’s already seared into my visual memory: Women firefighters aiming a hose following the attack on the U.S. Navy base that terrible Sunday.

It was included in a series of photos on the MSNBC Photo Blog, and then posted by itself on MSNBC’s Open Channel crowdsourced investigative blog when the photo began to attract a lot of attention. None of the women are identified, but it appears that there are Asians and a Polynesian or Pacific Islander (maybe African American?) woman among the group.

I’m posting it here with apologies to Three Lions/Getty Images as a public service to help get the word out and hope that someone can identify any of the women. If requested, I’ll be happy to take down the image.

Maybe someone grew up with the grandmother telling stories about being on the dock at Pearl that day….

Thanks to TzeMing Mok on the APA Mavens list for the heads-up.