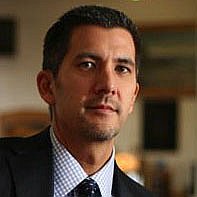 The Japanese American National Museum today announced it’s named a new Chief Executive Officer, G.W. “Greg” Kimura, to lead the Los Angeles-based institution. Kimura is a hapa (mixed race) fourth-generation Japanese American from Alaska, whose most recent position was as the head of the Alaska Humanities Forum, the state’s humanities council. He seems to have done a terrific job there, and doubled the AHF’s revenues during his tenure.

Kimura’s also a well-traveled guy — I suppose most Alaskans are, because honestly, who can stay put in Alaska all your life? (Joke. Besides, the state gives residents money every year that can be spent on travel to warmer climes.) He has a Masters in Divinity from Harvard and a Ph.D. in philosophy of religion from Cambridge, and he’s now leaving the snows of the north to settle in the sunny City of the Angels.

I’m looking forward to how he moves JANM forward into the future. Like many museums, JANM focuses a lot on the past — and in the case of Japanese Americans, why not? The Internment experience during World War II is the defining perod for many JA families.

But JANM in recet years has also been really smart about hosting forward-looking exhibits featuring artists such as Hapa activist Kip Fulbeck (whose exhibit moved Kimura when he saw it during a visit to the lower 48), rocker/visual artist Mike Shinoda of Linkin Park, and partnering with hip Asian American culture mag Giant Robot.

He’s a perfect person to lead the museum, because as a hapa younsei, he’s a reflection of the ever-evolving Japanese American community. I bet he’ll bring fresh ideas and renewed energy to JANM.

I’d lay odds that Kimura, with his academic background in religion and sprituality, at some point has JANM delve into the religious history of JAs, which mostly seems to come down to Shinran Buddhist and UNited Methodist churches. But I expect he’ll bring a new vitality and energy to the museum, which is one of my favorite places to go whenever I’m in LA (they have the coolest gift shop, and they’ve sold a lot of copies of my book “Being Japanese American“… full disclosure!).

The Board of Trustees of the Japanese American National Museum announced today the hiring of G.W. (Greg) Kimura, Ph.D., as its new Chief Executive Officer. The appointment concludes an extensive national search begun last August.

“Dr. Kimura brings a unique set of leadership skills, intellect and experience to the CEO position along with his unbridled passion for the Museumâ€™s mission,” explained Gordon Yamate, Chair of the Board of Trustees and head of the Board Search Committee. “I view his appointment as transformational for the Museumâ€”he will ably lead and elevate the Museum to new levels of programming, experiences and excellence, particularly with our broadening and more diverse audiences.”

Since 2006, Dr. Kimura has been the President/CEO of the Alaska Humanities Forum (Alaskaâ€™s state humanities council), where its revenue doubled during his tenure and its standing jumped to the third largest in the nation. He has an extensive academic background as a department head and professor with a Masters in Divinity from Harvard University and a Ph.D. in philosophy of religion from Cambridge University.

Former Secretary of Transportation Norman Y. Mineta, another member of the Museumâ€™s Board Search Committee, observed, “In many ways, Greg Kimura represents our evolving community. He is a yonsei (fourth generation Japanese American) who grew up outside the larger historic Nikkei communities. Yet he has maintained his cultural ties, has a thorough understanding of our communityâ€™s history, and has expressed his desire to pass his heritage on to his own children.â€

Despite living in Alaska, Dr. Kimura has often visited the Japanese American National Museum when he was in Los Angeles. As a Museum member, he recalled being personally touched by several Museum exhibitions, including kip fulbeck: part asian, 100% hapa (2006).

“I have been profoundly moved at the Japanese American National Museum, as a visitor and member. Coming to the Japanese American National Museum is truly like coming home,” Dr. Kimura explained. “The Museum has an important story to tell about culture, diversity, and what it means to be American. This matters deeply to us all. In an increasingly complex and contentious world, the Museum can be not only a place to celebrate these enduring values, but to do the visionary work to guide the future.”

The Japanese American National Museum is dedicated to fostering greater understanding and appreciation for Americaâ€™s ethnic and cultural diversity by preserving and telling the stories of Americans of Japanese ancestry. Since its incorporation in 1985, the National Museum has grown into an internationally recognized institution, presenting award-winning exhibitions, groundbreaking traveling exhibits, educational public programs, innovative video documentaries and cutting-edge curriculum guides.

In 2010, the Japanese American National Museum was presented the National Medal by the Institute of Museum and Library Services, the highest honor possible for an American museum. Institutions are recognized with this singular award for their “extraordinary civic, educational, economic, environmental, and social contributions.” The Japanese American National Museum is only the fourth institution in California (and one of only two museums) to receive the National Medal.