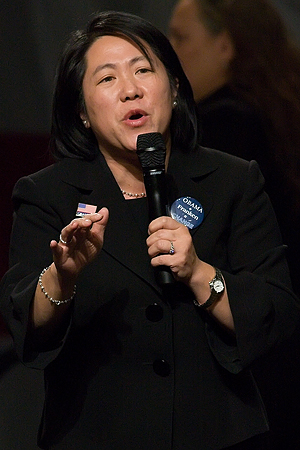 Moua is clearly committed to empowering Asian Americans and Pacific Islanders; the AAJC is the perfect place for her leadership.

She was born in Laos, and her family fled to Thailand at the end of the Vietnam War, where they lived in a refugee camp for four years before being resettled to Minnesota, one of the largest Hmong communities in the U.S.

She attend Brown for her bachelor’s, UT-Austin for her master’s and the University of Minnesota Law School before running for office. She opened the door to public service for other Hmong — I recall even when I first met her, she was mentoring a young man in her office to run for office someday.

WASHINGTON – The Board of Directors of the Asian American Justice Center (AAJC), a member of the Asian American Center for Advancing Justice (Advancing Justice), has named Mee Moua as president and executive director of one of the nation’s premier civil rights organizations. On March 19, Moua will succeed Karen K. Narasaki, who announced in June she is stepping down after 20 years of service.

“The board of directors selected Mee Moua following a national search,” said Paul W. Lee, chair of AAJC’s board of directors. “We are very excited to have Mee join with the board and staff to build on the excellent work of AAJC and continue to lead our efforts to advance equality and justice for the Asian American community.”

AAJC is a nonpartisan, nonprofit national organization whose mission is to advance the human and civil rights of Asian Americans, and build and promote a fair and equitable society for all. It is respected for its effectiveness in national advocacy and public education through the use of policy development, community education and litigation. AAJC is recognized for its expertise on affirmative action, broadband and media diversity, census, voting rights, immigration, immigrant integration and immigrant rights. AAJC has a network of 125 community-based organizations in 29 states and the District of Columbia.

As president and executive director, Moua will lead AAJC’s efforts to promote civic engagement, forge strong and safe communities and create an inclusive society. She will work with the AAJC board and staff, as well as the other Advancing Justice affiliate members-Asian American Institute in Chicago, Asian Law Caucus in San Francisco and Asian Pacific American Legal Center in Los Angeles-to empower Asian Americans, Pacific Islanders, Native Hawaiians and other underserved communities. The Asian American population is the fastest growing minority community and now comprises 6 percent of the total population.

“I am inspired by AAJC’s accomplishments of the last 20 years,” said Moua. “I am excited, yet truly humbled and honored to have this opportunity to work with the board, staff and all our partners to advance human and civil rights for our growing and diverse communities.”

Moua comes to AAJC after serving as the vice president for strategic impact initiatives at the Asian & Pacific Islander American Health Forum (APIAHF), where she was the executive administrator of the Washington, D.C. office and managed the communications, government relations, policy analysis and research functions of the organization.

Before joining APIAHF, Moua served three terms in the Minnesota Senate, where she chaired the Judiciary Committee, and had oversight responsibility for all state agencies in matters related to criminal, civil and administrative law and procedures. As a policymaker, Moua enacted laws to expand greater protection for Minnesota’s children and youth, vulnerable adults and crime victims. She tackled challenging issues such as collateral sanctions, second chance and the disproportionate impact of the criminal justice system, privacy protection, and championed stricter enforcement of the state’s sex and labor trafficking laws. She was the first Hmong American woman to be elected to a state legislature.

“Mee already has an impressive record as a strong civil rights advocate,” said Narasaki. “Her tremendous experience, insight, passion and outstanding reputation make her a wonderful choice to lead an organization that has become so important to ensuring the voices of the nation’s growing Asian American and Pacific Islander communities are heard.”

“We have had the pleasure to work closely with AAJC over the years and have always respected its great work and leadership,” said Kathy Lim Ko, president and CEO of APIAHF. “While we are sad to see Mee go, we congratulate her on this wonderful opportunity and look forward to our continued partnership with her and AAJC on civil and human rights issues.”