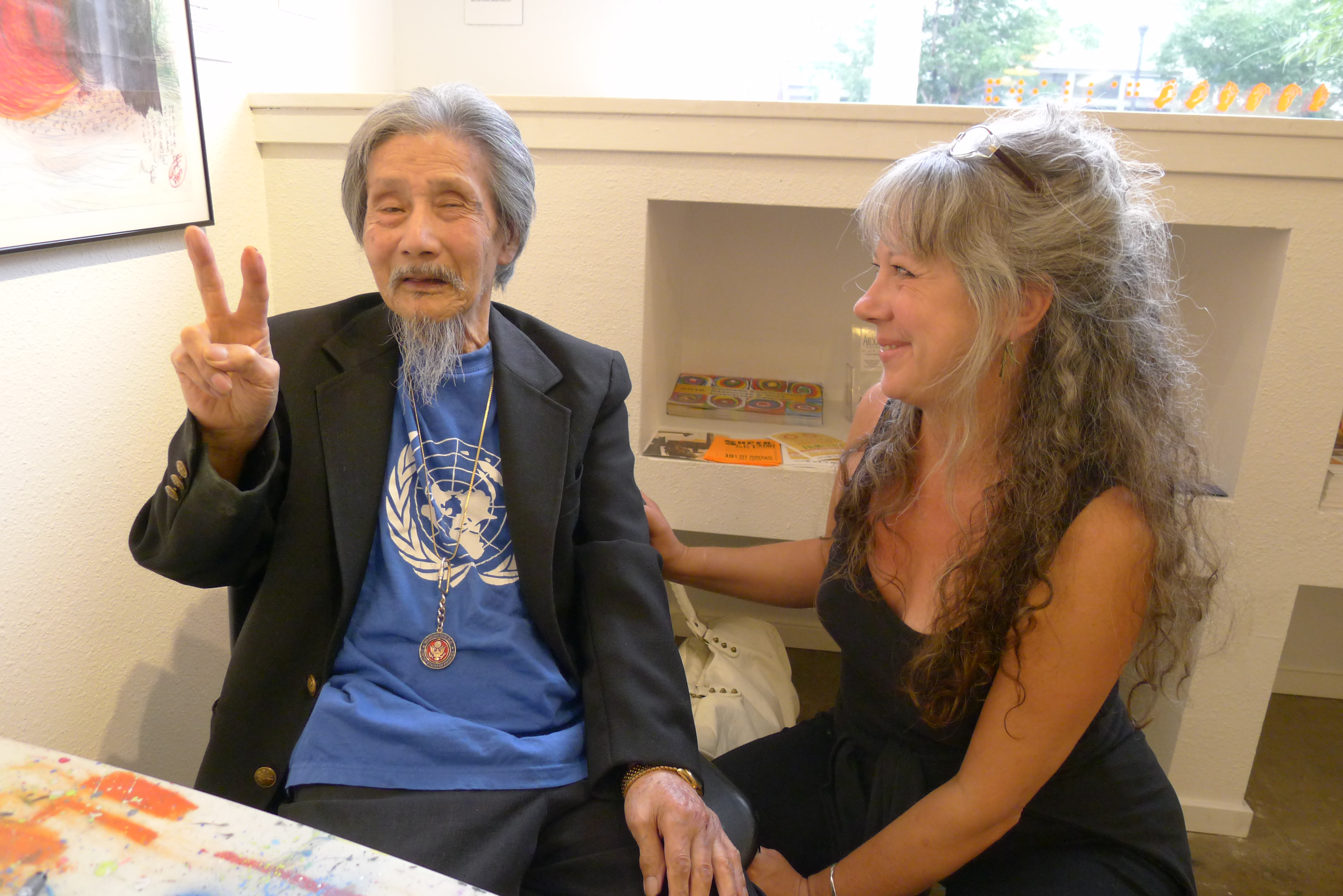 The documentary she produced, “The Cats of Miriktani,” is an amazing chronicle of a life journey for both Tsutomu “Jimmy” Mirikitani and Hattendorf.

It turned out that as a young man, the Sacramento, California-born Mirikitani had been an artist with a growing reputation, but during World War II he had been imprisoned in a Japanese American concentration camp along with 110,000 other people of Japanese descent — half, like Mirikitani, who were US-born American citizens. The experience angered him so much that he refused to renounce allegiance to Japan (a question all internees were forced to answer) and he gave up his US citizenship in protest.

A man without a country, he became embittered and went “off the grid” in the years after the war. He migrated to the east coast and met abstract expressionist painter Jackson Pollock, and eventually worked as a chef for a wealthy man in New York. After his benefactors’ death in the 1980s, he became homeless, a man without an identity.

But the thing is, he didn’t know that the government had reinstated the citizenship of the Japanese American internees who had given up their citizenship in protest, because they had done so under duress. The letter informing him of his status never got to him because he had moved so much.

“The Cats of Jimmy Mirikitani” began as a touching film about a mysterious, talented homneless man, but it turned into an emotional tale of a man reclaiming his identity — his citizenship, his home and place in society, and even his family.

Mirikitani and his sister had been separated and sent to different internment camps, but Hattendorf, through her tireless efforts, found that he had a niece, Janice Mirikitani, who was Poet Laureate of San Francisco, and through her, re-connected the artist with his sister, 60 years after they had lost contact with each other. Hattendorf also helped Mirikitani mount an exhibit at a Seattle museum, and travel to Hiroshima to reconnect with his relatives in Japan. These trips are included as extras in the DVD.

It’s an amazing story of two amazing people, and Erin and I were honored to meet both of them, along with the film’s other producer and cinematographer, Masa Yoshikawa, last night at a gallery opening of Mirikitani’s work.

The exhibit, which will be on view through July 20, is at VSA Colorado / Access Gallery, 909 Santa Fe Drive. Mirikitani, Hattendorf and Yoshikawa all attended, and they’ll also be at the gallery tonight for a private reception ($50 admission, which will go towards the filmmakers’ travel costs, Mirikitani’s Trust, the gallery and the Japanese Amnerican Resource Center of Colorado, the principle organization that sponsored the exhibit here).

The gallery was full of well-wishers as well as curious art lovers (it was First Friday along the Santa Fe Arts District, a monthly street party celebrating the arts) when Mirikitani, helped by Hattendorf, made his entrance and spontaneous applause broke out. He looked frail but spirited, and waved his trademark peace sign for everyone as cameras and phones clicked away.

I confess to acting like a groupie meeting a rock star when we asked Mirikitani to autograph our copy of the DVD, as well as a portrait that was taken of him by renowned Asian American photojournaliost Corky Lee. He impishly signed the front of the photograph, on the border of a painting Lee had included in the shot.

The filmmakers had no expectations, filming the then-80-year-old artist 12 years ago, that the film would still resonate today and allow the three of them to travel all over the world sharing Mirikitani’s story. Hattendorf said she’s working on a documentary about “what peace looks like — we all know what war looks like, but not peace.” But she’s finding it difficult to find the time to work on a new project — they just arrived in Denver after more than a week on the road, during which they particpated in the annual pilgrimage to the Tule Lake internment camp site.

We thanked Hattendorf for making the film, for reaching out for humanitarian reasons to save Jimmy Miriktani’s life. She said finding Mirikitani saved her life too, because it helped her find her vision and voice as a filmmaker instead of being a freelance editor. The film has been a gift for both of them.

Sometimes, you have to believe in karma, and karmic connections. This is one of those times. And we’re all the richer for the crossing of their paths.

Here’s a trailer for the film, which just hints at the power, depth and beauty of the documentary:

From the weekend spent with Mirikitani, Hattendorf and Yoshikawa. here are a few videos:

First a charming performance of a traditional folkson, “Tokyo Ondo,” by Mirikitani at the gallery during the private reception on Saturday:

Then here are parts 1-5 of the Q&A session (raw video) following the Sunday screennig of the film (the last part is actually Mirikitani signing prints and DVDs after the Q&A):