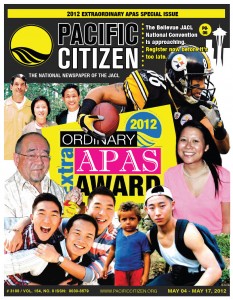 I cautioned that both these fine journalists might flee for other media jobs. Finally, that’s what happened with Caroline, who was wooed away for another job. Lynda is moving because her husband was suddenly transferred overseas by his company.

The PC is obviously in a unsettled transitional time. A time of crisis.

But I’m hopeful that the PC will emerge, like many other news organizations have done in the past couple of years of economic turmoil, with a renewed sense of purpose applied to the same principles of newsgathering and storytelling, and supporting JACL’s mission. We’re looking for a new Editor and Asssitant Editor. We’re also looking for a Business Manager. That leaves Nalea Ko, the talented young reporter, and Eva Lau-Ting, the Circulation manager and 13-year veteran of the staff.

It’s a crisis for the PC. But it’s also an opportunity, to find great people to fill the positions, and set the PC on a path of even greater accomplishments than Caroline, who helmed the paper for 15 years and into the digital age with the pacificcitizern.org website.

Journalism as an industry is evolving, and so can the PC.

JACL’s national board can evolve with the PC, because the organization has new leadership including a new National Director, and newly-elected National President and vice presidents, as well as a new P.C. Editorial Board Chair.

It’s a rare confluence of change in the national organization and I’m optimistic that the Pacific Citizen can maintain its excellence with new editorial leadership to match the JACL’s leadership. Let’s harness everyone’s renewed energies to help the PC grow and prosper, and take it into the next era.

I warned the JACL’s national board for years when I served as the Pacific Citizen’s Editorial Board Chair, that Caroline Aoyagi, the executive editor who was recruited away after 15 years, and assistant editor Lynda Lin, who resigned because her husband was transferred overseas for his job, could quit at any time. They were underpaid and overworked, and had to constantly struggle with the internal politics of the parent organization, which at various times has had individuals in leadership positions who opposed the PC’s independence and cost. One wanted to turn the newspaper into a monthly newsletter. I had to fight dumb ideas like that at board meetings.

The JACL has been tough on the PC’s budget for years, shrinking the dollar spent on the paper as JACL’s membership has inexorably shrunk. JACL is the country’s oldest Asian American civil rights organization, but it hasn’t been able to recruit younger members since its heyday in the post-WWII decades.

The PC was always an easy target — it costs money to produce a newspaper, and the PC always had a big number next to it on JACL’s annual budgets. But the PC always generated a lot of its own budget through non-member subscriptions and advertising, and in recent years, an annual fundraising campaign where readers donated money earmarked soley for the PC. When that Spring Campaign started, the PC staff aimed for $10,000 for better cameras and some new computer equipment.

Over the years the Spring Campaign funded a project to digitally archive copies of the PC print editions going back to 1929, the year it began. This year, the Spring Campaign generated enough revenue to pay for a reporter — a position that JACL used to fund but cut from the budget years ago.

The PC has operated on the slimmest of staff for most of the past decade — aside from Aoyagi and Lin, and the recent addition of reporter Nalea Ko, there’s only the bueinbsee manager position, a commission-only sales person and circulation manager Eva Lau-Ting, who has been a part-time employee for 15 years.

And yet, the PC has won awards for its pan-Asian coverage, and has managed to balance its mission as a part of JACL by reporting every issue on JACL national news, and fillings its pages during and after JACL conventions. In the past few years the PC has also become adept at producing special issues that appeal to both advertisers and JACL members, like the “Extraordinary APAs Awards” issue.

Earlier this year, JACL’s national board voted to reduce the PC’s budget yet again, and eliminate starting in 2014 the position of assistant editor. There were other budget cuts, including for a regional director for the Pacific Southwest District, which shares the PC’s office space in LA’s Little Tokyo. It was only because of a large single donation by a benefactor that both those positions were restored.

But it was too late. Aoyagi had been wooed away by Southern California Edison. And Lin, who was out on maternity leave, announced suddenly that she was moving overseas because her husband had been transferred. I doubt she would have applied for Aoyagi’s position anyway, but she would have been a valuable member of a transition team. George Johnston, a columnist for the Rafu Shimpo newspaper and a onetime PC assistant editor himself, has a fulltime job as an editor for Investors Business Daily, and is not interested in running the PC, but he’s doing that in a part-time capacity on evenings and weekends until we can find a replacement for Aoyagi.

The newly-appointed PC Editorial Board Chair, Carol Kawamoto, is replacing the top two editorial positions and business manager role. I’m on the search committee. Johnston is helping too.

Despite my negative tone about Aoyagi’s struggles over the years, I think this can be a terrific position. What I wrote in the PC column is true: There’s been a big change in JACL leadership, and it’s not a given that the PC will have to fight the board at every meeting. Sure, the PC will have to justify every cent it costs the organization, but every newspaper has to justify its expenses these days, and every non-profit is struggling in the current economy.

I do think this is a great opportunity for the right person. Again, write me and I’ll be happy to send along the job announcement and the requirements (which lists salary ranges): gilasakawa@gmail.com.