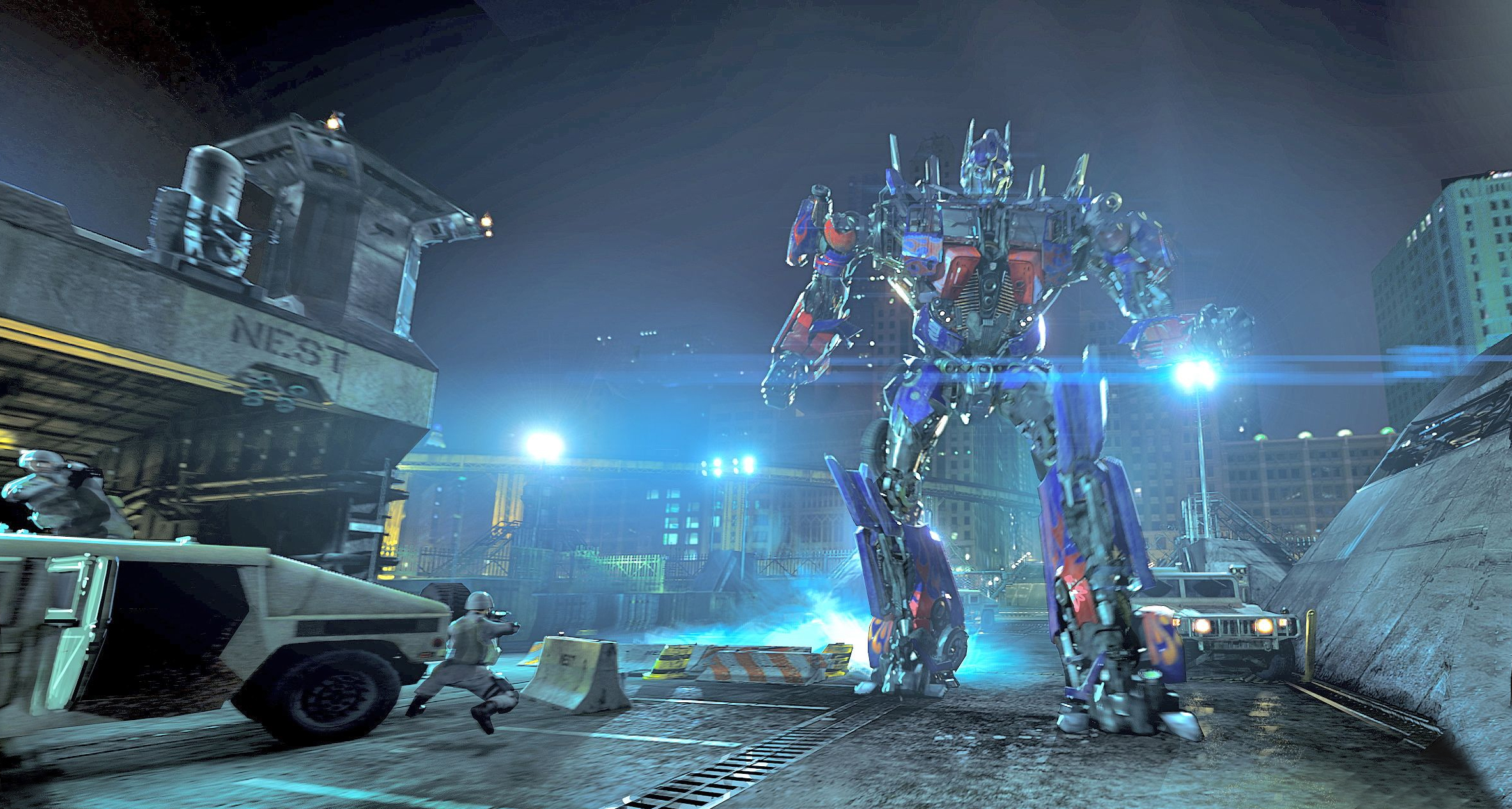 The car (which is essentially a state-of-the-art flight simulator), goes around a 60,000 square feet building along 2000 feet of track amidst 3D scenes presented on 14 different screens showing panoramic images from 34 projectors. Being immersed in the set, the 3D effects don’t stop in front of you like they would in a movie theater or on your TV at home. They wrap around you, adding to the immediacy of the experience.

Once the ride begins, you become part of the story: You hold the Allspark that controls the fate of the world, and Optimus Prime is helping you escape from Megatron’s clutches, but halfway through your group (the dozen passengers in the car) ends up fighting the Decepticons and ultimately triumphs. The car wrenches back and forth, makes crazy hard turns and tilts up and down at extreme angles, and you have no idea if you’re really traveling the distance, or if the visuals surrounding you feed your sense of navigation and trick you into feeling like you’re flying around.

The action — like the computer-generated graphics in the big-budget movies — is so realistic it’s easy to suspend your disbelief and accept that you’re really part of the story.

The ride is only six minutes long, but you come out feeling like you’ve sat through a two-hour movie extravaganza. The quality of the ride shouldn’t come as a surprise. It was created by Michael “The-King-of-Big-Loud-Blow-‘Em-Up-Movies” Bay, the films’ director, with a $40 million budget.

The line to experience Transformers The Ride 3D can be long — it was over an hour long when we were there — but it’s worth it, judging from the people who were happy to hang out. Luckily, we had the Front-of-Line pass that allowed us to skip right to the front one time, and we liked the ride so much we considered waiting to ride it again.

It helps to be familiar with the film franchise, and better yet, to like the films (they’re not exactly art cinema material, but they’re fun to watch). It also helps if you grew up with Transformers. I didn’t (I’m too old), but as a fan of Japanese pop culture, I’ve always been aware of their popularity.

Although Transformers are now a iconic Hollywood creation — the 3D ride is clearly the crown jewel of Universal Studios Hollywood’s many other attractions — its origins are across the Pacific, as a Japanese toy.

Robots and technology have always been part of the Japanese pop culture consciousness (Japan leads in robotic tech — check out the Japan Robot Association) — and robots in Japanese pop can be traced back to Tetsuwan Atomu, better known in the US as Astro Boy. Other Japanese robot in early anime of my generation included Gigantor (Tetsujin-28-Go) and 8th Man, a proto-Robocop.

In 1983, a Japanese toy manufacturer, Takara, introduced a line of robot figures that could be bent and shaped into other forms, including cars, aircraft and weapons. The American company Hasbro (makers of GI Joe) saw Takara’s toys, sold under the names Diaclone, Micro Change and Mecha at the annual Tokyo Toy Show, and inked a deal to sell them in the U.S. under the single name Transformers.

Hasbro worked with Marvel Comics, its partner on the GI Joe series of comuic books, to come up with the story of the good Autobots fighting the evil Decepticons, and launched the comic books and a cartoon TV series at the same time in 1984. An animated feature film, “Transformers: The Movie” followed in ’86. A zillion American kids in the late ’80s and ’90s grew up with Transformers as part of their consciousness.

Like all great toy franchises, the success of Transformers as a business relied on the incredible variety of pieces you could buy to populate your own personal ‘bot universe. It’s not just Barbie and Ken, it’s all the accessories that provide the profits.

Hasbro wisely introduced new characters and situations through the comics and cartoons, to keep feeding the hunger for merchandise. A second comic book series followed in the early ’90s (along with a repeat of the animated series with a fresh intro sequence) and expanded the market for the toys. Further enhancements to the story continued into the new century with comics and new toys.

The big-screen Hollywoodization of the Transformers juggernaut was inaugurated by director Bay and producer Steven Spielberg in 2007, with two sequels, “Transformers: Revenge of the Fallen,” and “Transformers: Dark of the Moon” coming out in the years since, all starring Shia LaBeouf. They’re huge-budget special effects extravaganzas, and it’s easy to see how they can be adapted to the 3D ride at Universal Studios, though it’s hard to wrap your brain around how complex it must have been to actually create the ride.

We checked out other attractions that afternoon that are based on hit movie franchises, like the Mummy (too short, some scary moments but overall ho-hum), Jurassic Park (fun getting wet riding down the waterfall, but much of the ride was slow-floating and kinda dull, plus the animatronic dinosaurs were… old fashioned) and Terminator (featuring live actors playing Arnold Schwarzenegger and Linda Hamilton’s parts, it was an early attempt to be immersive but not very convincing). The only ride that we enjoyed almost as much as Transformers was the famous Studio Tour, which covers the history of the movie studios, shows off cool sets and behind-the-scenes stuff, puts bus riders in a couple of special-effects showcases and lasts an hour.

If you’re in LA, and want to be a tourist, visit Universal Studios. Give yourself an entire day, and get in line for Transformers: The Ride-3D. It’s worth the wait.

The entire Transformers phenomenon is a global American cultural explosion, but I still like to think of the roots of the megalith: Cool little Japanese robot figurines that bent and folded into something else.

Here’s the trailer for Transformers: The Ride-3D:

And here’s a “Making of” video:

And in case you haven’t been paying attention to the Transformers movies, here are the three trailers: