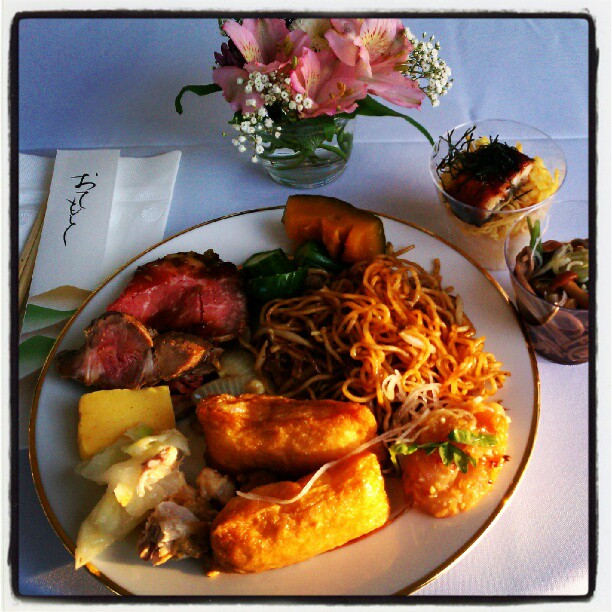 The invited audience enjoyed a dinner buffet after the concert, of traditional dishes served up by the Onos’ private chef.

The Onos have hosted a series of events in their official residence, and in venues throughout the area since their arrival almost a year ago. Of the Consul Generals that have been assigned to Denver (covering Colorado, Wyoming, Utah and New Mexico) since the Japanese consulate in Denver was established in 1999, Ono has been the most pro-active in reaching out to the Japanese American community, and emphasizing cultural events.

His staff asked attendees to fill out a survey at the end of the evening which sought input on what kinds of performances and presentations we would like to see organized the Consulate. I always enjoy traditional Japanese cultural performances, but I noted in my survey that it would be great to also bring in contemporary Japanese culture, from J-pop music to anime programs. (The Consulate is already co-sponsoring a series of classic Japanese films from the 1930s to contemporary movies, with free admission as part of the International Film Series at CU-Boulder’s Muenzonger Auditorium; the first in the series is a Sept. 23 4 pm screening of the 1935 samurai film, “Sanzen Tange and the Post Worth a Million Ryo.”)

The Consul General has made the effort to confer awards from the Japanese government honoring people in Denver who contribute to greater understanding or business relationships between Colorado and Japan. This year, the Consulate has been involved in a number of public events marking the Cherry Blossom Centenary, including planting dozens of new cherry trees in Denver (a park in Green Valley Ranch, the Denver Botanic Hardens and of course our own “tiny Tokyo,” Sakura Square) as well as in Boulder, Colorado Springs and elsewhere.

The Consulate has also been tasked with the various humanitarian relationships that were established after the March 11, 2011 earthquake and tsunami that devastated northeast Japan. A couple of delegations have visited to thank Coloradans for their generosity with aid, and the Consulate hosted an anniversary memorial with a taiko drum group from the Tohoku region. Relationships continue between the region and Colorado, with the Consulate’s help.

The announcement of next year’s direct flights by United Airlines between DIA and Narita-Tokyo promises much more engagement between Colorado and Japan; I wouldn’t be surprised if the Consulate keeps establishing a higher profile in the months to come.