The app has all the action and coolness quotient of manga, but has an added educational bonus: It helps teach Mandarin. As you read the story, you can either read the dialogue bubbles in English or switch to Chinese, and hear the dialogue with a touch.

I invited the couple to be panelists on the comics panel at the V3con for Asian American Digital Media this past August, and they were great. 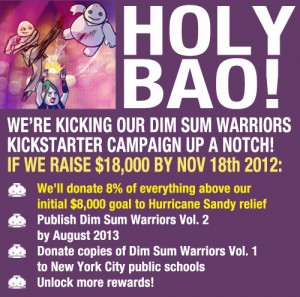 The two are immigrants from Singapore, where they founded a hit satire site TalkingCock.com, “exercising free speech in Singapore since 2000.” Yen Yen is now an associate professor at the College of Education and Information Sciences at Long Island University, C.W. Post. Colin is a recovering attorney who’s followed his passion for drawing comics. The couple now run Yumcha Studios in Flushing, New York.

They’ve been raising money through a Kickstarter project to pay for a print version of “Dim Sum Warriors Vol. 1,” which will be published as a 144-page, full-color bound graphic novel. The Kickstarter campaign’s been a success. Frankly, the $8,000 goal is just about reached with 11 days to go (as of today).

So Woo and Goh have upped the ante, thanks to a push from Hurricane Sandy, which luckily spared their part of the New York metro area: If they can raise another $10,000 and reach $18,000 in donations by the project’s Nov. 18 end date, they’ll donate 8% of everything above $8,000 to Sandy relief efforts, and promise to publish Vol. 2 of Dim Sum Warriors by next August and donate copies of Vol. 1 to New York City public schools.

That sounds like a fine reason to give a few bucks of support. The Kickstarter page is here, and you can read all about Dim Sum Warriors on the couple’s Yumcha Studios website. If you want to download the app, it’s available here on the iTunes App Store.