21 Dec Japanese Americans, Chinese food and our sense of community 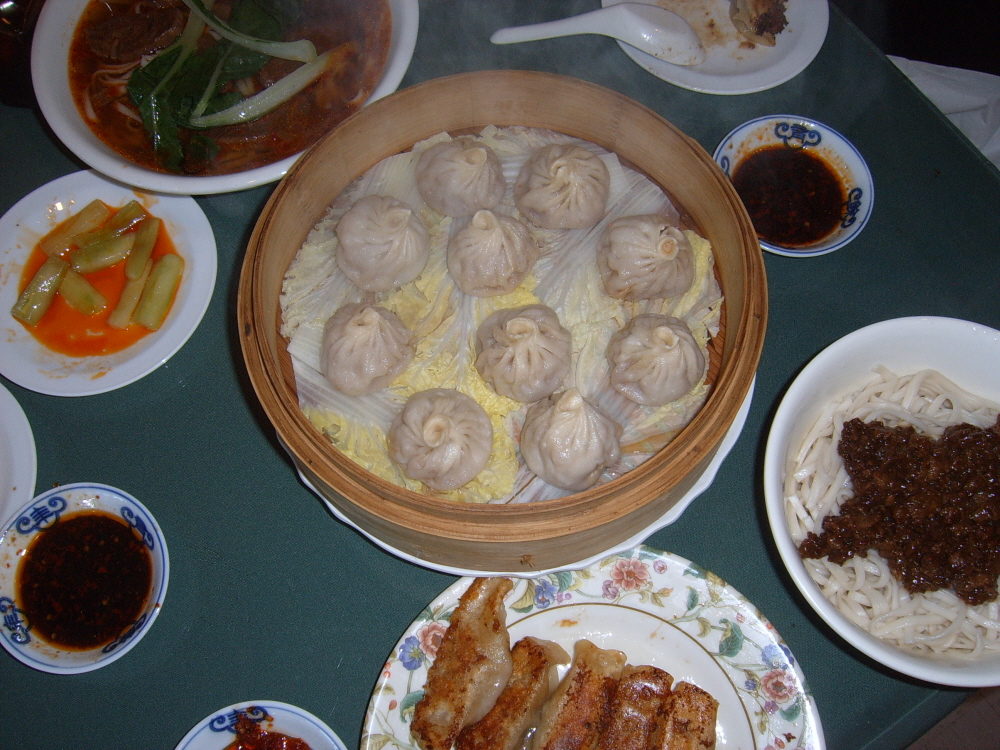 Mmmmm. Chinese food. Just thinking about Lao Wang Noodle House in Denver, which I swear serves the best dumplings in the universe (it’s where the photo above was taken) gets my mouth watering. It’s a tiny hole-in-the-wall tucked into a tiny strip mall along the South Federal Asian strip of mostly Vietnamese eateries. It’s run by an elderly couple who can be cranky (“We’re closed,” we were told gruffly on one visit even though they were supposed to be open another hour) but who hand-make dumplings that are to die for. The food is authentic, and no-frills, like the service.

But we also love American Chinese food. One of our favorites is the suburban Arvada restaurant Tea Garden. There are also some terrific eateries that serve authentic Chinese cuisine, like you might get in China: China Gourmet in Boulder and the larger, fancier Spice China in Superior are operated by the same family.

As author Jennifer 8 Lee states in her excellent history of American Chinese food (and the origins of the fortune cookie), “Fortune Cookie Chronicles,” there are more Chinese restaurants in the United States than the three biggest fast-food burger joints combined. Chinese food, she suggests, is as American as apple pie.

Chinese food is also a huge, delicious presence in Japanese American communities. Most of us have grown up having big parties and banquets and family reunions at local Chinese restaurants. The cuisine of choice to mark our lives’ milestones is Chinese. And many of us dine at Chinese restaurants after funerals and memorial services, where the food comforts the living as we celebrate the lives and impact of the deceased.

Chinese restaurants are also the hubs for pan-Asian community celebrations. Every year from January through March, depending on when the new year falls, it seems we eat at Chinese restaurants every weekend for some organization’s annual New Year banquets, not just Japanese or Japanese American groups like JACL or Japanese American Association of Colorado, but also OCA, Asian Pacific Development Center and others. Here in Denver, we can end up at the same great restaurant, Palace, three or four times in a month. Other popular banquet spots include Empress Seafood and Kingsland (both are popular dim sum spots year-round). Back in the day, the local Japanese community loved to eat at a place now long-gone called the Lotus Room, which served Shrimp with Lobster Sauce that’s still fondly remembered today.

One reason Chinese restaurants are so popular for special occasions is that many are designed to accommodate banquets and other large gatherings. They’re huge, or have sections that can be closed off for a private event.

Chinese food is the preferred cuisine for community gatherings because it can be prepared relatively quickly, and cost-efficiently. A sushi restaurant just isn’t going to work well if 150 people are ready to eat at once. The iconic Chinese rotating “lazy Susan” is also ideal for seating a group at a large round table.

The history of Chinese food in America is fascinating (read Lee’s book!), because it began as food for sojourners from China who came the the US as miners and laborers for the gold rush and later, railroad building. The food was a lifeline of culture to the immigrants homeland. But as necessity forced invention and dishes such as “Chop Suey,” a melange of whatever was available, tossed and cooked together as comfort food not just for Chinese workers but others too.

And, as Lee explains, the iconic Fortune Cookie of Chinese restaurants isn’t Chinese at all. Restaurants in China don’t serve them — they’re purely an American invention. Or actually, a Japanese invention, with roots back to temple biscuits in Kyoto. But a Japanese American confectioner in Los Angeles’ Little Tokyo created the smaller, US version that caught on in the early 20th century as an after-meal bonus at Chinese restaurants. When Japanese Americans were sent off to concentration camps during WWII, Chinese manufacturers sprang up to continue producing the cookies.

So Japanese Americans and Chinese food go way back.

I’ll be writing a chapter about Chinese food in the JA community in an upcoming book about Chinese restaurants. I’d love to hear your stories about growing up in Japanese or Japanese American communities, and the importance of Chinese cuisine to you and your family. You can comment on Facebook, or down below on this blog post, or just send me an email to gil@gillers.com. Thanks!