Gil Asakawa's Nikkei View | When I dream of sushi, I don’t dream of “Jiro Dreams of Sushi”
4906
post-template-default,single,single-post,postid-4906,single-format-standard,qode-quick-links-1.0,ajax_fade,page_not_loaded,,qode-title-hidden,qode-theme-ver-11.0,qode-theme-bridge,wpb-js-composer js-comp-ver-5.1.1,vc_responsive

10 Jan When I dream of sushi, I don’t dream of “Jiro Dreams of Sushi” 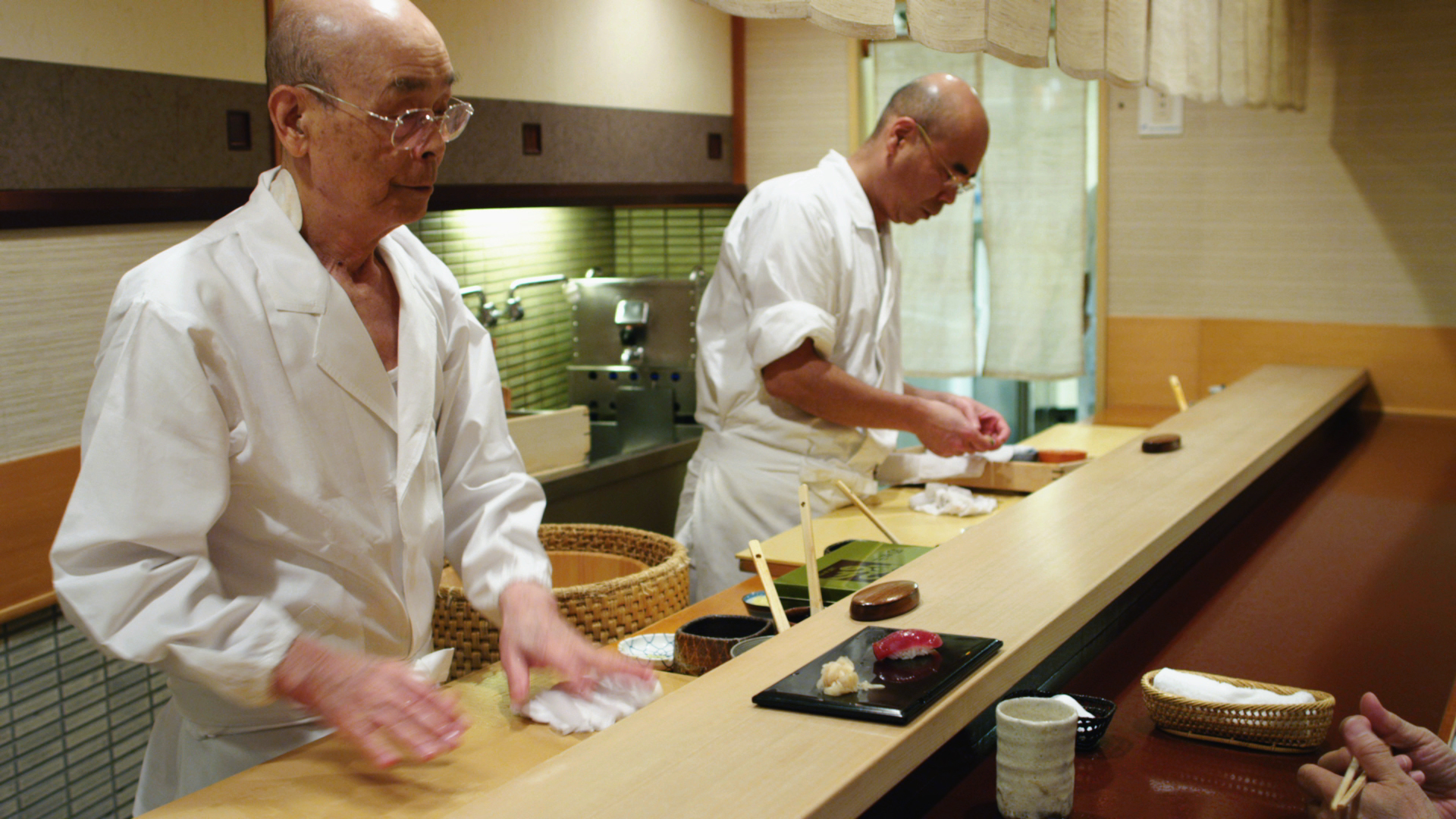 The film is also arty and deliberate in its pacing, with the telling modernist repetition of composer Philip Glass making up much of the soundtrack music. The documentary reveals the daily workings of the small restaurant and its autocratic owner Jiro and his aging son Yoshikazu who is waiting to take over when his father retires (and the younger son Takashi, who escaped to operate his own restaurant in the hip Roppongi district of the city).

“Jiro Dreams of Sushi” also comments towards the end on the overfishing of tuna for sushi, with Jiro giving historical context about how when he was younger there was never a shortage of maguro (tuna) and he could go to the market and ask for the best fish daily. Given the news just last week of the record $1.76 million price paid by a Tokyo restaurant for one bluefin tuna, I wonder how much longer tuna, the most popular fish for sashimi and sushi, will be on typical menus.

In the end, I enjoyed the movie but thought it was too long, and too reverential about Jiro. There were several points where the film could have wrapped up, but it returned to old themes, or went off on new topics.

One thread was a reunion with Jiro and his son to Hamamatsu, his hometown. He meets childhood friends who acknowledge that he was bully before and during the war years of the 1930s and ’40s. The segment also shows his callousness toward his parents and ancestors, when his and Yoshikazu visit the cemetery where they’re buried. Jiro comments snarkily, why should he care about his parents when they didn’t care about him?

It’s old-school Japanese tough love, and he’s passing it on in a way to his eldest son, who jokes earlier in the film about how he’s getting old himself, yet he’s still perceived as the assistant to the master. In fact, it turns out that the Michelin reviewer who was so taken with the restaurant was never served by Jiro, but instead by Yoshikazu.

You get the feeling that Jiro, as great a chef as he is, is also a difficult person. Maybe that’s a trait of world-class artists. In the droll but accurate words of punk-era songwriter Jonathan Richmond, “Pablo Picasso was an asshole.”

So it’s hard for me to care that much about Jiro. He’s a cute old man but I see enormous ego and even vindictiveness in him, which the filmmaker seems to have been blind to, or too timid to pull into the narrative. The narrative that we’re given is the masterful artist who lives for sushi and is still at it as an octogenarian, receiving unquestioning kudos from critics both at home and abroad.

My problem with that: The sushi that’s shown in the film is of such a rarified breed that it may as well be alien food from another planet. A meal at Jiro’s counter costs $300 for 20 pieces that he serves in an artsy order, from the most common fish to the more exotic. The place is small but always full — there’s a month-and-a-half waiting list for reservations.

OK, so it’s not too rarified for his customers. But for me, it’s something I’ll probably never experience.

The dichotomy presented in the film is sushi’s origins and its current popularity, contrasted with his precious cuisine. It began as street food, the documentary explains early on.

But today, Jiro’s sushi stands out, price- and quality-wise precisely because sushi has once again become street food. It’s available everywhere (even in the U.S., many cities seem to have sprouted as many sushi bars as Starbucks). In Japan, you can buy pretty good sushi (I think) on the run at convenience stores like 7-Eleven and Lawson’s. In the U.S., some form of sushi is often available in grocery stores and supermarkets. 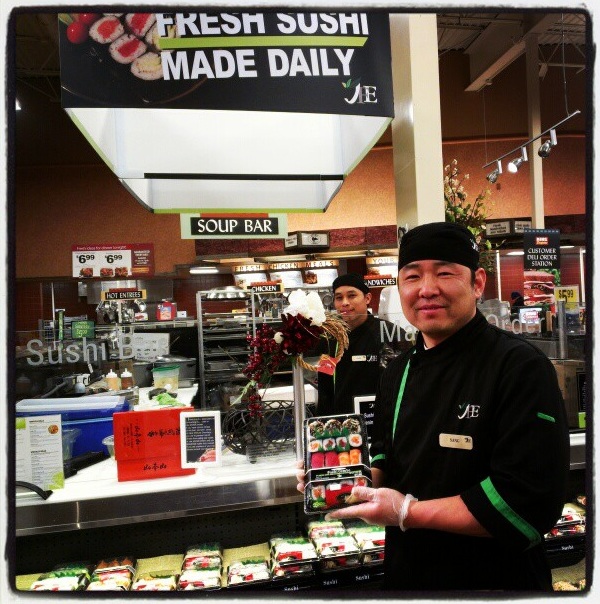 Every time I shop at my King Soopers supermarket, I stop and say “hi” to Sang Kang, the Korean man who bought the franchise to make sushi in the store. Every day he gives away a lot of what he calls a “Crunchy Roll” — a sloppy mix of sushi rice, crab, mayo and other ingredients topped off with fried onion bits from a can — as free samples to shoppers. It’s tasty, though Jiro would probably have a heart attack if he saw it sold as a kind of sushi. I’m sure Jiro also disapproves of “California Rolls” with rice on the outside and fake crab inside, and any sushi that includes avocado — things that are pure American inventions (though they’ve now caught on in Japan too).

The thing is, for most Japanese Americans, sushi for many years wasn’t something that’s available all over town. It was available at the fancy expensive Japanese restaurants, which also served sashimi, the raw fish served in slices. In fact, for decades Denver only had a couple of high-end Japanese restaurants that served sushi. Sushi and sashimi were for special occasions, or for family feasts during New Years and other holidays. Even in Japan when I was a kid, my family would only go out to fancy sushi restaurants for special occasions.

More often, the sushi we had was “maki-zushi” or “futomaki,” literally translated as “rolled sushi” or “fat rolls” of vinegared sushi rice filled with a handful of ingredients (but not sashimi, or raw fish) and rolled up in nori (seaweed). It turns out futomaki is what most Japanese Americans thought of as sushi too, because it’s more a working-class type of comfort food. “Nigiri-zushi,” the kind of sushi that has a piece of sashimi sitting atop a carefully formed oval ball of sushi rice, was special.

Either way, eating sushi growing up once we moved to the States was not a common occurrence. With sushi restaurants so rare, and Japanese culture so exotic, non-Japanese would recoil in horror at the thought of me enjoying a slice of raw fish on anything. It was well into the 1980s and even 1990s before sushi caught on with non-Japanese young upwardly-mobile hipsters. For them, eating sushi became a badge of their worldliness (and I suppose, their affluence).

Now, I know that there’s good sushi and bad sushi, and I’ve had awful sushi. It’s a crying shame when the rice is hard and undercooked, or mushy and overcooked, or has no trace of the sweet vinegary taste of proper sushi rice, or the nori is so tough you can’t bite through it, or the fish isn’t fresh and tastes fishy. For that reason, I usually avoid supermarket sushi (except for Kang’s in my supermarket — he even makes perfect brown rice inarizushi on request), and I get picky about who the sushi chefs are. Call me racist, but the best sushi I’ve had was made by Japanese or Korean chefs. When I enter a popular sushi joint and five white chefs beam out from the behind the bar and don’t yell the requisite “irasshai!” to welcome me, I assume I’m going to have a sub-par experience.

But I’ve had lots of good sushi too, definitely in Japan but also here in Denver. My mom is a snob for Japanese food and we agree that Sushi Den is the best in town. I also like Sushi Zanmai in Boulder.

Other great sushi bars have come and gone: Pelican Pete’s American seafood restaurant in Boulder in the 1970s had a terrific tiny sushi bar operated by a Japanese chef (don’t know here he went) who used to spoil my family and give us a bunch of sushi and only charged a fraction because he liked my dad; Sushi Heights on East Colfax is gone now, but its owner and chef, Kenji Yujiri, is now quietly running the sushi bar at Sushi Den.

I love dining out at Japanese restaurants. But when I do, I rarely go for sushi, while for many non-Japanese these days, sushi is synonymous with Japanese food. I know people who go out and have sushi a couple times a week for lunch. Not me — sushi for me is still for special occasions. I’d rather enjoy a bowl of ramen, or curry rice, or yakiniku beef, or tonkatsu breaded pork cutlet.

It’s hard to imagine what special occasion would allow for me to dine at Jiro’s place in Tokyo, and cough up $300 for a meal.

Here’s the trailer for “Jiro Dreams of Sushi”: