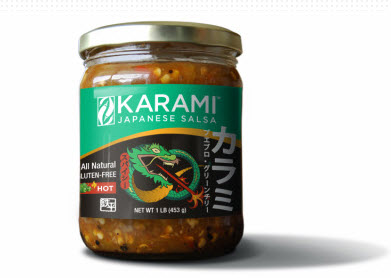 What makes it Japanese American, not Japanese?

According to Karami’s history, the salsa was first made as a side dish in the 1890s, when Japanese arrived in Colorado from the West coast to pursue jobs on railroads and settled on farms. As the men who came first brought wives and started families, the adapted recipes to available ingredients in our landlocked state.

So in southern Colorado when they began making vegetable side dishes, instead of seaweed which was a wistful memory of life along the Pacific Ocean, they experimented with various ingredients until they tried Pueblo’s famous green chile. The roasted chile added the right texture of wakame seaweed, but when mixed with soy sauce and sugar, gave a nice kick and the hard-to-describe umami to vegetables.

So Japanese Americans raised in Colorado since then have had the familiar flavor of this treat served on their tables. If your family is from California (and arrived in Colorado after the WWII internment camps) or you live along the West Coast now, Karami may be a novel flavor. Jason Takaki’s family has lived in Pueblo for generations (his father was mayor of Pueblo in the 1970s, and I’ve written before about his sister Jennifer, a filmmaker), and he’s the one who introduced Kei Izawa to the recipe for Karami.

I found the taste very familiar, though as a side dish, not a salsa. Erin’s family loved it when I had them try it at a recent barbecue, even though they had never quite had the mix of sweet and spicy served this way.

But I just had lunch with a Japanese American whose family has lived in northern Colorado’s farm country for generations, and she knew immediately what I was describing. She said her grandmother could probably cook up some green chile into something like Karami right now, because she made a dish with green chiles, sugar, soy sauce and vegetables.

I love the flavor of Karami, but I also love the story behind it. It’s a true Japanese American invention, adapted out of necessity from traditional recipes. And to think it’s now available in natural food shops, it’s like the spirit of those initial settlers has ended its journey in a big virtuous circle.

Karami is even healthy: it’s made in Pueblo with organic vegetables and chiles, gluten-free soy sauce and blue agave as sweetener instead of sugar. That’s why it’s making its debut at Alfalfa’s.

Look for Kei introducing Karami at Alfalfa’s in Boulder April 20-21. It’ll also be available at Pacific Mercantile in Denver as well as Whole Foods and other grocers and supermarkets in short order. And those of you on the West Coast, watch for it to eventually arrive on shelves in your Japanese markets.

Who knows, Karami might make its way to its roots and emigrate back to Japan some day!

As for your bottle of Pace Picante, put it at the back of your fridge for when you serve a traditional Mexican dish. Otherwise, Karami adds a fusion flair that’s a lot more interesting. Like I said, Forget New York City, forget San Antonio. Say “hi” to Pueblo, Colorado.