That’s why I write about these issues over and over.

Just because we have a black man in the White House doesn’t mean we’re in a “post-racial America,” whatever that entails. I believe we still need to work, and work hard, at making sure all people are accepted as equals.

I have friends who think I’m thin-skinned and some who think I’m too much the P.C. police. One Italian American friend who I respect very much whose family immigrated to the United States pointed out on a Facebook exchange a couple months back, that he has seen his culture denigrated all his life, and Mafioso stereotypes continue to flourish today. But he thinks I should ignore the insults and move on like he has.

I pick and choose the things I write about…. and I think Asians are in a little different situation because unlike many European Americans (you’re right, that’s generally a better term than “white”) because with the main exception of Hispanics, many people of European heritage can assimilate into mainstream American society, but Asians, like African Americans and Hispanics, will always look different and be “the other.”

It’s definitely true that each wave of immigrants to the U.S. has suffered prejudice — the Irish in the mid-1800s were treated only a step above Asians and African Americans. In fact Irish men were only allowed to marry Asian or black or Hispanic women (Irish women weren’t allowed to immigrate here at the time). Joe DiMaggio was spit on and had epithets yelled at him for being Italian when he started his major league career.

Racial issues affect everyone, and I think it’s up to each of us to decide how much or how little to put up with. I’m sure there are organizations and individuals who are upset by the portrayals of Italian Americans (in fact I know there are, because there have been protests of mafia portrayals and shows like “Jersey Shore”).

In the past decade, I’ve become much more aware of how much Asians have to put up with, and since I have an outlet, I feel it’s my responsibility to be one of the people online who cover these issues on behalf of Asian Americans who are bothered by the stereotypes but don’t have a voice…. Hmm, maybe I should post this on the blog as a statement of purpose….

I pick and choose. I’d go crazy if I wrote about everything that makes me angry. Actually, these days I use the same weapon of mass communication the haters do — social media — to comment on a lot of things that I don’t take the time to blog about here on Nikkei View.

I certainly don’t sympathize with Deen, but if she used the word decades ago, as she claims, then that was a reflection of the times she — and I — lived in. I spent part of my childhood in the South, and racial issues were much more direct then. Ishmael Reed in the Wall Street Journal wrote a thoughtful and thought-provoking commentary on Deen’s plight, and how the (mostly Caucasian) mainstream media are piling on because she’s an easy target when they should be looking at themselves. We all have an “inner Archie Bunker,” he points out, and crucifying Deen for her historical trespasses might not help us exorcise that part of ourselves.

I’m a student of history. Some might say I live in the past. Yet, I don’t feel particularly angry that Asians were targets of racism in the ’60s when I was a kid, or the entire history of Asians in America from the 1800s right up through and after the imprisonment of Japanese Americans during World War II.

I write about these injustices and don’t want anyone to forget they happened. But I’m not pissed off about the past the way I get when idiots spout racist stuff TODAY after an earthquake and tsunami that kills more than 15,000 people, or after a plane crash.

That’s why I’m a lot angrier about the racist and homophobic prattle that comes out of the contestants on the reality show “Big Brother” than I am about Paula Deen. These dummies are spouting offensive stuff today, and can’t lean on the defense that they said it five decades ago. I’m glad the show’s ratings have gone down the toilet, and hope CBS will just cancel it as an embarrassment that brings out the worst in the contestants. I’m also glad to know that two of the contestants have already been dropped by their modeling and acting agencies, but they don’t know it because they’re sequestered for the duration of the show. I’d love to see a video of their faces when they leave the program and find out they’ve screwed themselves by showing their “true colors.” Julie Chen, who hosts the show and is a respected Asian American TV journalist, is probably ashamed to be linked to “Big Brother” at all. The conversations at home with her husband Les Moonves, who happens to the the President and CEO of CBS, must be aaawkward.

Another issue that I passed along via social media but didn’t blog about (I guess I’ll do it here) was the use of “Jap” by a Las Vegas celebrity food writer, John Curtas, in a post last fall. He used “Jap” as an abbreviation in Twitter, where it’s common to abbreviate as many words as possible to stay under the 140-character limit. He apparently prefers to use “Jap” even though most media have long ago switched to “JPN” (CNN and other major media made the change during the 2004 Olympics). Curtas decided to jump on the anti-Deen bandwagon for using the “N” word but a Japanese American blogger called Curtas out on his use of “Jap.”

I thought Gann Matsuda, the JA blogger was right to call Curtas out, but he demanded a public apology to all Japanese Americans and that made Curtas defensive — and unpleasantly so. If anything I found Curtas offensive for how he reacted, when he could have simply taken the confrontation as a teaching moment and agreed to use “JPN” from now on. Even Matsuda noted that he didn’t think Curtas meant to offend or be racist. But now, the writer (who’s a lawyer by day, and popular enough with his food blog that he was a judge on a recent episode of “Iron Chef America” — another layer of irony), probably will stick to his offensive and uneducated use of a no-longer acceptable abbreviation.

Blogging can be a weird outlet. Sometimes, I do make much ado of nothing, because I think something is worth pointing out to a wide readership. But many times I do let things pass by — my Italian American friend would probably be happy to know how many incidents I let go without posting a diatribe.

But whenever the racist trolls crawl out from under their rocks to vent their idiotic narrow worldview after a tragic event, I’ll continue to react.

After all, for it to be a teaching moment, someone has to call class to order.

UPDATES: I wanted to add links to a couple of things related to stuff I wrote about above.

First, Julie Chen, the journalist and host of “Big Brother,” has commented on the racist statements made by contestants on the show, especially the anti-Asian ones.

The denouement for this saga will be when the contestants come out of their sequestered cohabitation and return to the here and now of the real world (no MTV pun intended). I hope someone’s there to capture their reactions when they learn the things they’ve said cost them their jobs. 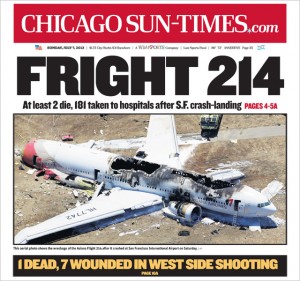 Second, the Asiana plane crash was covered in the Chicago Sun-Times witha banner headline across its front page (shown here) that made a pun on “flight” that many took to be a racist stereotype of Asian accents. I grew up with white people squinting at me, baring their buck teeth, bowing and saying “”haro!” so I saw the headline and winced.

I don’t think it was meant to be racist, nor a light-hearted attempt at punny humor. Not even the most jaded daily newspaper headline writer would stoop so low in a story about a tragedy, though lord knows I’ve slapped some bad puns on stories in my career. But I do think that the headline was in extreme poor taste and someone in the newsroom should have caught it before it was published because of the potential for it to be seen as a racial comment.

It just shows how mainstream news media are not diverse enough. I would hope that if an Asian American served in a management position (a section editor, managing editor, hell, even a section copy-editor, the front line of headline writing), surely the headline would have been changed in time.

Am I being a political correctness cop? Yeah, and I think it’s warranted here. Sun-Times editor Jim Kirk has spent the past few days apologizing, and conservative media types are starting to defend the headline and trying to squash what they see as the latest salvo in a war to tamp down on freedom of speech over harmless, innocent words.

They may have been written innocently, but my stomach told me the headline was a poor choice.