There’s an embarrassingly small library of fiction books and feature films, about the Japanese internment during World War II. The humiliating experience of 110,000 people of Japanese descent carted away from the West Coast and into hastily built concentration camps is still under-represented in American pop culture.

Classics like “Farewell to Manzanar” (in both book and film form) can be hard to find, and better-known Hollywood productions such as “Snow Falling on Cedars” (again, on both the page and screen) can be hits but are fleeting. One of my favorite indie feature films about the era, “Come See the Paradise” starring Tamlyn Tomita and Dennis Quaid, is little-remembered and deserves much wider acclaim.

There are still many stories left to tell about Japanese Americans and their time in concentration camps during WWII.

So it’s cool to see a young filmmaker using the contemporary tools of social media and “crowdfunding” (asking the public to donate money) to bring his original JA story to life. And, it’s even cooler to see that Chris K.T. Bright’s project, “Tsuru” has caught the attention and gained the support of enough people that its Kickstarter fundraising campaign reached its initial goal of $15,000 in a mere three-and-a-half-days. Kickstarter gives the money to a project only if it meets its goal; if the campaign fails, every donor gets her money back.

Now, Bright and his crew are hoping to keep raising money to reach their “Stretch Goals” in the month remaining in the campaign. 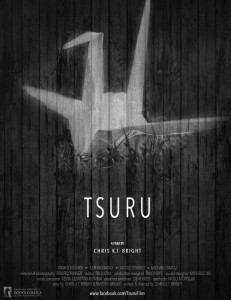 “Tsuru” is a unique take on the internment story. Unlike films like “Come See the Paradise” or “Snow Falling on Cedars,” it’s not about a mixed-race couple’s challenges of being in love during a time of turmoil. And unlike the venerable “Farewell to Manzanar” (Jeanne Wakatsuki Houston’s book was published in 1973; the TV movie was broadcast in 1976), “Tsuru” doesn’t dwell on the dynamics of how the turmoil affects an entire family.

Instead, the script written by Bright and his brother Timothy Bright (who are hapa, born in Hawaii) zooms in on a microcosm of a narrative that hasn’t yet been told: An elderly couple are hiding in an abandoned desert shack to avoid evacuation from Los Angeles to prison camps, but the husband is ill, and the two are sustained by a Caucasian nurse who sympathizes with their plight and brings them food and takes care of them. The authorities, of course, realize the couple is missing when they start rounding up all their neighbors.

It sounds like a setup for a tense but touching story arc, and I’m looking forward to seeing the completed film, which will clock in at between 15 and 20 minutes. The film, which will be shot in retro black-and-white, is Chris Bright’s film school senior project at Chapman University’s film school in Orange, California (as in Orange County), south of LA.

He’s assembled an impressive cast including Takayo Fischer (who is herself a survivor of wartime camps in Arkansas), Ken Takemoto, Nicole Starrett and Michael Tomsu.

Bright planned on spending $23,000 to produce the film, and aimed for $15,000 to come from Kickstarter. Now that he’s made that nut, he’s hoping supporters will be able to help him to get to the next few plateaus, which will help him get better period props and costumes, better studio equipment for the musical soundtrack, and funding so the film can be sent around to film festivals after it’s completed.

Let’s help this young energetic filmmaker bring his vision to life, and get him to his stretch goals. He has a month to do it, but he needs our support. Donate here on Kickstarter.

We need more stories in our Japanese American library, and “Tsuru” promises to be a good one.