Gil Asakawa's Nikkei View | This powerful short documentary about caregiving needs to be seen by every Asian American
5655
post-template-default,single,single-post,postid-5655,single-format-standard,qode-quick-links-1.0,ajax_fade,page_not_loaded,,qode-title-hidden,qode-theme-ver-11.0,qode-theme-bridge,wpb-js-composer js-comp-ver-5.1.1,vc_responsive

They should, though. It’s a pretty huge, pretty amazing organization, and since as of this year, every Baby Boomer (the boom ran from 1946-1964) is 50+, it’s an organization that’s not just for “seniors” or “elderly.”

I’m a bit biased. Since this spring I’ve been working for AARP, as a Social Media Fellow on the Multicultural Markets and Engagement team aimed at Asian Americans. Since the spring, I’ve managed the AARP/AAPI Twitter account and AARP AAPI Community Facebook Page, and written several stories for the AARP.org website. But in all honesty, before I got the gig I didn’t know much about the great stuff AARP does outside of its magazine and discounts for members.

Yes, there are discounts, on all sort of stuff from coupons to amazing travel deals. And also deals on health insurance and other health and financial services. But AARP also offers helpful services and information about filling out your taxes, and driver safety courses, and fights at every government level from local to national on behalf of people who are 50 and older. They also offer TEK (Technology, Education and Knowledge) workshops to train 50+ people on how to use technology — I’ve sat in on sessions with Tagalog and Chinese interpreters to help older Filipinos ad Chinese get comfortable tiwht mobiles and learn how to text and shoot selfies. You should see their faces when they accomplish these tasks!

And, AARP produces a lot of media, from AARP The Magazine and Bulletin publications, to its huge AARP.org website, lots of social media and TV and web content.

The nine-minute documentary above, “Caregiving Dahil Mahal Kita (Because I Love You),” is produced by AARP, and it’s an example of the great work AARP produces, and how the organization is focused on outreach to the Asian American Pacific Islander community.

The video’s a powerful tool to start conversations among families, between generations, about a really important topic that — especially in Asian and Asian American families — often remains unspoken, out of shame and embarrassment.

These issues of how we take care of our elders, and more important, how we plan for this care, are often left unplanned until it’s too late.

Luckily for my family, when my father died of cancer 20 years ago, he was diagnosed and then gone in less than a year, and he never spent any time in long-term care. He was home until the day he passed away, when he was taken to the hospital by ambulance. For most of that time he took himself to the VA hospital for care, and he went out for sushi with my mom the night before he died.

I’m not sure how we would have dealt with a prolonged illness, because we’d never talked about or prepared for any such possibility.

In a reception at the San Diego AARP Member Event that followed the premier screening of “Caregiving Dahil Mahal Kita (Because I Love You),” there was an emotional Q&A session with General Anthony Taguba and Leo Duran, two of the three people interviewed in the documentary. The audience, which was a mix of AAPI and non-Asians, was deeply moved by the film and the most important point that came out of the discussion was that families need to have the difficult conversations about caregiving now, before it’s too late.

How will you pay for the care? Who will be the primary caretakers? Can the family realistically manage the caretaking duties or will an outside caretaker need to be hired? Are there medical instructions regarding Do not Resuscitate (DNR) requests? Is the caregiving in-house, in an facility, or long-distance (Leo Duran uses the Internet to stay in touch with his mother in the Philippines)?

These questions are important across AAPI communities. The fact is, Asian Americans are caregivers for their families more than any other ethnic group. Because of our cultural values, even when we’re generations removed from our Asian roots, we invite our elders to live with us: 17% of AAPI households include multiple generations (23% in the Filipino community — Source: 2012 ACS PUMS. Prepared by AARP Research Center).

We’re raised with these expectations. According to one study, 73% of Asian Americans feel children in the family should care for elderly parents (compared to 49% of others of the same age), and 72% express guilt for not providing more care to elders (compared to 48% of others the same age). In addition, 38% of AAPIs age 45-55 expect their kids to take care of them when they’re elderly, while only 22% of people overall who are between 45-55 have the same expectation. (Source: Belden, Russonello & Stewart and Research/Strategy/Management [2001], “In the Middle: A Report on Multicultural Boomers Coping With Family and Aging Issue” via AARP Research.)

So as Asian Americans, we have more pressure to undertake the task of caregiving. That’s all the more reason to start the conversations now. Show your parents or grandparents, or your children, the documentary. And then talk. 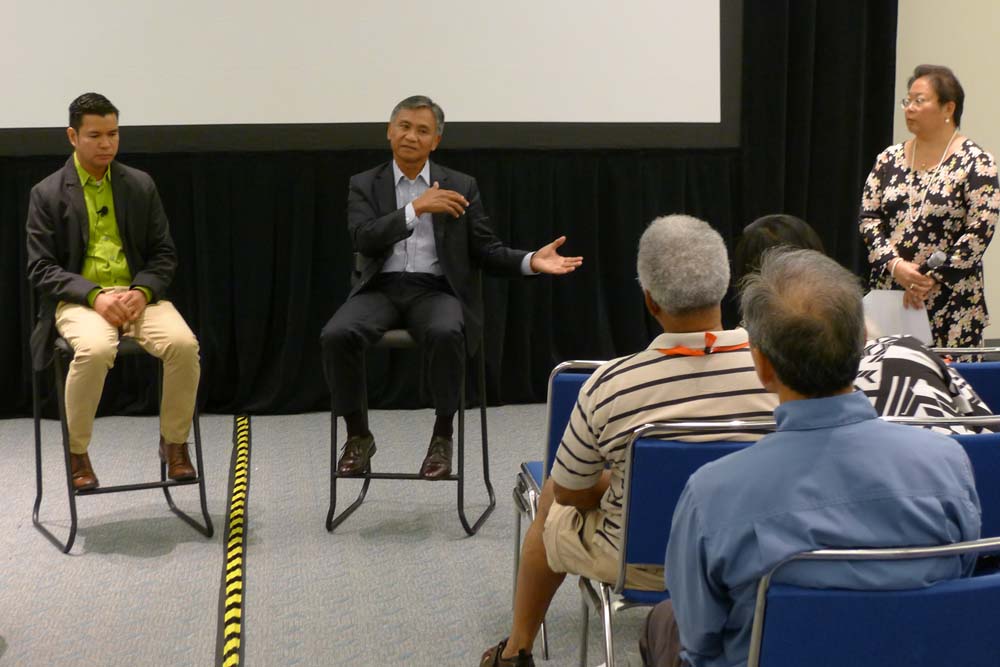 Leo Duran (from left), Gen. Anthony Taguba and Daphne Kwok, AARP VP of Multicultural Markets and Engagement, field questions from the audience following the screening of the documentary. 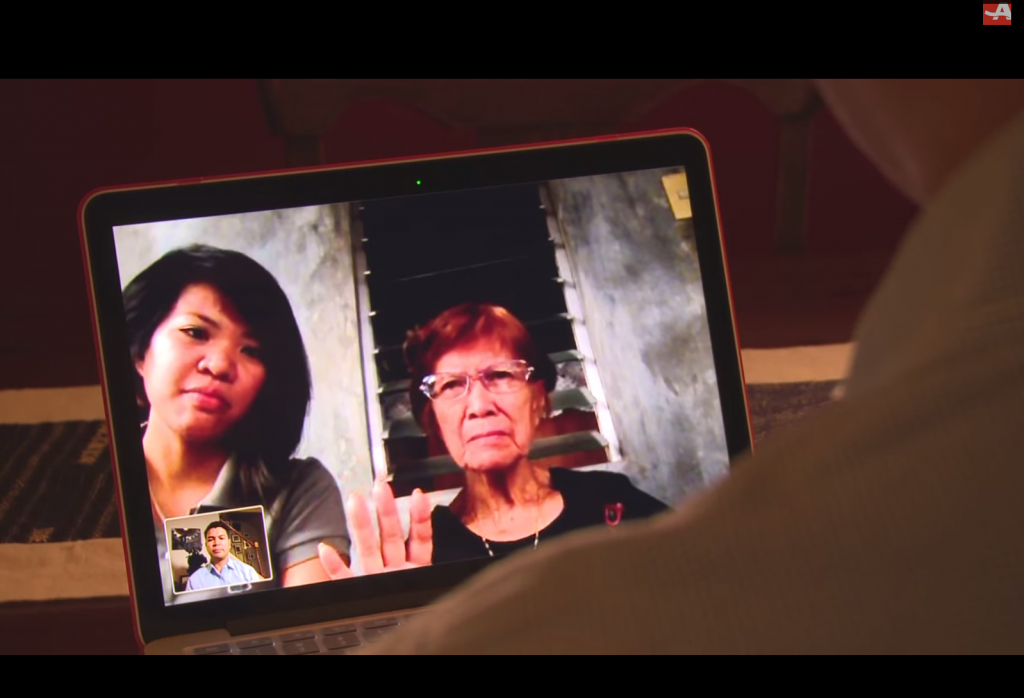 Leo Duran speaks to his mother in the Philippines using Internet technology.