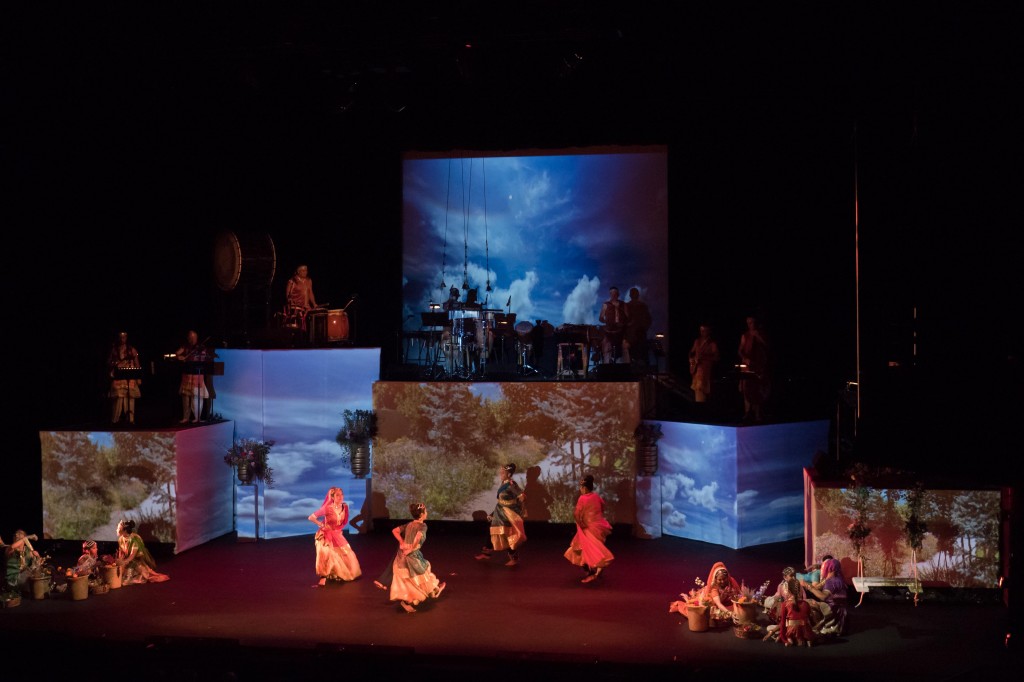 With “Gyaan” — Sanskrit for “knowledge through experience” — Mudra founder Namita Khanna Nariani has a message she wants the audience to absorb: that in today’s world of violence and tragedy, people have to come together and support each other. It seems trite to say it, but this show is about how love and community and art can save us all.

The production was inspired by the national headline-grabbing tragedies of the Aurora theater shooting, in which a family member of one of Mudra’s dancers was shot, as well as the Sandy Hook shootings and other ongoing litany of gun violence. “Gyaan” is also a reaction to the suicides of two of Mudra’s members, and senseless drunk driving deaths and sexual abuse and rape.

The first half of “Gyaan” is a powerful, sometimes emotionally-wrenching narrative about these tragedies, starting with upbeat dances and happy depictions of family and community, which are shattered by tragedy. By the intermission, the troupe helps bring lightness back to this draining but starkly powerful segment (some aerial choreography helps lighten the mood, though I’m not sure it fits the narrative as well as the last time Mudra introduced aerial moves in 2010). The audience can breath again when it’s time for a break.

There’s a purposefully long intermission so the audience can mingle, talk about what they’ve just experienced, check out visual art inspired by the performance, and taste some delicious catered Indian food.

The second half of “Gyaan” is vintage Mudra, in spades. It’s a high-energy celebration of life and culture.

It showcases Nariani’s knack for and passion for cross-cultural pollination. The first time I ever saw a Mudra show she invited an African drummer onstage to drive the dancing. These days, African drums are a standard part of Mudra performances, as are a battery of Indian drums and even thundering Japanese Taiko drums.

For the first half of “Gyaan” a full live band was assembled including an awesome guitarist, bassist, Indian violinist, flautist and two vocalists who were added to the rhythmic complement of drumming. There was even a slam poet with a righteous poem that fit the sense of chaos crisis on the stage.

For the second half, the drummers returned sans band and poet, but midway through the set the “Mudras,” as the dancers are called, took a break to have Hype 303, who I think are the best local hip-hop dance crew in the area, throw down some moves to the Indian music boosted by the live drumming.

The only thought that came to mind afterwards, as we milled around, congratulating the Mudras and Nariani and her family, was that this show deserves national exposure. The Lakewood Cultural Center has been a great, intimate home for Mudra for a decade, but “Gyaan” is bigger and more important than two weekends and a few hundred people who are lucky enough to see it. It should be produced at the Kennedy Center, or someplace in Los Angeles, or go on tour. Or something.

It won’t happen, because this is at the end of the day a local community dance group, with 150 students in addition to the experienced star dancers who were featured — and acted admirably and believably — during the first half. And Namita Khanna Nariani has a fulltime job as an architect in addition to running her studio. So “Gyaan” can’t go on the road and inspire people to have conversations about these social tragedies.

There is only one more weekend to catch “Gyaan.” Seriously, everyone should see it, and realize that we have a world-class artistic institution here, with amazing talent and cultural depth. Go to their website or go directly to the Lakewood Cultural Center website to purchase tickets.

Here’s a video that helps explains what “Gyaan” is about, and what Mudra Dance Studio is about:

GYAAN: Truth Through Knowledge. Can tragedy and loss become wisdom? from Mudra Dance Studio on Vimeo.