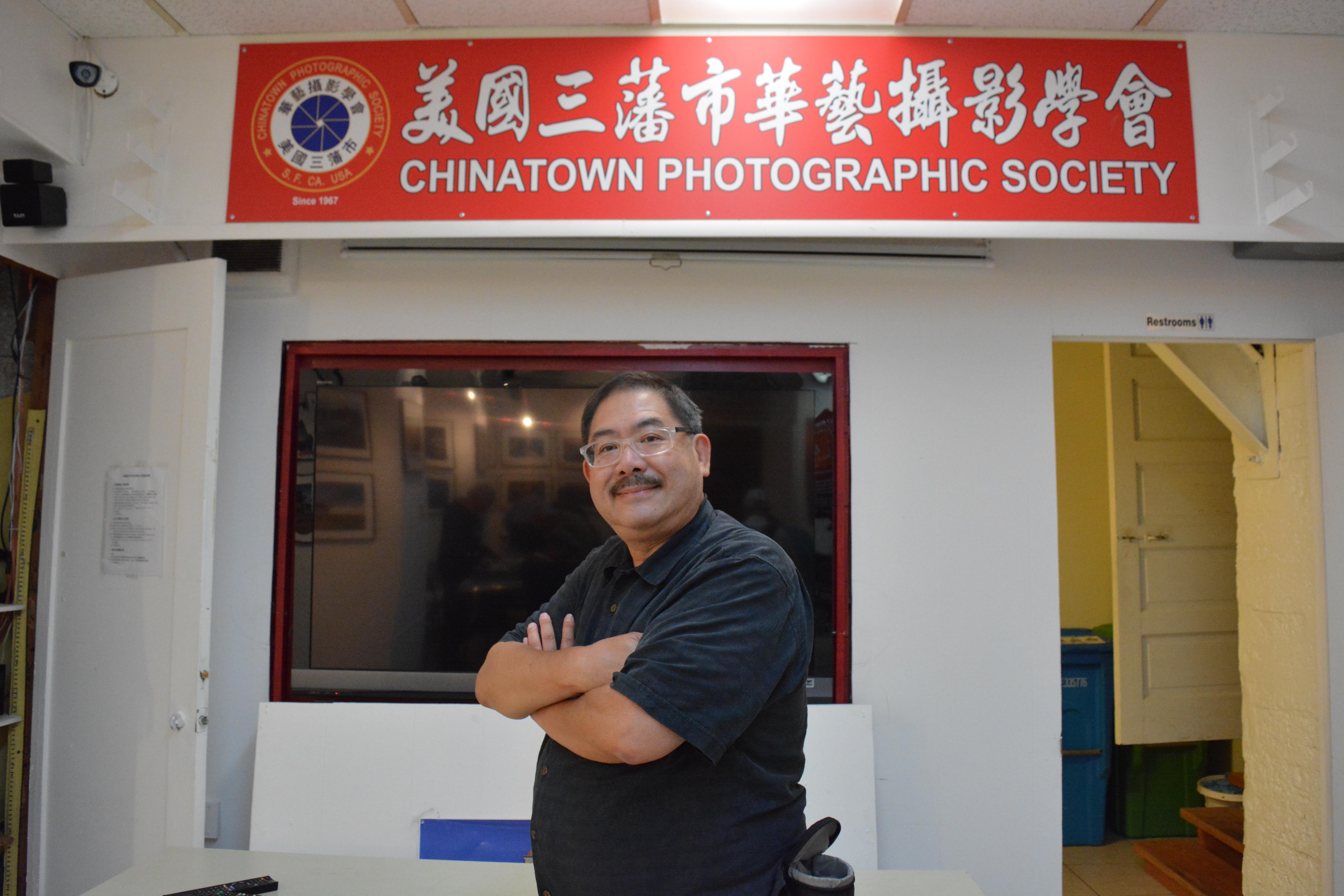 And, surprisingly, most of the photographers in the room are 50+. Many of the Society’s members are in their 60s, 70s and 80s. The oldest member is 94. He, along with several other current members, were on hand at the start, when the CPS was formed 48 years ago. Just think: in 1967 San Francisco was in the throes of “The Summer of Love” and Chinatown was the undisputed center of Northern California’s Chinese community and culture.

The Society was formed so Chinese camera buffs could hang out and learn from each other. The side benefit was that the group has captured Chinatown on film over the years while it showcases its photographers’ talents.

The CPS is tightly woven into the Bay Area’s Chinese community – its members will be taking photos at the upcoming Sing Tao Daily Asian Expo in San Mateo Sept. 5-6, not only of the event but also shooting portraits of attendees and handing out prints. The Society’s booth will be sponsored by AARP. The CPS will also be participating in the annual San Francisco Chinatown Moon Festival on September 19-20, again shooting portraits sponsored by AARP.

Frank Jang, a busy events and wedding photographer who is a board member of the CPS and in charge of its PR, fundraising and special events planning, is a relative newcomer to the CPS at 61. He remembers the CPS when he was a kid growing up in Chinatown. He was interested in photography back then but didn’t pursue it as a career.

“When I got out of high school, I got a degree in hotel and restaurant management,” Jang reminisces. “I enjoyed cooking but not so much managing. After 15 years my wife’s family started an import-export business out of China in 1974 – one of the first to start importing from China (after President Nixon opened relations with Communist China). I learned about the culture, and arts. Took trips to China….”

But when the 9/11 attacks happened, business hit a downturn. Jang retired when his daughter finished college, and picked up photography as a new business, though it was now all digital and no film. He re-connected with his childhood roots.

“I started joining groups in the Chinatown community. I wanted to give back to the community and also started documenting Chinatown,” he says.

He gives back by not charging for most of his work covering Chinatown events and organizations. “I do different tiers – if it’s an event there no money involved. Outside Chinatown I charge.”

The CPS likewise is dedicated to giving back to the community it calls home. Its members volunteer their time to chronicle events and personalities in Chinatown. The CPS has undertaken a project to shoot portraits of seniors.

“It was senior photographers taking photos of seniors in the community,” Jang explains with a broad smile. “The first project was going out to an elderly hangout and taking photos of them in their community. We took studio portraits and gave each one of them a 5×7 print for free.”

That project was funded through a Kickstarter campaign. “Now with help from AARP we can make it more like a photo booth,” he says.

Jang remembers that years ago, the CPS was the official photography source for the annual Miss Chinatown pageants. “When I was a kid the pageant was Saturday and by Sunday morning there would be an exhibition of the pageant. They did that for years and years.”

Even now the Miss Chinatown contestants are happy to stop by the CPS booth to pose for pictures with delighted visitors at Chinatown events. That’s because “the pageant girls let our photographers practice with them,” Jang says, for a DVD of the photos.

Besides capturing local pageants and other events on film, the Society was founded as a “hangout for the photographers and at that time, the news reporters,” Jang says. “We had a darkroom and any photographer could come down and develop their photos.”

The Society is strong today, but it almost shut down about two decades ago, when photography made the tumultuous switch from film to digital. “It was the weakest point,” Jang admits. “As soon as people got into digital, though, it started growing again.”

The CPS was started in an apartment building’s storage space, and moved over the years to its current location at 132 Waverly Place. “This year we doubled the facility size,” Jang says, by opening up the basement of the business next door and expanding the gallery space.

The Society has a busy schedule even when they’re not shooting Chinatown events. The CPS sponsors bus tours, such as one recent eight-day trip to five state parks where members could shoot nature scenes to their hearts’ content. Even on those tours, Jang says, “The more skilled photographers will help the novices. That’s the only you can learn.”

These days, almost all the CPS members shoot digital cameras, but the few who are committed to film use special large format cameras and hard-to-find larger format film. You might think that the CPS’s older members would be nostalgic about the old days, but they seem to have embraced the digital technology. Some of them are master Photoshop artists, turning images into fantasy scenes and landscapes with creative computer manipulation.

Some of these creative efforts have earned national and international awards for the CPS and its members, says Jang. “National contests, we’re getting deeper and deeper into that. It’s all Photoshop, HDR (High Dynamic Range), enhanced colors.” The CPS has evolved with the technology.

What hasn’t changed at the CPS is the sense of camaraderie among all the photographers. You can see them teaching each other, sharing their tips and tricks and suggesting different ways to short photos. “We work with each other, teach each other and don’t hold back secrets,” Jang agrees. “I’ve been to other photography clubs and they ignore you.”