19 Nov Immigration, refugees and the gift of citizenship 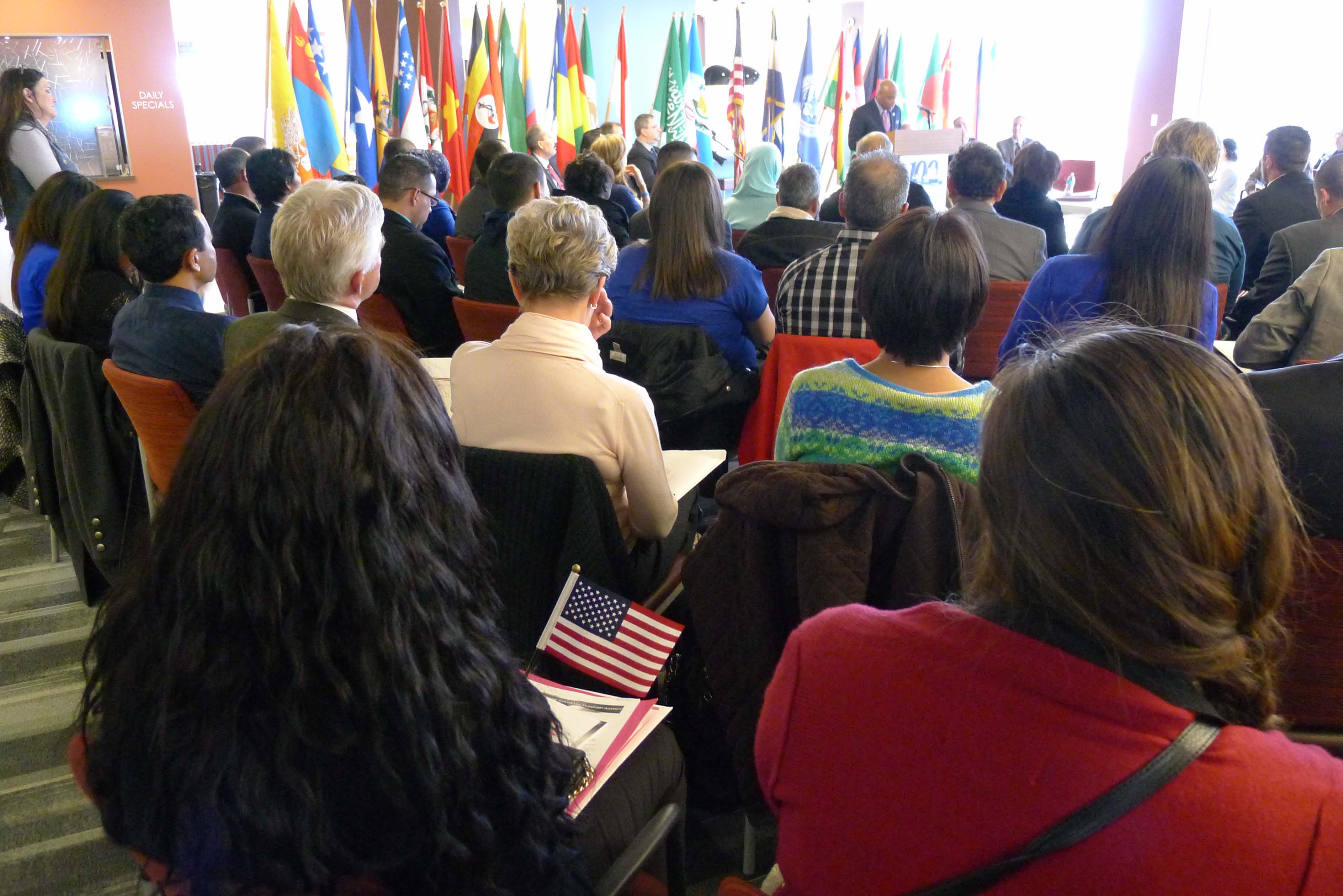 One hundred people became American citizens today in Denver. They came here from all over the world, from Bhutan to the Ukraine, Canada to Cote d’Ivoire. Some held small American flags in their hands as they waited, and waved them when they were asked to stand to represent their soon-to-be-former countries. 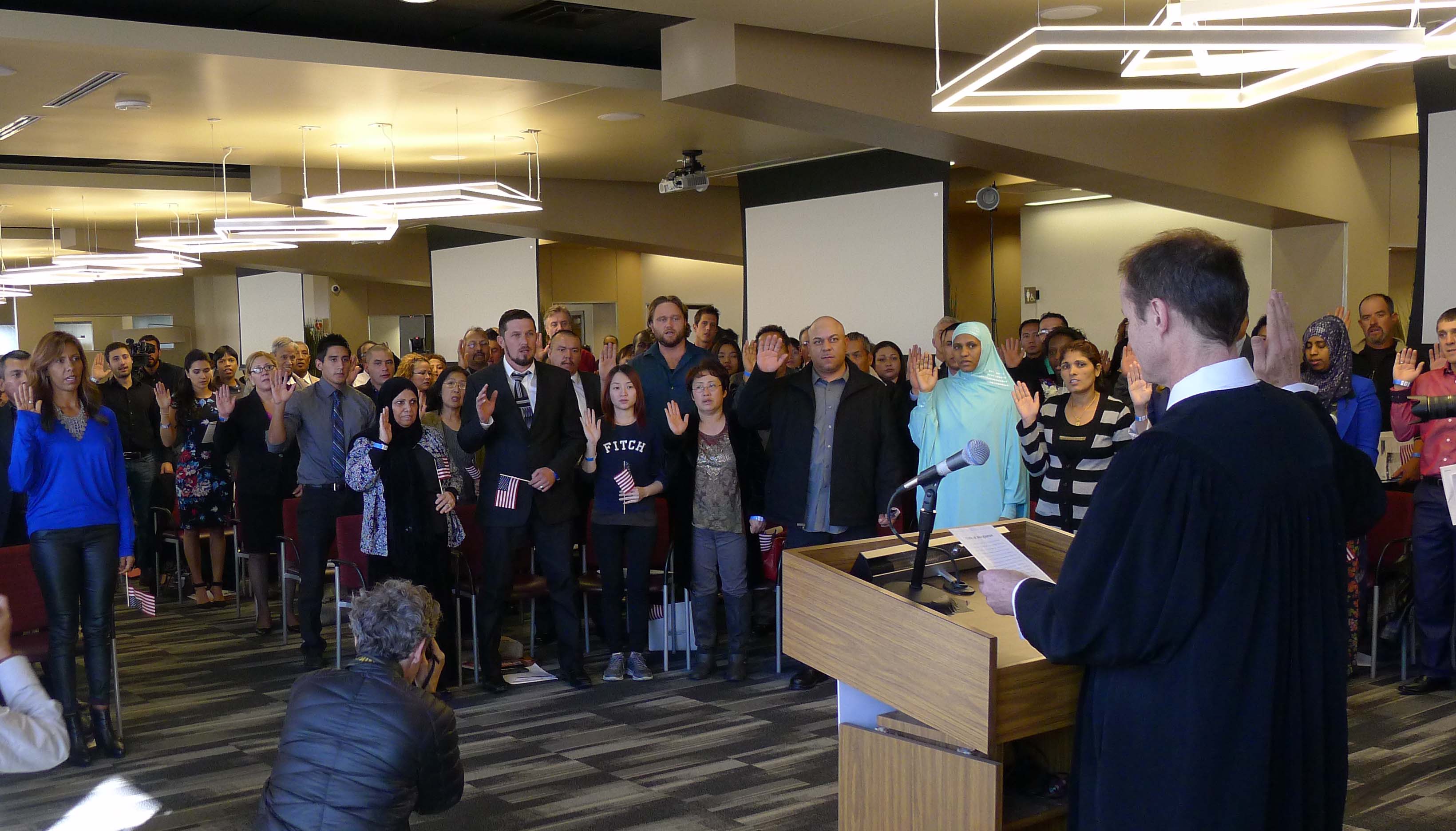 Denver Mayor Michael B. Hancock welcomed them to the city, and representatives of U.S. lawmakers also spoke to the new Americans.

Aurora Ogg, Rep. Mike Coffman’s Director for Constituent Outreach, shared how, as an Asian immigrant, she identified with the audience.

Sen. Michael Bennett’s State Director Rosemary Rodriguez commented how the right of citizenship gave Minoru Yasui, a longtime Denver civil rights activist, the strength to challenge the World War II incarceration of Japanese Americans all the way to the Supreme Court. She noted how pleased she was that just the previous day, the White House announced that Yasui, who died in 1986, will posthumously receive the Presidential Medal of Freedom. Next year, 2016, is the 100th anniversary of Yasui’s birth.

Attending this ceremony today made me proud to be American. And patriotic.

But this evening I read with with dismay about David Bowers, the mayor of Roanoke, Virginia, who cited the Japanese American incarceration from 70 years ago in an announcement that he didn’t want any Syrian refugees:

Thus, today, I’m requesting all Roanoke Valley governments and non-governmental agencies suspend and delay any further Syrian refugee assistance until these serious hostilities and atrocities end, or at the very least until regarded as under control by U.S. authorities, and normalcy is restored.

I’m reminded that President Franklin D. Roosevelt felt compelled to sequester Japanese foreign nationals after the bombing of Pearl Harbor, and it appears that the threat of harm to America from Isis (sic) is just as real and serious as that from our enemies then.

The level of ignorance and small-mindedness from someone who’s an elected leader of a city (in his fourth term, having been mayor from 1992-2000 and re-elected in 2008) is shocking and pathetic.

Like too many people, he’s conflating all Syrians with a few sick conspirators in the wake of the fear and panic caused by the Paris terror attacks. He thinks security would be best served by blocking out all refugees on the assumption that an undetermined number might turn out to be terrorists planted among the innocent.

He also got the Japanese American experience all wrong. When President Roosevelt signed Executive Order 9066 on Feb. 19, 1942 in the wake of the fear and panic caused by the attack on Pearl Harbor, it led to the imprisonment of 120,000 people of Japanese descent who weren’t refugees like the Syrians today, but people who had settled in the U.S., some for decades, and built businesses and had families. Half of those incarcerated were American citizens by birth, like my dad — and therefore like me — they were not just “foreign nationals.”

As for the “threat of harm to America” from ISIS refugee infiltrators being “just as real and serious as that from our enemies then,” it’s worth noting that not a single act of sabotage or espionage was committed by any Japanese American during the war years.

Categorizing an entire ethnic group out of paranoia led to the darkest blot on the American Constitution in our history. President Ronald Reagan signed the Civil Liberties Act of 1988 and apologized to Japanese Americans, admitting that the wartime incarceration was the result of “race prejudice, war hysteria, and a failure of political leadership” — which sounds ominously like what’s happening today. 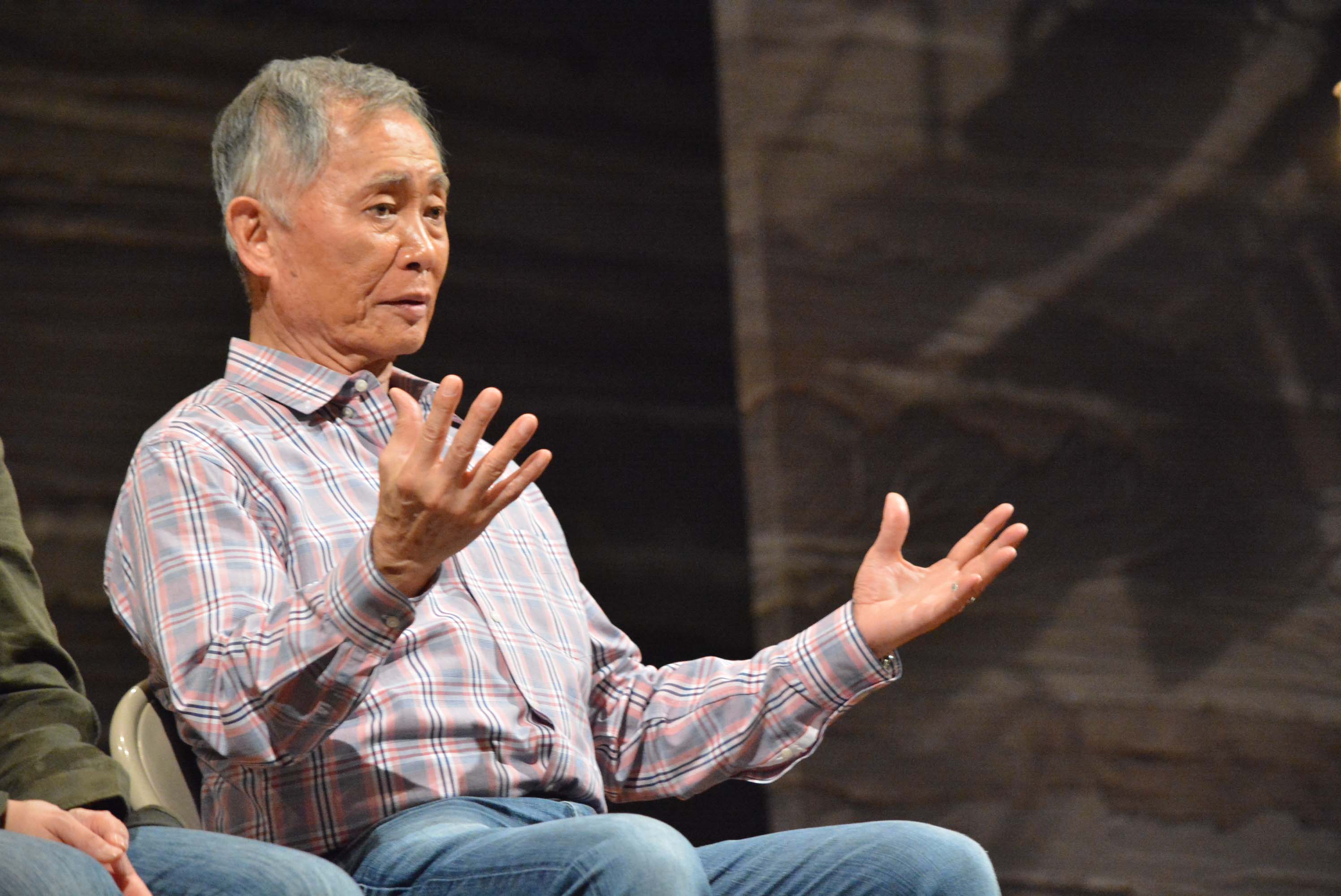 George Takei answers audience questions during a talkback session after a performance of “Allegiance.”

That tragic experience is powerfully and artfully captured in a Broadway musical that I was fortunate to see last week, “Allegiance.” The play is historic because it’s the first time on Broadway that a musical features an almost all-Asian American cast, and Asian American director, writers and composer. It’s inspired by the childhood experience of its star, George Takei, who at age 78 is making his Broadway debut. Takei’s best-known for his early career as Sulu in the original Star Trek TV series and movies, and his more recent incarnation as a social media superstar and gay marriage advocate.

“Allegiance” tells the Japanese American incarceration story through the human perspective of family dynamics and relationships. It’s about Japanese values clashing against American culture and the different paths Japanese Americans traveled to prove their patriotism, and the choices they had to make that still resonate within families and communities even today. It got me thinking about what it means to be an American.

While we were in New York, the news broke about the Paris attacks. 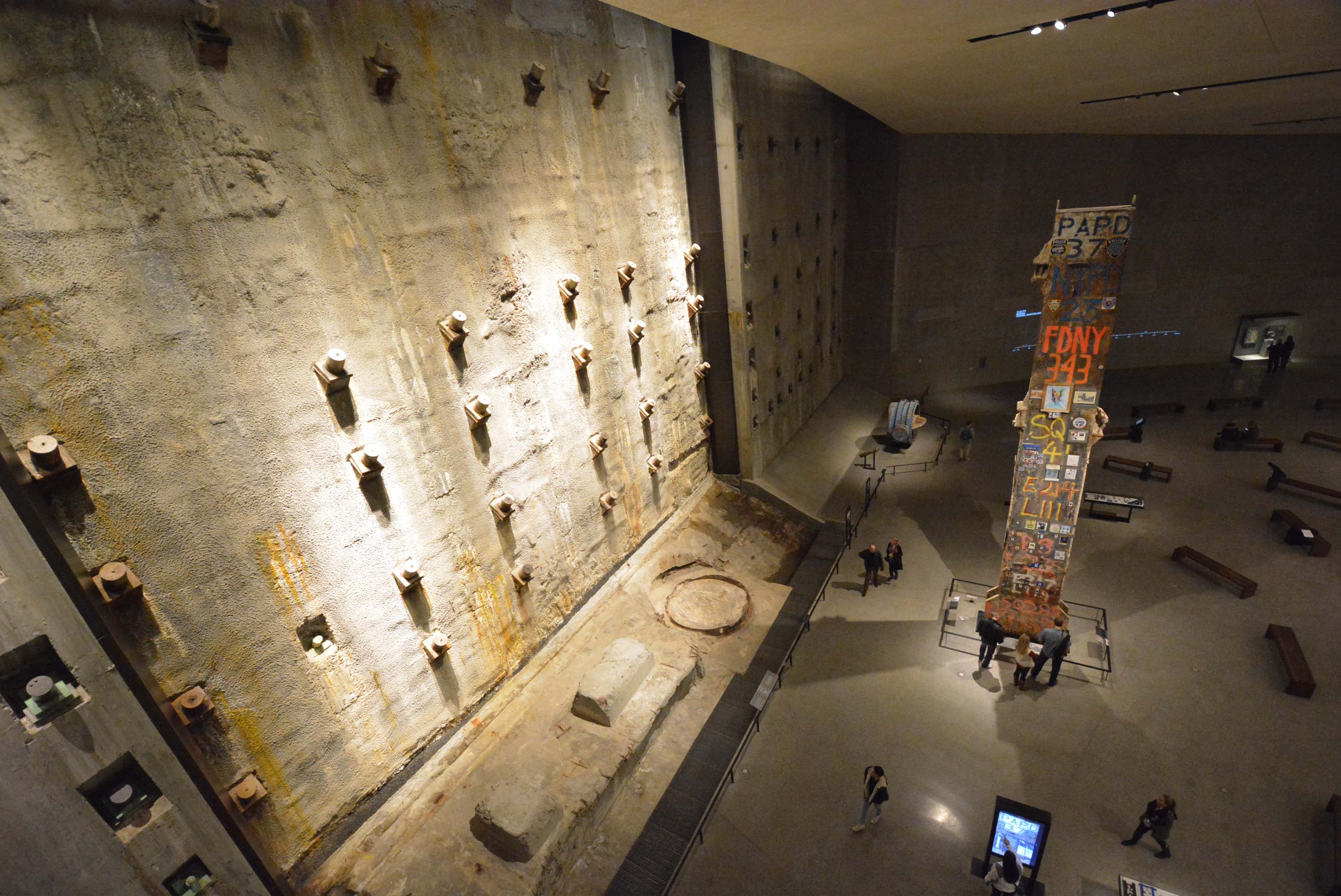 When we visited the 9/11 Memorial the day after the attacks, the horror of the carnage in France hung heavy over the crowds lined up at the site of the former World Trade Center, ground zero on 9/11/2001.

I was moved to tears by the artifacts of that terrible day: the crushed firetruck, the twisted beams, the video and audio recordings of media reports as well as the desperate, heartbreaking last cell phone messages from victims to their loved ones, and the thousands of faces, names and biographies of the fallen.

And, I remembered that the first voices to warn against indiscriminately blaming anyone of Middle Eastern descent for the terrorist attacks, and cautioning against rounding up and imprisoning Arab Americans and the Muslims, were Japanese American voices. Don’t forget, our community urged. Don’t make the same mistake again.

Thankfully, Bowers’ stupid statement sparked a backlash of criticism, not just from more sensible politicians in his own state, but from Asian American leaders and organizations.

I’m glad that the Roanoke mayor’s ill-advised statement has been soundly decried. But I’m afraid there’ll be others who’ll promote the same ignorant ideas. It appears that for too many people, ignorance is the new normal.

But watching the 100 new citizens reciting their oaths today, I felt hopeful that these new Americans will help make our country better, not worse. That they’ll vote. That they won’t be closed-minded and appreciate America’s rich immigrant history and welcoming embrace of refugees from all over the world. That they’ll learn about our history and put the lie to ignorant people like the Virginia mayor who thinks locking up 120,000 people of Japanese heritage was the right thing to do.

I’m hopeful that these new Americans will know better. #NeverAgain9066

UPDATE Nov. 20: The mayor apologized “to all those offended by my remarks,” and expressed surprised that his comment had gone out over this thing called the Internet. Damned Internet…