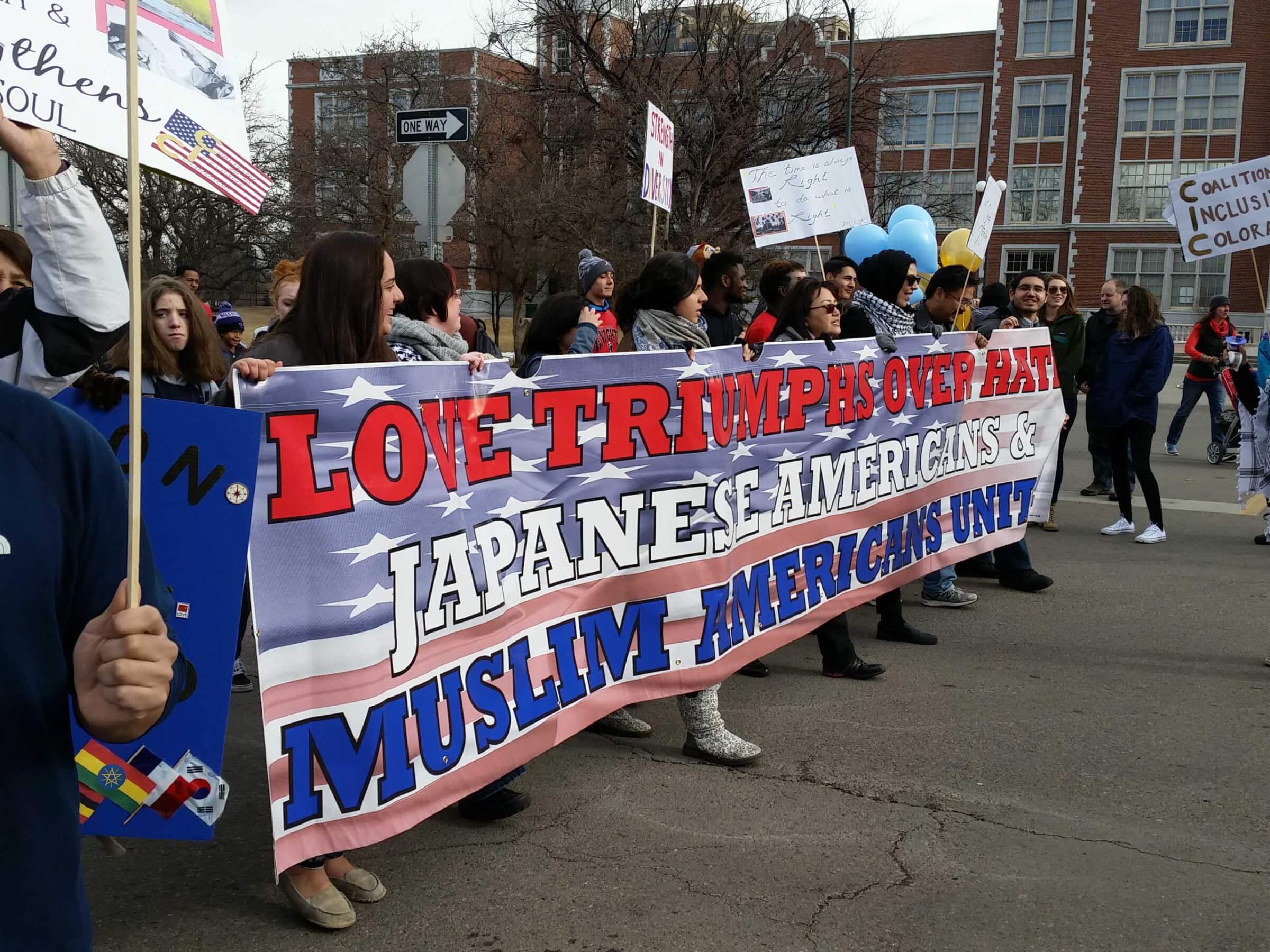 Sadly, the hatred and fear that was aimed back then at Arab Americans, Muslims, Sikhs, South Asians and anyone who might represent “the Other” are back.

After our return from New York, the anti-Muslim buzz was amped up over the plight of Syrian refugees, with some political leaders advocating tougher screening (refugees already go through very stringent screening) or denying them entry, and even suggesting that Syrian refugees should be treated like Japanese Americans decades ago. Hate crimes against Arab Americans, Muslims and Sikhs have spiked in the last several months.

After the horrible shootings in San Bernardino, California, presidential candidate Donald Trump, who’d already said he’d want a database for Muslims, announced he would ban all Muslims from entering the U.S., at least temporarily.

That announcement got Erin and I to talking about how we can’t just sit idly by and let this kind of racial prejudice go unchallenged. Her parents, grandparents, and great-grandparents on both sides were imprisoned during World War II. We fear that such tactics might be used again, even though our country should know better.

So we’ve been meeting with officials of the City of Denver, Colorado’s Congressional delegation, and representatives of the area’s JA, Asian American and Pacific Islander and Muslim communities to organize an event that would include a panel discussion and breakout sessions on topics such as the diversity of Muslims (the largest Muslim population is not in the Middle East, it’s Indonesia), who the Sikhs are, and what your rights are if you suffer or witness a hate crime. We want to educate people, and break down barriers put up by ignorance and fear.

This event will be just one in a series all year that began several weeks ago with a show of unity, when a group of us participated in the annual Martin Luther King Marade (march and parade) with a large banner proclaiming, “Love Triumphs Over Hate: Japanese Americans and Muslim Americans Unite.” The banner got a lot of bystanders stalking and taking photos, and groups of Muslims and Jews joined our group.

Also, coming up, I’m going to cover this topic at the Mile High JACL’s annual Day of Remembrance event (which marks the day that President Roosevelt signed Executive Order 9066, paving the way for the JA concentration camps) with a presentation about anti-Asian movements and JA incarceration followed by a panel discussion with JAs, Muslims and Sikhs.

We’re part of an ad hoc group called the Coalition for an Inclusive Colorado (CIC), with community leaders and organizations that represent JA, AAPI, Muslim, Sikh and interfaith community, as well as representatives from the City of Denver and Colorado’s Congressional delegation.

The CIC is organizing a celebration of Colorado’s history of inclusiveness with an event on Feb. 24 at the Ralph Carr Judicial Center, where the Colorado State Supreme Court resides. Ralph Carr was the pre-war governor of Colorado (a Republican being groomed for a future presidential run) who lost his political career by objecting to the imprisonment of Japanese Americans on racial grounds. AT the CIC celebration, Gov. Carr and current Gov. John Hickenlooper will be given “Sandpiper Awards” to praise their embrace of diversity and justice in the state (Hickenlooper in December stated his support for the Muslim community).

And in March, the CIC will hold a big event with the City of Denver that will include an interfaith and diverse panel including Muslims and Sikhs and Asian Americans, law enforcement and government officials, followed by action-oriented breakout sessions on your rights when faced with a hate crime, and educating attendees about Muslims and Sikhs.

In October, the CIC will work on an event that will continue the dialogue with Muslims that will celebrate the centennial of the birth of Minoru Yasui, the civil rights leader who called Denver home for many decades after WWII. He was one of three men who fought the incarceration of Japanese Americans all the way to the Supreme Court during WWII. Yasui’s family last December traveled to the White House and accepted the Presidential Medal of Freedom for Min’s life work. The Yasui family is the heart of the CIC, and I’m honored to be working with them on this year-long effort to support Muslims.

I’m glad that once again, JACL was among the AAPI organizations that made a public announcement supporting the Muslim community late last year. But although stating your support is great, we’re all against racism and prejudice, right? We can do more. Think how things might have been different in 1942 if others stood up alongside Japanese Americans and fought the concentration camps.

I urge Japanese Americans, Asian Americans and everyone who know too well the sting of decades of hate crimes and racism, to reach out to the Muslims where you live, and plan events to help introduce them to people who only see them through the filter of fear and prejudice.