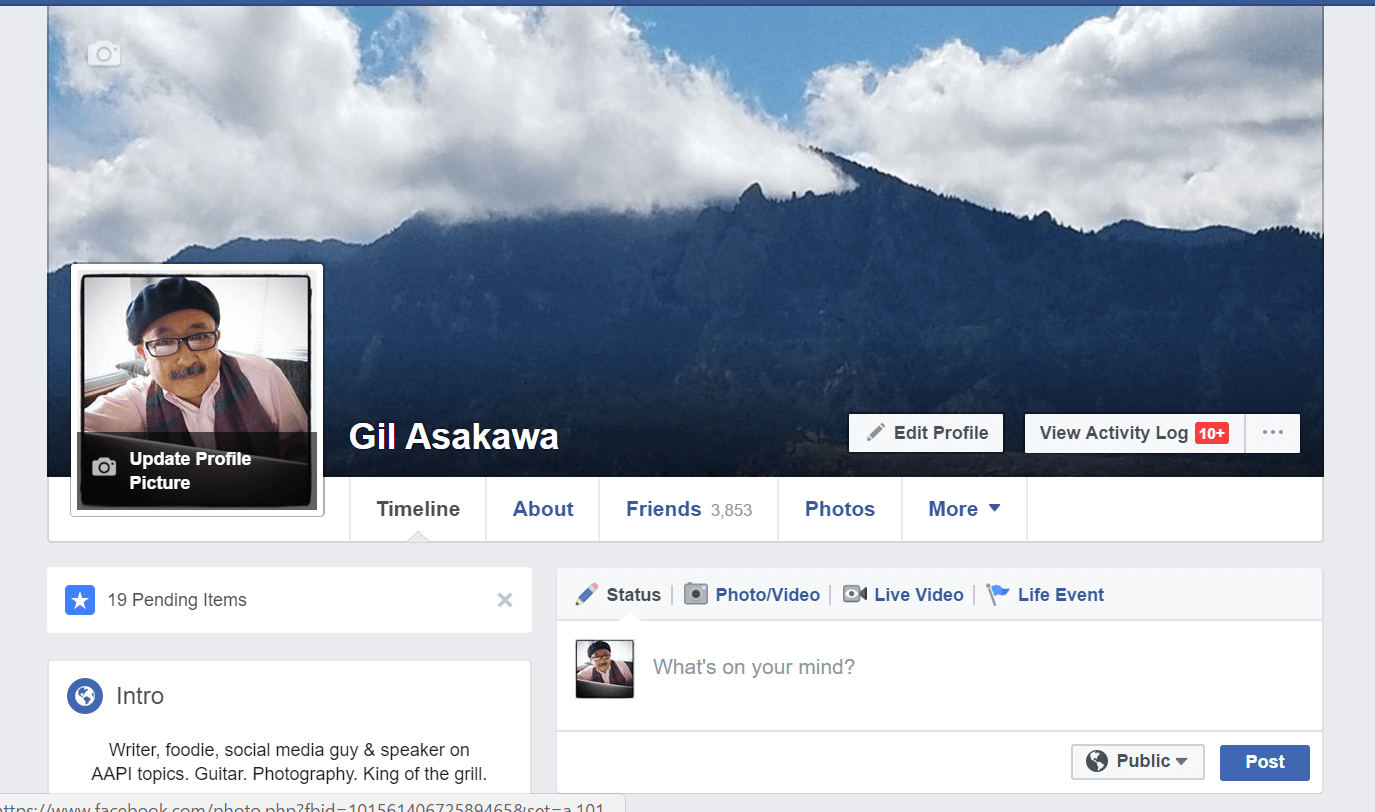 He makes the typical charge that the left needs to accept that Trump won the election and need to move on. This cracks me up, since Trump himself is the one that can’t seem to let the election go, mentioning Hillary Clinton weekly.

On a recent post I shared about the Hollywood “whitewashing” that cast Scarlett Johansson as a Japanese anime character in “Ghost in the Shell,” John commented:

Gil why is everything about your posts is Racism. sexism. homophobe and xenophobe ? Did America scare you as a child. I have been following you for over a year and I never see you defend or post anything positive about America and it’s values WHY ?

Others replied that I often post positive stories about the US, and I responded with this:

John, I share about race issues precisely because I love the United State of America and I’m concerned about the rise of racism and fear and hatred.

He’s recently begun sharing some of his favorite conservative stories on my “wall” and I had to ask him to stop. He can comment on my posts, but I don’t need to see his. If I want to see what he’s sharing, I can always go to his page. Recently he asked me why I don’t share stories like one about a white pizza delivery man who was murdered by two African Americans instead of just posting about the terrible things happening today to Muslims, Latinos, African Americans and other people of color. It turns out the story he shared, which was from a right-wing site, was “fake news.” A quick search showed that the murder took place several years ago, and it was a drug deal that went bad. The victim was trying to buy drugs, and wasn’t an innocent pizza delivery man at all.

So now I delete stories that others post that I wouldn’t post myself. He can post them on his own page. Yet, although people have told me to just unfriend John, I don’t want to. At least, not yet.
The country is so divided now that I feel it’s important to have someone like John seeing and commenting on my posts. I’m actually glad he’s willing to check out my page and see what I’m sharing. His comments sometimes are in all CAPs so he’s yelling at me, but I reply without yelling. I try to share stories that my friends will identify with, and hopefully learn from. But I think it’s more important to keep connected to people who don’t automatically agree with me, and who aren’t like me.

I don’t want to pick fights. I want to keep lines of communication open. Discussion is the key to understanding. I’m always willing to speak about Japanese American incarceration, the history of Asians in America and the history of Asian pop culture in the US (hence my interest in “Ghost in the Shell” and whitewashing) as a way of educating people.

If I can explain about the many waves of hate movements against Asians, and how they’re echoed today in anti-Muslim, anti-Latino and anti-immigrant sentiments today, maybe the future will be a little more hate-free. It might be just one person at a time, but that’s why it’s important to keep in touch with people like my Facebook friend John.

NOTE: This post was originally published in the Pacific Citizen newspaper (full disclosure: I’m the editorial board chair for the PC).

Followup: John hasn’t posted or commented on my Facebook wall in some time, and he hasn’t posted anything on his own wall since February. I haven’t blocked or “unfriended” him.