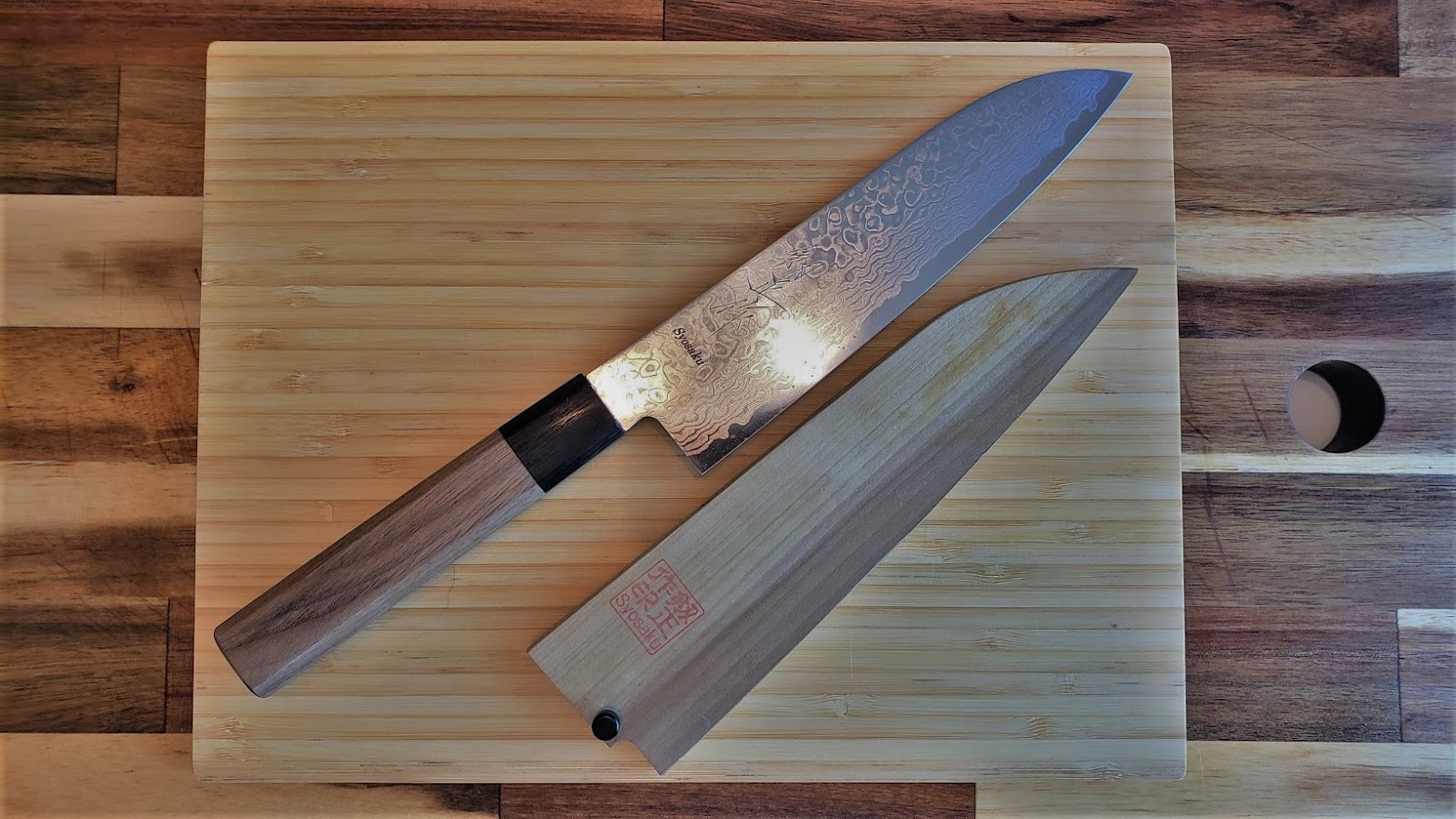 01 Jun Japanese knives give you the edge on cooking

I love to cook, which is a good thing because I love to eat!

I can trace my love for cooking to my childhood in Tokyo, watching my mom cook both Japanese and Western foods for our family meals. She was born in Nemuro, on the eastern-most tip of Hokkaido, the northern island of Japan. She cooked a variety of dishes – mostly the cuisine she knew from growing up with the best, freshest seafood and acclaimed beef, venison, and local vegetables, as well as the many variations of seaweed that are harvested in the waters around her hometown.

I can vividly remember the sounds, smells and sights of her cooking in our kitchen, both in Japan and in the US after our family moved to Virginia and then Colorado.

Each morning now as I grate ginger for a daily lemon drink, I recall the care she used to grate ginger, garlic, daikon or other vegetables as her thumb and forefinger got closer to the teeth of the oroshigane.

And I remember watching her chopping and slicing vegetables on her well-worn wooden cutting board, using an old Gyuto knife, a Japanese version of a Western chef’s knife. I don’t know how long she had it, but it’s a Sugimoto 8-inch knife that’s a bit worse for the wear, but when we moved my mom into a memory care center, I rescued the knife from the kitchen drawer. I’m glad I did – with a lot of sharpening on a whetstone and getting used to the odd bend in the tip, I use it all the time.

My mom used to use it to chop large and small veggies and pieces of meat, and she did what trained chefs do – make a claw out of one hand and hold down the food while the other hand cut precisely, from paper-thin to bite-sized chunks. If she was cutting long veggies like green onions or carrots, she invariably cut the pieces at a slant – I think it’s a Japanese thing to slice into diagonal pieces, because they simply look more aesthetic, even if you’re just sprinkling green onions atop a meal.

My wife Erin also learned to cook from her mom, and from her grandmother. We’re all products of our family experiences when it comes to our culinary profiles.

For instance Erin and I have been laughing recently at all the things my mother did NOT use to cook. Years ago, when we were at a Japanese restaurant where the owner served us special miso soup in which he had cooked freshly-picked Matsutake mushrooms (the Rocky Mountains west of Denver were fertile hunting grounds for the Japanese community for years), my mom shrugged. She explained that she grew up in Hokkaido where she ate Shiitake mushrooms, not Matsutake, so she was unimpressed. Likewise, when Erin cooked Hiroshima-style Okonomiyaki, a delicious savory pancake/pizza, my mom thought it was OK but she didn’t eat it in Hokkaido, so… shrugs.

Because of my mom’s food history, I never had Matsutake or Okonomiyaki until I met Erin, who’s a fourth-generation Japanese American, or Yonsei, who’s more connected to her cultural roots than many second- or third-generation JA. (For the record, I’m technically Sansei, or third generation, because my dad was born and raised in Hawaii.) I grew up having mochi in Oshiruko, or Zenzai, a sweet azuki or red bean soup every New Year instead of the more typical Ozoni, which is made with dashi soup and is therefore savory, not sweet. That’s a whole ‘nother story about me being introduced to all the “new” Japanese dishes thanks to my expanded Japanese American family.

Still, I had lots of knowledge about cooking from growing up, and I’ve learned lots more from Erin.

After I started using my mom’s Gyuto chef’s knife, I became curious about Japanese knives in general. They’ve become a “thing” in the Western consciousness, almost as if the evolution of sushi – good and mediocre – from exotic vehicles for what used to be considered gross raw fish to treasured symbols of sophistication that can even be found in many supermarket chains (that’s the mediocre stuff) has been mirrored in the fascination with Japanese knives.

I studied up on Japanese knives. There are a handful of main types, but lots of knives that used for specialized cutting. The two main general-use chef’s knives are the Gyuto (my mom’s knife), a Japanese (usually shorter) version of a French of German chef’s knife, and the Santoku, the “three virtues,” or multi-purpose knife with a blade that slopes down to a point and a mostly straight edge instead of a curved one for rocking as you cut. The “three virtues” are the Santoku’s three typical uses: slicing, dicing and mincing. A couple of years ago, I decided to complement my Gyuto knife with a Santoku.

There are districts in Japan that are well-known as retail hotspots for kitchenware including knives, and cities in Japan that have been famous for centuries for hand-crafting knives as well as samurai swords before them. The cities most often cited as the source for the best knives are Sakai outside of Osaka, and Seki in Gifu Prefecture. These cities are revered for their artisan approach to forging, shaping and sharpening the world’s most amazing knives for all uses. Small family-owned shops have been grinding and polishing knives for generations, and since they’re handmade instead of cranked out on some assembly line, they’re usually more expensive than the typical $15 kitchen knife you can get at the grocery or hardware store.

There are hundreds of YouTube videos extolling the virtues of Japanese knives, and dozens of websites that sell a multitude of brands, including, of course, Amazon. Just a quick Google search comes back with almost 350 million sites, articles, links and videos. There’s no shortage of expertise on knives from Japan.

When we went on a family trip to Japan in 2019 (just months before the pandemic, luckily), I had hoped to visit Kappabashi, the kitchenware district with knife shops in Tokyo not far from Asakusa, the famous Buddhist temple we always visit. But due to weather and rearranged itineraries, we missed the chance. I also ran out of time to shop at Nishiki Market in Kyoto, famous for its food and kitchenware including knives. Ditto a district in Osaka. After returning to Colorado without a Japanese knife, I went online to research retailers. Suddenly I saw lots of knife sellers’ ads on websites and in my social media, thanks to the Internet’s ability to track what you’re looking at.

I learned to be suspicious of some companies that seem to sell great Japanese knives, but used suspicious terms like “Japanese-style” knives, say their “headquarters” are in Tokyo (could be just an office to get mail) or never mentioned whether the knives were made in Seki, Sakai, or some other Japanese town.

I came across a site called Syosaku-Japan that proudly proclaimed how its knives are handcrafted by family-owned artisan shops in Sakai, and it offered a range of prices for each style of knife. I ordered a Santoku knife with a Japanese-style octagonal walnut handle as opposed to the smooth European-style handle on my mom’s Gyuto. Yes, it was more expensive than any knife I’d ever seen at Bed, Bath or Beyond and were in Williams Sonoma or Sur La Table territory. But it’s a Japanese company specializing in Japanese knives, and I felt good about buying the Santoku through Syosaku. The free shipping and three-day delivery (thanks to fulfillment from a US warehouse) helped too.

When it arrived, I was shocked at how light and easy to handle the Santoku is. My Gyuto is longer so it’s naturally heavier, but something about the Santoku is – magical. Its lightness makes it incredibly easy to maneuver, and its edge is so sharp it cuts through food without ever damaging any pieces of meat or vegetable, like it cuts clean at a cellular level. It glides through everything. The best way to describe using my Santoku is that it makes cooking fun by making cutting and prepping ingredients joyful. I can’t wait to take it out of its handmade magnolia wood saya cover to begin effortlessly slicing and dicing my way to dinner.

I love the knife so much that for Christmas, I got Erin a gorgeous glass Urushi charger plate from Syosaku-Japan.

It’s a 13.9-inch black glass plate with hand-applied gold leaf and layers of urushi lacquer, a 7,000-year-old traditional Japanese craft. The plates that Syosaku-Japan sells are dishwasher safe, but they’re so beautiful that it seems demeaning to put food on them and then wash it. I’d rather show it off with a display stand. Besides, they’re pricey – not for the faint-of-heart who needs a set of Corelle dinnerware or dishes from Ikea.

I’ve stayed in touch with Toshi-san, the founder of the company, and learned that he lives in Yokohama and he and his partners started Syosaku-Japan in 2017. He’s caught the rise in interest that the rest of the world has found in Japanese knives, and because I like him and his products, I’ve agreed to become an affiliate partner with links to his site that will net me some payment when people order through my mentions. I’ll be transparent about this and note that any posts and social media mentions are sponsored.

He was kind enough to send me a red plate to match the black one I bought a year and a half ago, and a Nakiri vegetable-cutting knife to review. More on those, including a video using the Nakiri coming soon!

(SPONORED POST: As a new affiliate of Syosaku-Japan, I’ll get a small percentage of whatever is sold through this link. But I’ve been featuring my Santoku knife in my foodporn posts for the past year and a half, and been meaning to write about Japanese knives and Toshi-san’s products even before I was contacted about being an affiliate.)