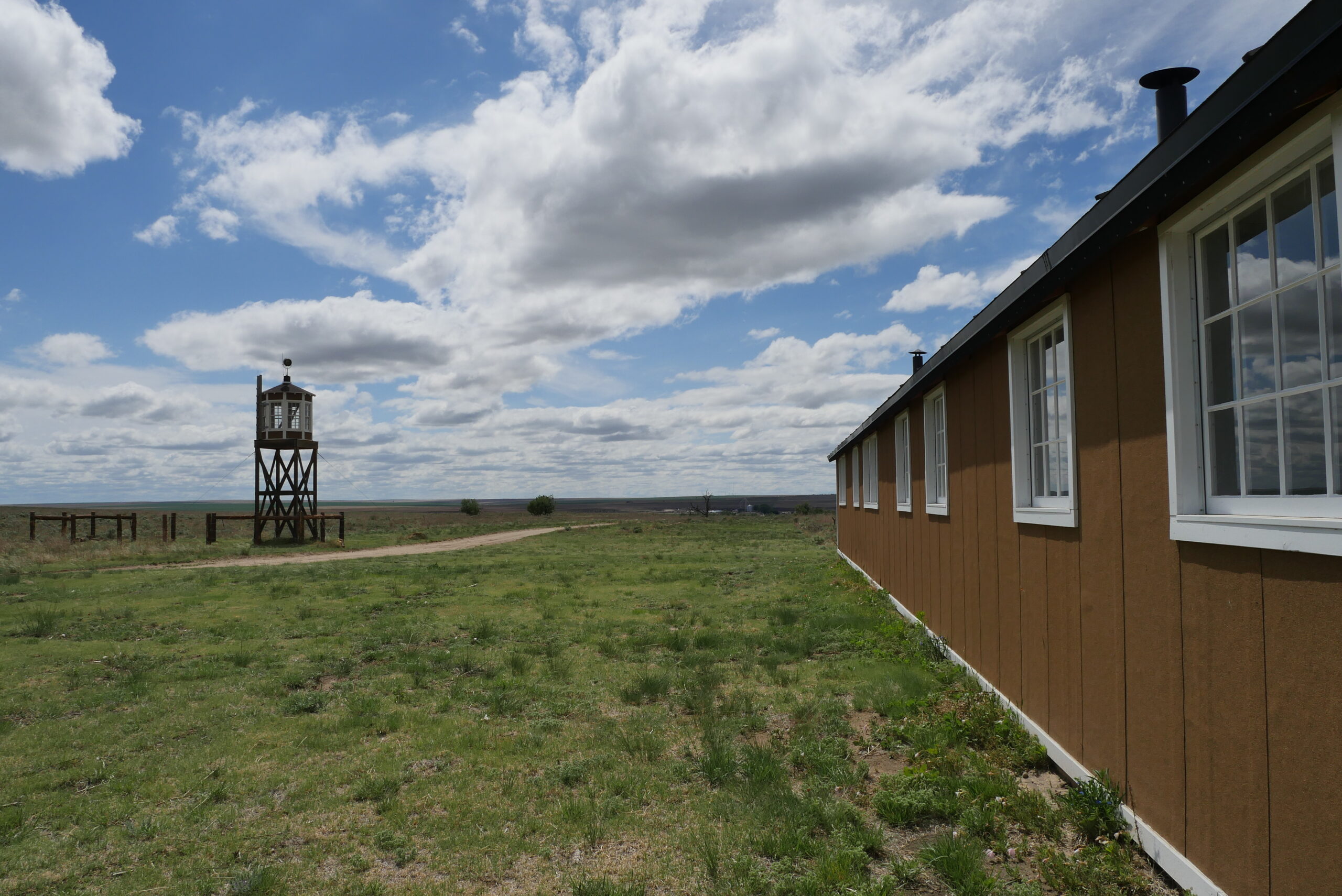 02 Apr This year’s pilgrimage to Amache will be very, very special

Posted at 11:26h in Uncategorized by Gil Asakawa
Share

Every year on the Saturday before Labor Day Weekend, people converge in southeast Colorado to visit Amache, the camp where 9,000 people of Japanese descent were incarcerated during World War II. This annual pilgrimage started in 1975, organized by Denver activists Marge Taniwaki and Russell Endo. It’s always an inspiring journey, which starts at the site of the concentration camp and ends at nearby Granada School, where community leaders and the amazing students of the Amache Preservation Society at the school welcome and feed the visitors and give presentations.

There’s a ceremony with both Buddhist priests and a Christian minister at a memorial to the young men who left Amache to fight for the U.S. during the war that stands in the small cemetery at the camp. The pilgrimage is a wonderful celebratory tradition, but at its heart a solemn gathering.

But this year, on May 21, it’ll be different. When the bus heads down from Denver on the four-hour drive to Amache after picking up riders at Simpson United Methodist Church in the western suburbs and then at the Tri-State Denver Buddhist Temple downtown, there will be a spirit of joyful anticipation in the air.

It’ll be the first time people have visited the site of Colorado’s sole Japanese American concentration camp since it’s been approved to become a U.S. National Park.

H.R.2497, the Amache National Historic Site Act to make it a unit of the National Park System, a bipartisan effort led by Colorado’s Congressional delegation was signed into law by President Biden on March 18. The bill was sponsored by Rep. Joe Neguse (D-CO) and co-sponsored by Rep. Ken Buck (R-CO), and other Colorado Democrat representatives such as Diana DeGette, Jason Crow and my congressman, Ed Perlmutter. The effort was pushed by Colorado’s John Hickenlooper and Michael Bennet, in the Senate.

Amache – the official euphemism for the Japanese American incarceration camp is Granada Relocation Center – was named one of Colorado’s most endangered sites in 2001, then designated a National Historic Landmark in 2006. These titles helped give the site a bigger profile nationally, but with the passage of the new law, Amache will join Manzanar (the most well-known thanks to the book and movie “Farewell To Manzanar”) and Tule Lake in California, Minidoka in Idaho and Honouliuli in Hawaii as an official National Park site.

At this year’s Amache pilgrimage, I think you can expect a lawmaker or two … or more, as well as a larger-than-usual crowd. The potluck buffet will need to be beefed up and more people will have to bring more dishes, and I suspect the school auditorium will be standing-room-only.

That won’t happen right away, though – the town of Granada needs to officially transfer the land to the National Park Service before it’s a done deal. It could become final in 2023, which happens to be the 150th anniversary of Granada. As it is, the Senate passed the Amache National Historic Site Act with unanimous consent in February, just in time for the Day of Remembrance, which is held on or around Feb. 19, the anniversary of the day in 1942 when President Roosevelt signed Executive Order 9066 that led to the roundup and incarceration of over 110,000 people of Japanese descent — half US-born American citizens and most of those just children — in 11 camps in the mainland US and Hawaii.

Once it becomes part of the NPS, Amache will have the resources to more easily preserve and interpret the site for the public and to educate people about the experience of Japanese Americans during WWII.

That process of preservation and education has been done by generations of volunteers over decades. The Denver Optimists Club, led by the late Jim Hada, whose mother was incarcerated at Amache while he and his father farmed in northern Colorado, helped preserve the site and raised the funds to erect the memorial to the prisoners who fought in the US military during the war.

And in the 1990s, a young social studies teacher hired at Granada School, John Hopper, was astonished to learn that Amache had been on land just outside town. He began teaching about it to his students, and then the students formed the Amache Preservation Society (www.amache.com) to do the hands-on work of preserving the site in partnership with organizations like the Denver Central Optimists, and since 1976, the survivors and others who’ve been coming to Granada to visit and donate and help out.

In 2008, University of Denver anthropology professor Bonnie Clarke began bringing students every other summer to conduct archeological digs on the site, coming up with hundreds of artifacts and bits of history reserved among the dry soil and sagebrush. They’ve been displayed in exhibits and on the DU Amache Project website.

The Granada students even opened a museum in a donated home a block from their school, and jampacked it with artifacts and displays they created for talks they give across the region and over multiple states. Each year, a new crop of dedicated students sign up for the class – Hopper is today the principal of the school and still heads the class and the Preservation Society. John Hopper was even given a special commendation by the Consul General of Japan at Denver in 2014 for his tireless work.

Over the years, the students and volunteers have rebuilt a koi pond, water tower and a guard tower, and a barrack building on the site so that you don’t just see flattened concrete foundations and grassland. You can walk inside the refurbished building, and feel the claustrophobia of entire families living for several years in one room with no privacy.

I’ve been on the pilgrimage a few times and got to enjoy a picnic lunch in the town park early on, where I was curious about a building that clearly came from Amache – a simple rectangular barrack that had been used as a recreation center with aging and peeling tar paper nailed over its frame. I peered inside a window and saw that it was used by Granada as a storage shed for its parks equipment. I could imagine people decades earlier playing games or making crafts inside.

That barrack is back in Amache these days, looking all the more forlorn and haunted amongst the prairie grass. But at least, it’s back home.

Amache – and hopefully America, though sometimes I have my doubts — has come a long way since 1942, when Japanese immigrants and US-born American citizens were forced to leave their homes and businesses, friends and even pets, to live in desolate places (no offense to the farmers and residents of Lamar, Granada and southeast Colorado) in hastily-built prison camps for several years.

Amache was carefully tended and steps made to restore it, long before the new law was passed. Let’s hope that as a National Park, Amache can serve an even better role in remembering this terrible time in American history and make sure this type of tragic, racially-charged chapter in our history is never repeated.

If you’re interested in joining the bus pilgrimage this year on Saturday, May 21, you can email Calvin Hada at calvinhada@gmail.com. Here’s the page on amache.org about this year’s pilgrimage.

(NOTE: a version of this column will run in the Pacififc Citizen newspaper of the JACL, with fewer photos.)

Adele Arakawa, who was at the time the main anchor for KUSA-9News, is Japanese American and she reported on the 2014 pilgrimage with a cameraman.

Bob Fuchigami, an Amache survivor who testified to Congress last year, helping to push the passage of H.R.2497, the Amache National Historic Site Act, has been a powerful force behind preserving Amache. He was on the committee that advised History Colorado to create their exhibit about the Japanese American incarceration, and last year he published “Amache Remembered,” about the camp. He was interviewed by KUSA in 2014.

John Hopper received a commendation from Ikuhiko Ono, then-Consul General of Japan at Denver, for his years of advocacy at Amache, and inspiring generations of students to join him in the Amache Preservation Society.

A block away from Granada School, students opened and maintained an Amache Museum and shared their knowledge and passion with visitors. The building in these photographs I shot in 2018 was donated, and a new, larger donated building now houses the museum, in downtown Granada at 205 E. Goff Ave.

One of the saddest spots at Amache is the small cemetery where the Honor Roll memorial stands. Most of the graves were moved years ago to be with their families, but what’s left are several lonely markers for infants who died within days, or were stillborn. The cemetery had been trampled by livestock for decades but it’s now fenced off and the grass is thriving.