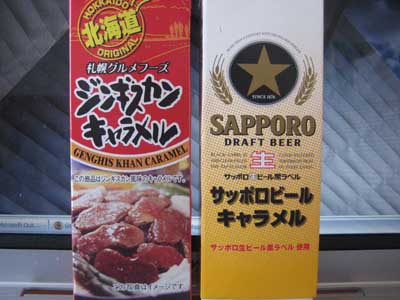 But American palates probably aren’t ready for some of the flavors that are available in Japan.

My brother Glenn and his family went to Japan a few weeks ago with our mom, and he brought me back two boxes of caramel made by the Glico company. I was excited because I love caramel (so does Glenn), and I had grown up as a kid in Japan, eating Glico-Morinaga caramels. The box was a yellowish tan, and had (still does) an illustration of a man running on a track. The graphic represented the fact that one Morinaga caramel (individually wrapped in wax paper) supplied enough calories for a runner to cover a 300-meter track. Glico these days makes a whole lot of candy and snacks, including the popular Pocky stick line of pretzel sticks coated with chocolate and assorted other flavors.

Anyway, these boxes of caramels were different, but I didn’t give it much thought. One said “Genghis Khan Caramel” on it in English, and the other had the “Sapporo Draft Beer” logo — one of my dad’s favorite beers.

I just put them in my backpack to take to work, and forgot about them for a few days. Then I tried one, and thought it had an unusual taste, but didn’t try to figure it out. I popped one of the other ones in my mouth and stopped working. It tasted like … beer. And caramel.

I looked at the box again, and realized it was caramel flavored to taste like Sapporo beer. I wondered for a moment if my dad would have liked this (he liked sweets, and he definitely liked beer).

Then I looked at the first box. Beneath the Genghis Khan label I realized the photo was of beef. That was the unusual flavor of the first caramel I ate. It was beef flavor… or more specifically, Mongolian beef (I suddenly made the connection with Genghis Khan, who ruled Mongolia).

The beef flavor was almost subtle — an initial sensory wave when you put the caramel in your mouth, and hints as you chewed. The beer flavor also was something that was strongest at first.

Only the Japanese could come up with such an idea, I thought. I wondered how many other oddball combinations might be available — pizza-flavored caramel? Nacho cheese? Sushi? Teriyaki? (Not too far-fetched, since teriyaki is already soy sauce and sugar: salty and sweet combined.)

Hmm, you know, that last one just might sell!

Here’s a photo from Wikipedia of the Glico Running Man neon in Osaka, where the company has its headquarters: 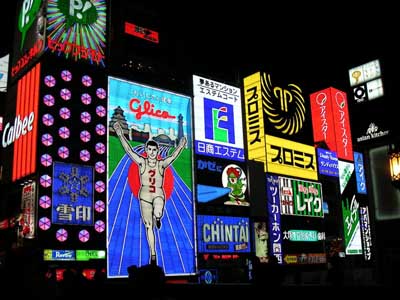