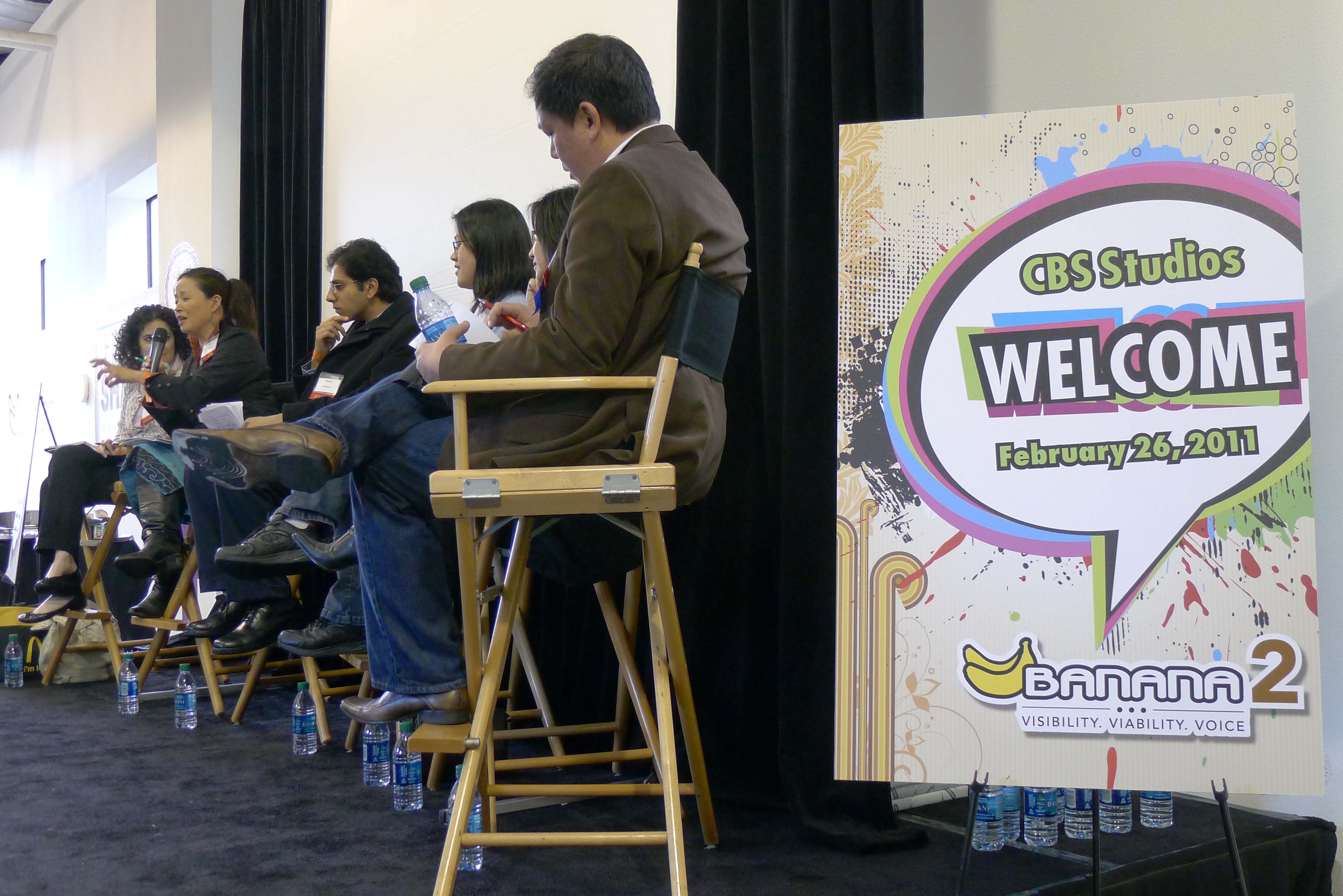 It took a little over a year to organize, but Banana 2 took the inspirational spirit of the first conference and turned it into a terrific event for a couple-hundred people.

Thanks in large part to the logistical, operational and sponsorship support of IW Group, the LA-based marketing, advertising and public relations agency that helped produce the conference, B2 was an all-day conference instead of one afternoon panel. Erin knew Bill Imada, the CEO of the IW Group, and we had been panelists at an Asian community event that the agency organized. After B1, we pitched Banana to IW Group and IW Group to Lac.

Banana 2 was held on Feb. 26, 2011 at the CBS lot in Studio City. The day-long conference featured seven panels with spirited discussions and breakout sessions including a bloggers’ showcase where attendees from across the U.S., Canada and Peru shared information about their blogs and got to know each other. Nelson Wong, the founder of AARisings, was given the Lifetime Achievement Award (here’s Nelson’s recap of Banana 2). The day ended with a party in a nearby CBS soundstage.

The sessions were live-streamed, and a Twitter feed of tweets about the conference was projected on the wall the entire time, giving both attendees and presenters more ways to interact with the event.

The experience was so enhanced and professional, and so well-attended that it felt like the conference had already become an established annual event.

Here’s a video that captures the excitement and scope of B2, produced by IW Group:

People have asked the Banana organizers including Lac Su, Joz Wang and me, since B2 for details about B3. This year, Joz, who is co-editor of the 8Asians blog as well as president of the LA chapter of the Asian American Journalists Association, has re-created the conference and we gave it a new name: V3 (Vision. Visibility. Voice.), the Asian American Digital Media Conference

With Joz’ leadership, AAJA-LA has taken on V3con as the presenting organization, and IW Group is returning to help produce the conference. We’re also widening its horizons to include not just blogging but the gamut of digital media — social media, online journalism and video.

As someone who straddles the two worlds of digital media and traditional news, I’m excited to have AAJA-LA’s stewardship of V3con, and the new, enhanced dialogue the organization’s involvement brings to the conference. I’m looking forward to lively discussions about issues of journalism in the digital age, bringing traditional reporters and editors together with a new generation of bloggers and other digerati.

V3con kicks off on Friday Aug. 24 with an Opening Awards Reception hosted by the Pacific Asia Museum in Pasadena. The all-new and bigger and better-than-ever all-day event will be held August 25 at the Japanese American National Museum in downtown LA’s Little Tokyo district.

Look for more details on the website as panels are set and presenters confirmed. Speaking of which, if you think you’d make a great panelist, submit an application and we’ll take a look.

The planning meeting conference calls have been full of exciting ideas, and we have some great sessions in the works. Please join us on August 24-25 for V3con and meetup with Asian America online, offline!

Here are some videos of panels from the B2 Ustream broadcast: