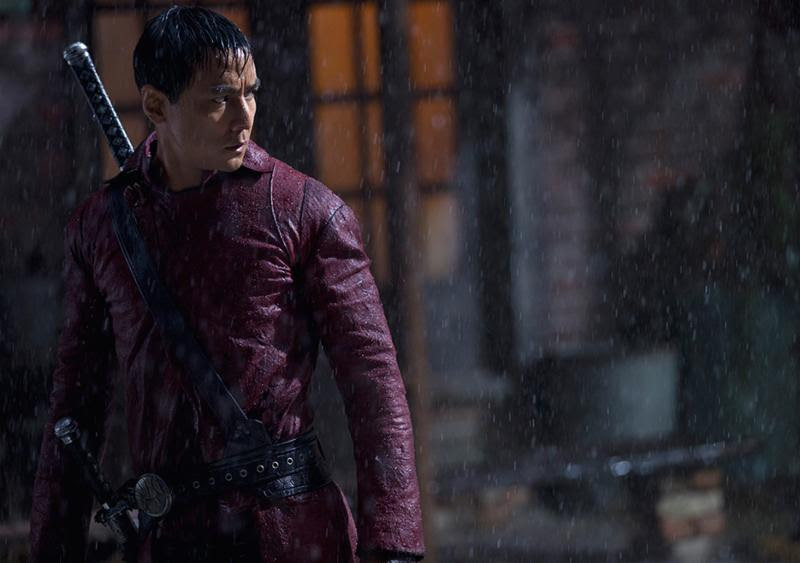 OCA just emailed out a brief statement from Daniel Wu, the star of AMC’s action-drama “Into the Badlands,” that’s worth reading:

“I grew up in America in the ’70s when there were no Asian Americans on screen. After a career of 18 years in Hong Kong where I didn’t have to think about race at all, coming back to America and thinking about when we’ve seen an Asian American lead on a show, I realized almost never.

AMC was adamant that the lead for Into the Badlands would be Asian American. It’s not our intention to transform Asian-American male masculinity across the country through this one show, but “Into the Badlands” is a great start.

Television and American media need to reflect American society. There is a very large Asian-American population in this country and we need to see that on screen. Times have changed, people have changed, and this is a different era than it was even just 10 years ago. “Into the Badlands” is breaking new ground, and that’s awesome.”

It’s an awesome show if you like martial arts and violence, and Wu’s spot-on about the great step this represents for Asian American men on TV. His role joins Steven Yeun and Daniel Day Kim among butt-kicking AAPI hunks.

The show, which to me evokes both another series on AMC, “The Walking Dead” and the “Mad Max” movie franchise for its depiction of a bleak, violent future, brings the martial arts stereotype of Asians full-circle, starting with “Green Hornet” and “Kung Fu.”

The TV series “Kung Fu” debuted in 1972, when I was in high school. It was a cowboys-and-Asians story that starred white actor David Carradine as a mixed-race martial artist who fled China in search for his biological roots in the American Old West.

That same year, Bruce Lee’s now-classic Hong Kong-produced kung fu movie, “Fists of Fury,” was released. Lee’s breakout Hollywood film “Enter the Dragon” came out in 1973. My (white) buddies and I loved Lee’s subtitled kung fu movies for their fierce action. I had been a fan of the actor since his role as Kato in the 1960s “Green Hornet” TV series. I didn’t know at the time that Warner Brothers stole the idea from Bruce Lee, who had pitched a series starring himself as a martial artist in the Old West. Also at the time, I wasn’t noticing the lack of Asian American actors in TV or films coming out of Hollywood. All the butt-kicking Asians I grew up with were in Hong Kong martial arts movies or Japanese chambara, or samurai sword-fight films.

Lee’s cult-movie career sparked a US-wide rage for all things connected to traditional Asian martial arts from kung fu and taekwondo to karate, judo and aikido. The “Karate Kid” movies starting in the 1980s rode the crest of that Asian cultural explosion, and the “Kung Fu Panda” animated movies carry on the torch in movie theaters in ever-more silly albeit enjoyable stories.

But Asian martial arts never made it back to the small screen after the end of “Kung Fu.” That is, until now. By placing the narrative of “Into the Badlands” in the future, when martial arts are the foundation for all fighting, the series strips martial arts of racial stereotypes. It’s simply that this aspect of Asian culture became the standard for the entire world’s culture. And Daniel Wu’s moody, conflicted character, Sunny, happens to be Asian (with no accent, thank you very much) but more important, is the baddest of the badass “clippers” (assassins) who starts the season in the employ of the most powerful Baron in the Badlands. The show’s dark elegance adds to the non-ethnic setting.

Wu is no newbie in the martial arts genre. An Asian American who was born in Berkeley and raised in California, he’s made dozens of martial arts movies in Hong Kong despite that fact that he couldn’t speak Cantonese or read Chinese when he made his first film.

It’s a pleasure to watch him in “Into the Badlands” — as the show’s lead character, he defines a new image of an Asian American man. Kids today can see a role model on TV that’s a lot more powerful than the ones I grew up with.

UPDATE: Read Jeff Yang’s excellent interview with Wu in Slate. It hammers home one point I didn’t mention above, that “Into the Badlands” can be the show that finally breaks through the depictions of Asian men as non-sexual. Here’s why:

It might seem like a little thing to non-Asians, but outside of actors like James Shigeta (“The Crimson Kimono” is a Little-Tokyo-filmed noir classic), and in the very early days of silent films, Sessue Hayakawa, Asian men have simply not been romantic leads. No kissing allowed — especially with women who aren’t Asian! Asian Americans have known this as a fact of Hollywood’s reflection of us.

The most recent egregious example is how Jet Li was never allowed to kiss his obvious love interest, the African American actress Aaliyah, in “Romeo Must Die,” even though the chemistry and sexual tension between the two characters was obvious. The same thing was true in Li’s followup Hollywood production, “Kiss of the Dragon,” even though his chemistry with Bridget Fonda wasn’t as intense. Sure, John Cho was the romantic lead in “Selfie,” a sitcom last year, but it didn’t do well and was quickly shuttered. Cho I’m sure will get another chance….

So the fact that Wu’s character Sunny has a secret but acknowledged relationship with an African American lover give me great hope that the current wave of Asian Americans getting the spotlight in US pop culture is finally going to squash the Asian male sexuality barrier along with other stereotypes.