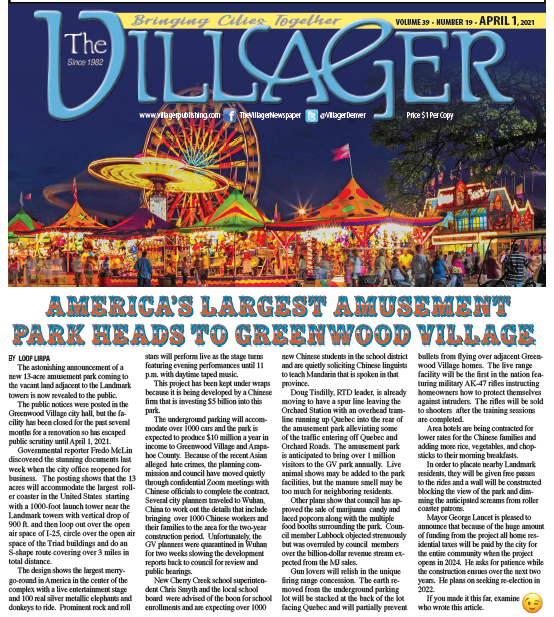 It’s been a tragic and depressing couple of months. Amidst the rising numbers of anti-Asian hate incidents, including harassment, verbal assaults and physical attacks, a March 16 mass shooting in Atlanta targeted Asian-owned spas and six of eight murdered victims were Asian women.

The Atlanta gun rampage added an ugly layer of anti-woman to the anti-Asian hate, weaving together race and misogyny. There’s a long history of fetishizing and exoticizing Asian women as sexual objects, and having a police spokesman dismiss the murders as the result of the gunman with a “sexual addiction” having a “bad day” was a disgusting insult.

The same day as the Atlanta shootings, the national group Stop AAPI Hate released a devastating report stating that the site logged almost 4,000 anti-Asian incidents from March 19, 2020 to Feb. 28, 2021.

Then, in the Denver area, the media coverage of anti-Asian incidents was eclipsed for a few days by the horrible March 22 mass shooting in Boulder, where a gunman killed 10 people in a supermarket. That chilled me as much as attacks against Asians because I shopped at that store hundreds of times when I worked in Boulder.

Although I cynically assumed the coverage of anti-Asian hate would fade from the press radar, the attacks continued, media covered them, President Biden spoke out against anti-Asian attacks and on March 30 he released new actions to fight the violence, xenophobia and bias.

The US Senate also passed the COVID-19 Hate Crimes Act on April 22 by 94-1 with the lone nay vote from Josh Harley (R-MO). The legislation was introduced by Sen. Maize Hirono (D-HI) and Rep. Grace Meng (D-NY) and aimed at strengthening efforts to fight hate crimes, especially against Asians. The House will vote on the bill in May.

Also in April, a bipartisan group of Colorado’s congressional representatives and senators penned legislation to make Amache, the Japanese American wartime concentration camp in southeast Colorado, a National Park. There’s been a lot going on in the AAPI and JA communities!

Amidst all the news – both good and bad – Denver’s Asian American and Pacific Islander community got a surprise blast of bad: a rude reminder that anti-Asian hate can take many forms.

On April 1, The Villager Newspaper, a weekly paper based in Greenwood Village, a mostly wealthy, mostly white suburb south of Denver, ran an April Fool’s “joke” article with the headline, “America’s Largest Amusement Park Heads to Greenwood Village.” A silly but innocuous enough title. But when readers looked below, the text went into the details of the plan to build this amusement park.

“This project has been kept under wraps because it is being developed by a Chinese firm that is investing $5 billion into this park,” the article said. “Because of the recent Asian alleged hate crimes, the planning commission and council have moved quietly through confidential Zoom meetings with Chinese officials to complete the contract.” Note the “alleged hate crimes.”

“Several city planners traveled to Wuhan, China to work out the details that include bringing over 1000 Chinese workers and their families to the area for the two-year construction period. Unfortunately, the GV planners were quarantined in Wuhan for two weeks slowing the development reports back to council for review and public hearings.”

The racist “joke” – clearly inspired by the anti-Chinese racist language from the previous, one-term and twice-impeached president whose campaign was supported by the Villager’s publisher in editorials last year — was outrageously inappropriate given the context of the attacks against Asians across the country.

The article went on to say that the area’s schools are expecting over 1,000 students from China and that the district was seeking Mandarin teachers to accommodate them. And, the piece added that “area hotels are being contracted for lower rates for the Chinese families and adding more rice, vegetables, and chopsticks to their morning breakfasts.”

Not surprisingly, the AAPI community, both individuals and organizations, were outraged by the publication and responded on social media. The daughter of the family-run newspaper replied to comments but never apologized, just defended the article as a spoof.

The old “it’s your problem if you can’t take a joke” line.

She and later her parents who are the publisher and editor, after they returned from an out-of-town trip, doubled down on the April Fools decision and kept pointing out that they’ve covered Asian businesses and individuals in their pages, even giving a prominent Chinese American couple an award in 2019.

Two weeks later, the Villager published a defensive op-ed on its cover saying they’re defending the tenets of free press and claimed they had reached out to the AAPI community but they only set dates and times convenient for them to meet with the Asian Chamber of Commerce and limited the number of representatives they would speak with. The meeting never happened, though the paper still claims they’ve reached out to schedule one.

At the top of the home page for that issue online, the Villager posted a note that included a non-apology apology: “The Villager would like to acknowledge our April Fool’s spoof may have been construed or perceived as inappropriate and offensive and for that The Villager is sorry. It was absolutely and sincerely not the papers (sic) intent.”

The old, “We’re sorry if you took our meaning wrong” excuse, putting the onus on people who were offended.

They’ve since massaged the message to this: “The Villager feels it is important to acknowledge that our April Fool’s spoof article contained words and content that were poorly chosen and we are sorry. It was absolutely and sincerely not the papers (sic) intent to offend our Asian American community or anyone else.”

That same issue also published two letters to the editor – one defending them and one expressing outrage at the article. The pro-Villager letter was written by an Asian American reader. The next page of the issue was a full-page collage of photos and headlines showing Asians represented in the pages of the newspaper, proving their commitment to diversity, including a clip of the issue with the 2019 award they gave to Linda and Jimmy Yip.

The Yips, the local philanthropists who run the Nathan Yip Foundation to build schools in underprivileged areas around the world and in Colorado, subsequently released a statement against the article and asked not to be used as a defense for the Villager. They saw that they were mere props to counter the racism of the article.

The school district and the Regional Transportation Board, which were both cited in the article, also denounced it and stated flatly that their policy is one of inclusion. The school district even kicked out the newspaper from being distributed every week in its schools. The Mile High Chapter of JACL and other area AAPI organizations sent its own scathing letter to the Villager.

An advertising boycott was launched by a group called Colorado Asian American Response Committee (CARC) which was formed last year when anti-Asian incidents were first reported in the state (full disclosure: I’m a member of CARC), and to date, 12 advertisers contacted CARC to say they’ve pulled out of the Villager, and a total of 30 advertisers who were in the April 1 issue are no longer in the past two editions of the weekly. One advertiser, a real estate agency, sent a blunt letter to its clients and business networks decrying the racism of the Villager’s article. Here’s the link to the Villager Advertiser Boycott Toolkit.

The media have not surprisingly picked up the story, adding to the Villager’s embarrassment. Members of CARC and the Asian Chamber of Commerce as well as Asian Americans who live in the area where the Villager is distributed contacted the media and were interviewed, both on TV news and in the local print and online news media. A Denver Post article was picked up by the Associated Press and was published in various newspapers across the US, from Washington DC to Oregon, and Nebraska to Arizona.

With the public’s short attention span and the media’s constant search for the next story, the Villager’s racist article has faded from the headlines.

But it’s now May – AAPI Heritage Month – and I’ve already received a query from a reporter asking if there is any update about the Villager, as well as other stories. CARC and other organizations are fielding calls and emails from other local media about stories to cover, from continuing anti-Asian hate incidents to the current effort to commemorate Denver’s historic Chinatown district, to stories about JA incarceration and Amache, the camp in southeast Colorado.

If nothing else, this past year of hate against Asians has awakened the country to the constant presence of racism against Asians, and helped the media begin to seek out better, deeper and more important stories about our communities. For that, I suppose, we owe the Villager a small bit of acknowledgment for their ill-timed and stupidly conceived blast of racist humor.