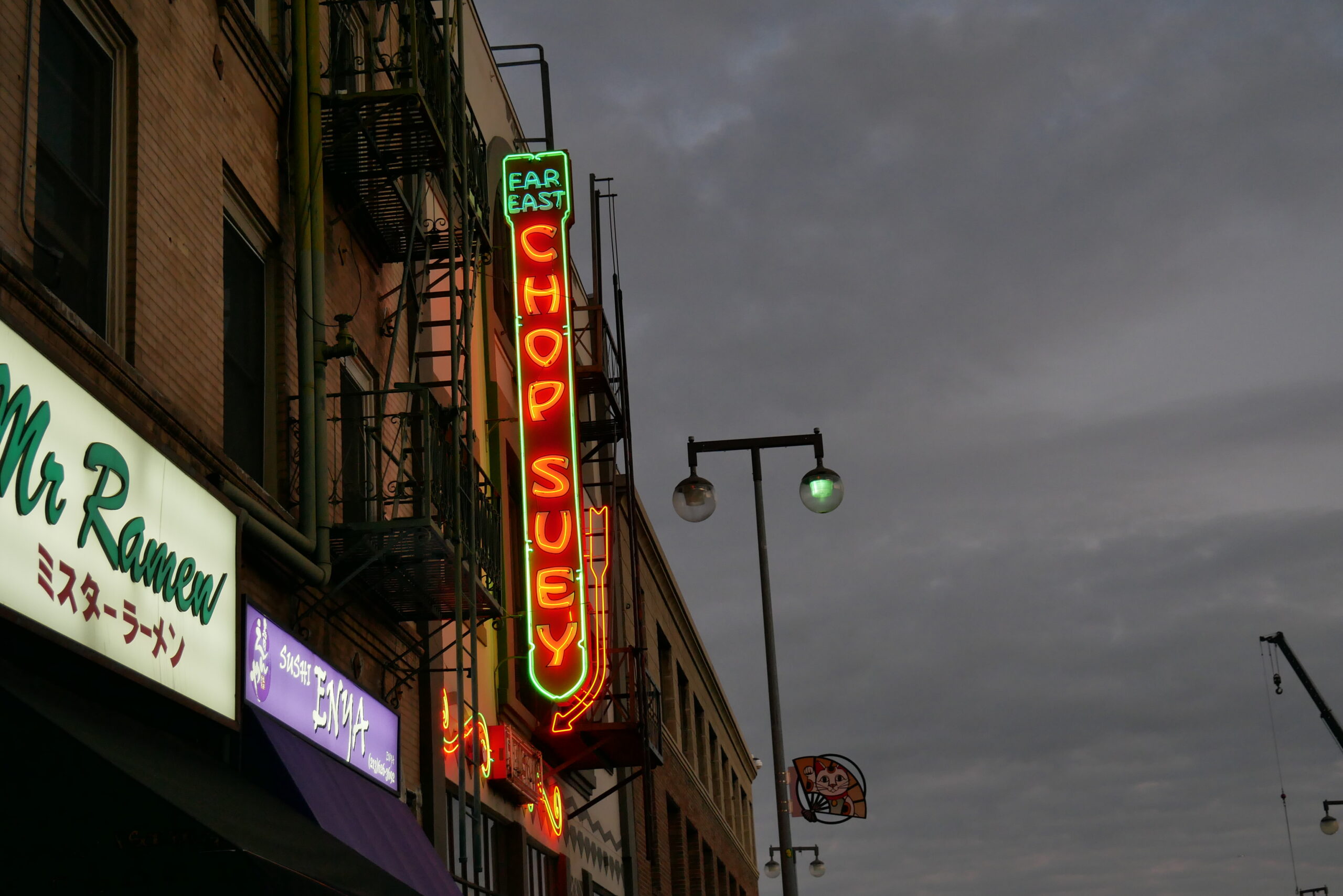 In her excellent book “The Fortune Cookie Chronicles: Adventures in the World of Chinese Food,” former New York Times journalist Jennifer 8 Lee explained that the fortune cookie isn’t a Chinese post-prandial delicacy at all, but rather a Japanese confection created first in Kyoto temples, adapted by Japanese Americans with little messages inside. Chinese restaurants happened to pass them out after meals to their customers, and then took over the manufacturing when Japanese Americans were sent off to concentration camps during World War II. Lee also wrote that there are more Chinese restaurants in the United States than McDonald’s, Wendy’s and Burger King combined.

Those restaurants sprouted many decades ago. Chinese food caught on the U.S. in spite of the “yellow peril” hatred against Chinese immigrants in the second half of the 19th century. In fact, by the early 20th century, there was a full-on craze for Chinese food – especially chop suey and chow mein, the version of the same meat-and-veggie stir-fry over fried noodles instead of over rice. Anyone who’s visited Little Tokyo in Los Angeles has seen the historically designated “Chop Suey” neon sign just a few doors down from the Japanese American National Museum, on the same block as several restaurants that these days serve ramen, not Chinese staples. (See photo above.)

Check out this terrific video featuring Lucas Sin, who was just named one of Food & Wine’s “Best New Chefs of 2021.” He gives a great rundown of the history of Chinese food in America, and shows you how to make Chow Mein, Hong Kong style:

The popularity of Chinese food with the hipsters of a century ago grew even though just decades before, Americans questioned whether Chinese ate rats in their restaurants. Chop suey has several origin myths including how some camp cooks working on the railroad crews in the West threw some leftovers and whatever was available into a wok and cooked it up, or that a chef traveling with a Chinese diplomat invented it in a San Francisco hotel because the uncouth Americans didn’t have anything good to eat on their menus. Scholars have traced Chop Suey – or something like it – to China. But author Lee writes in her book that Chinese people don’t know what Chop Suey is, any more than they know what fortune cookies are (or General Tso’s Chicken or Beef with Broccoli, all American Chinese dishes).

One reason there were so many Chinese restaurants, even a hundred years ago, is ironically because of anti-Chinese racism. The 1882 Chinese Exclusion Act, which wasn’t repealed until during WWII, banned immigration by Chinese… except for some business owners who needed to go back to China to hire workers. In 1915, restaurants were added to the list of qualifying businesses. And magically, Chinese restaurants sprang up everywhere, staffed by fresh immigrant employees. They arrived just in time for the chop suey and chow mein fad. (Even then, anti-Chinese sentiment by many Americans still simmered – a Chicago law prohibited white women from working in Chinese restaurants.)

Those dishes were popular well into the 1960s, although today there’s more interest in the varieties of authentic traditional, regional Chinese cuisine with the global increase of educated palates. Still, who doesn’t love calling up a local mom-and-pop American Chinese joint for a takeout box of the Americanized stuff?

It wasn’t just the Chinese who capitalized on the popularity of food supposedly from China.

If you grew up in the postwar America of the 1950s-1970s, you probably ate cans of Chun King Chinese food. Chun King was founded in 1946 and by the time it was sold by RJR Nabisco to a Singaporean company in 1989 (a weird historical circle if there ever was one), Chun King was the second largest producer of “canned Oriental foods.” The market leader is La Choy. La Choy was founded in 1922 by a Korean businessman, Ilhan New. Chun King was the brainchild of the son of Italian immigrants, Jeno Paulucci.

Paulucci got the idea to sell prepared Chinese food in a can when he saw bean sprouts in a Minneapolis shop and found out they were easy to grow. He cooked them with chicken (and he claims, some Italian spices) and began his food empire. He expanded into other canned Chinese dishes and then frozen products, including Italian such as pizza.

Then he had another entrepreneurial flash: He wrapped pizza toppings in a Chinese eggroll skin and – voila — Jeno’s Pizza Rolls were born in 1967.

Yes, he named them after himself. These days you’ll find them in the freezer case of your supermarket as Totino’s Pizza Rolls.

It’s weird to think that one of the most familiar brands of Chinese food in supermarkets came from an Italian American. It’s even weirder to think the same guy invented the mashup of eggrolls ad pizza to give us the perfect oven- or microwaveable snack to watch TV with, or ward off midnight munchies.

Appropriation? Yep, mixed with a dash of appreciation and a healthy heaping of accommodation. That’s how Asian food gets absorbed into American culture – restaurants that serve Americanized versions of food that may or may not have roots in China, or “Oriental” foods that weren’t even created by Chinese.

Japanese food is going through an absorption too – we’ll have to wait and see how Japanese cuisine evolves as it becomes Americanized (yes, the California roll is a big part of that process).

NOTE: This post was originally written for the Pacific Citizen newspaper, as my “Nikkei Voice” column, which has run (more or less) since 2001 or so.