04 Jun A musical perfect storm: U2 live at Red Rocks

Posted at 16:11h in music by Gil Asakawa
Share 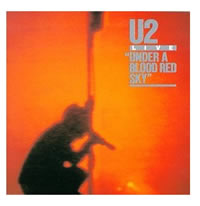 The combination of the two established U2 as world-class big-time rock stars, not the scrappy new-wavers who played clubs and small theaters. MTV loved the energetic performances amidst the dramatic, almost otherworldly, setting. Radio stations caught on to the band’s talent, and U2 hit their stride. In the years since, the concert was hailed as a seminal moment not just for U2, but for pop music: Rolling Stone magazine named it to its list of the “50 Moments that Changed Rock and Roll.”

For years the video was a staple on public television programming, but has never been available in DVD format. But this year, with the 25th anniversary of the concert upon us, the band is re-releasing the CD, remastered with bonus material on June 24, and later in August, the video — finally on DVD.

Back in 1983, I was the music editor for Westword, Denver’s weekly alternative paper, and was eager to see U2. I liked their earliest releases, and especially the ringing rocker from the album “Boy,” “I Will Follow.” But I had missed them when they performed at the 1400-seat Rainbow Music Hall in Denver, so this was my first chance to see the Irish group. I liked their new album, “War” with its catchy, anthemic songs, and I was a fan of guitarist Edge’s droning, saturated guitar riffing.

In the days leading up to the concert, the promoter, Barry Fey, had announced that the band’s management had arranged to shoot a concert video at the historic and quite scenic Red Rocks Amphitheater in the foothills overlooking Denver. U2’s management brought over its recording producer, Steve Lillywhite, to oversee the recording. Feyline, Fey’s company, worked with its production company, TTS, to set up the videotaping.

The amphitheater, built during the Depression as a Civilian Conservation Corps project, is flanked by two enormous outcroppings of jutting red sandstone (one is aptly named “Shiprock”). It had already been somewhat immortalized in pop lore already: A fan had died climbing during a Beatles show in 1964. In the mid-’70s Jackson Browne recorded part of his hit album, “Running on Empty,” at a Red Rocks performance and put a double-page photo of the Red Rocks show in his album booklet (I was in row 54 or something like that, but alas, not visible in the photo).

In 1978 I was listening to a New York City radio broadcast of a Bruce Springsteen show — a homecoming after his groundbreaking U.S. tour for his “Darkness on the Edge of Town” LP, and in a backstage interview during intermission, Springsteen waxed poetic about the only outdoor venue he’d ever agreed to play up until then: Red Rocks. I started screaming at my college roommates about the magic of seeing shows at Red Rocks (I’d been at the Springsteen concert that summer).

So it was a perfect setting for U2’s breakout performance.

Except for the cold, rainy weather, a risk in Colorado any time of the year. The weather was so lousy, in fact, that if the band hadn’t already invested truck fulls of money to film the show, and planned special effects such as the fires that roared on the rock towers on the sides of the stage — no, fires at Red Rocks are not standard for every concert — it surely would have been canceled. U2, showing its empathy for its audiences, arranged for a rain-date concert the next night at the CU Events Center in Boulder (an echo chamber that turns concerts into audio mud), but singer Bono went on all the local radio stations and urged ticket-holding fans to come to Red Rocks to see them there and then enjoy a free second show the next night.

I probably scribbled notes and have them squirreled away somewhere for posterity, but I have vivid memories that require no notes. I had tickets around the 25th row, but I spent half the show perched on a guard rail, at the end of the second row stage left.

The day’s off-and-on drizzle barely dampened the spirits of the fans, and watching the video later, I was amazed that the filmmakers made the audience look like a sell-out instead of a densely-huddled mass close to the stage, trying to share its collective body warmth.

Because of the cost of the video production and live recording, I assume there had been weeks of planning and preparation for the concert. A lot of it must have been punted away because of the conditions. But you’d never know anything was amiss from the audience’s perspective.

Everything seemed unrehearsed and somehow magical — a dorky word for a card-carrying rock critic to use, but it seriously ranks as one of my five all-time musical experiences in my music-journalism career (at least two more also took place at Red Rocks).

The songs were terrific; the performance rocked, and the band was so… charismatic. At one point, the rain stopped, but the air was still cold — in the 40s. Whenever someone opened their mouth, you could see their breath in the spotlight. When Bono took off his shirt, the steam came off his chest like a special effect. When he grabbed the white flag and marched around, it felt improvised. When he grabbed the young woman for a dance on stage, that felt real, not faked.

The mist and the fire made for a mystical backdrop for the music. It was miserable, but fantastic.

The 25th anniversary of that show has stirred a lot of memories. Here’s my friend G. Brown’s take on Examiner.com. Like me, he was there that night.

And here’s a Denver Post article by music critic Ric Baca about the anniversary.

DD Thornton, a music fan and radio veteran in North Carolina, is covering this anniversary with a bunch of articles and audio interviews for her online radio show, Deaconlight.com, which airs at noon ET weekdays as part of ErrorFM.

She’s asked me to do a phone interview in the weeks to come about my memories of that night, so I’ll post an update when we choose a date.

I look forward to hearing the re-release of the album (I wonder if it’ll be all Red Rocks performances this time?), but I’m really looking forward to the DVD of the show. Although VHS versions of the performance are available used, the video quality was reportedly not up to par for digital re-release. Many fans had given up hoping for a digital version; whatever they did to make this happen, I’m grateful.

It’s an artifact of one night when weather and art came together to create a perfect pop culture storm.

Update: I’ll be on DD Thornton’s “Deaconlight” Internet radio show on Tuesday, July 24 at 1pm EDT. Tune in by clicking to errorFM.